Now that the vanity was demo'd, it was time to paint.  I originally thought to tile first, but decided against that since I would have to wait for adhesive to dry and then for grout to dry and that would take at least 2 days.  I had a hard time in deciding on paint colors - I originally envisioned in a light gray color, but every sample I tried wasn't working. 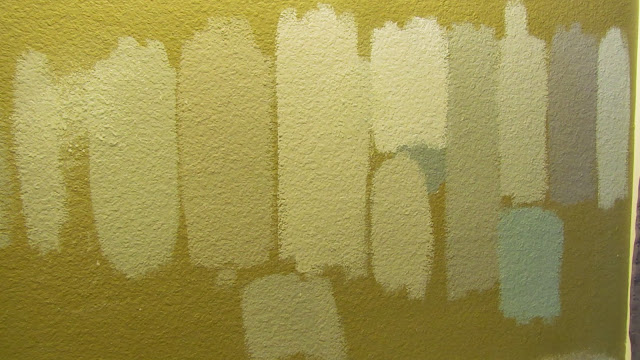 With the horrible lighting in the room, it was hard to get a picture of the true colors, but all the gray colors I picked were either looking on the blue-ish or beige-ish.  I wanted something that was more of a true gray, but a light shade of it since the room gets no natural light.

I narrowed it down to 3 colors.  Sharkey Gray by Martha Stewart - I really liked this color, but it was more taupey than I wanted.  Silver Drop by Behr - I also really liked this one and is a nice, light color.  Lamb by Martha Stewart - this was almost white, but in the bathroom had a slight gray-tone.  Honestly, I wasn't even 100% on my color choice until I got to Home Depot to buy the paint.  I ended up with Lamb and I'm happy with how it turned out.  Like I said, it's almost white with a slight gray undertone and you can really see that in the bathroom (I painted a swatch of it in the hallway and you can see the undertones less because of the better natural lighting).

I had to do some prep work first.  I patched up holes and had to texturize some areas that needed to be sanded down. 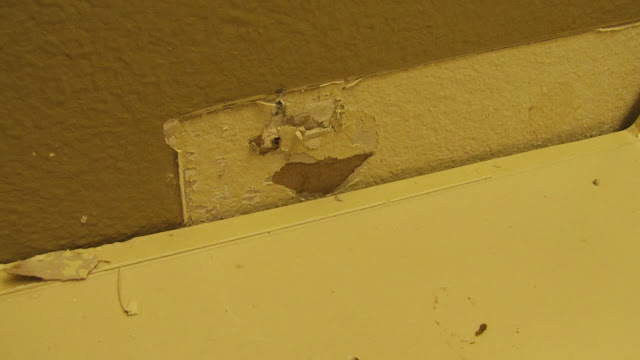 After we removed the countertop, you could see a line from where they caulked it along the wall.  So, I sanded that down with my multi-tool. 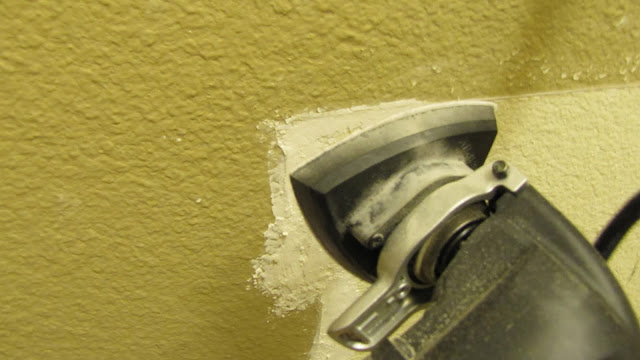 Once that was done, I sprayed some Orange Peel texture onto the wall to match.  I actually had to do this part twice.  After I sanded & sprayed texture, I didn't think it looked right.  After staring at it for a few minutes, I realized that I didn't use the correct grit of sandpaper - it didn't really sand down enough of the caulk.  So I chose the right grit, re-sanded, and re-texturized. 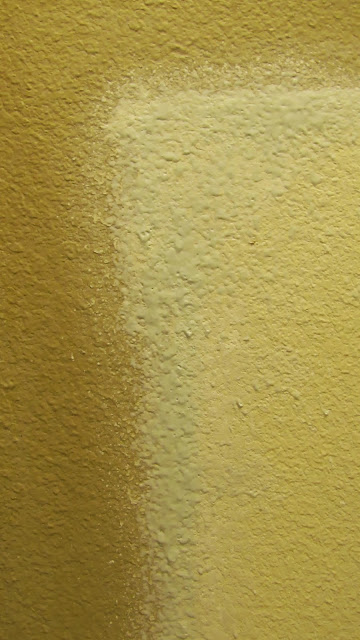 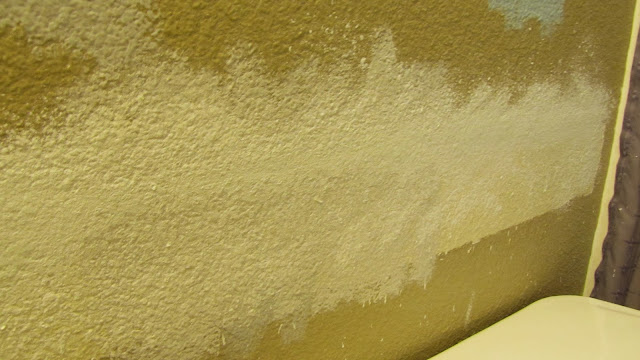 Since the bathroom gets a lot of moisture,  I did a quick wipe-down of the walls.  Now, this is where I kind of messed up - I should have not wiped down the area that I had texturized.  Even though it was now dry, the damp rag moistened the texture and ruined the effect.  Ugh.  I didn't have enough left in the can of texture to cover the entire area again, so I just covered as much as I could.  Oh well - it's better than it previously looked.  Live and learn, right?

I also used this little trick I found on a blog…the trash bag wasn't big enough to just put over the tank, so I had to tape it, but it worked out fine and I could still use the bag for trash.  :) 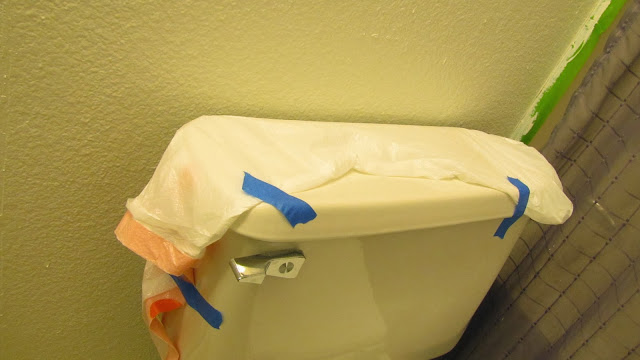 I also bought this handy dandy paint cup.  Hahahahaha!  I just scrolled down to the picture and noticed that it's called "HANDy Paint Cup".  It also has a magnet inside so it will hold your paint brush like so. 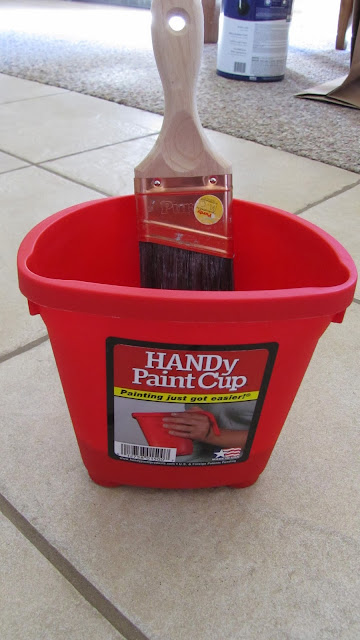 I took care of all the cutting in and it took FOREVER.  Cutting in around a ceiling, shower, toilet, light fixture, medicine cabinet, towel holders, baseboards, and pipes, is no.joke.  That part took the longest.  Once I was done, I just used a small roller to paint the walls (since the bathroom is small with smallish areas, that worked best).  It took 2 coats.  And look at how bright it looks now with the new paint color! 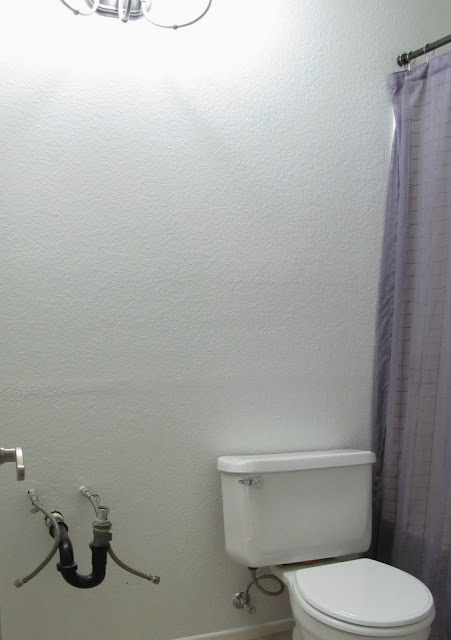 I also caulked around the shower, since it was never done, and that looks so much better now too. 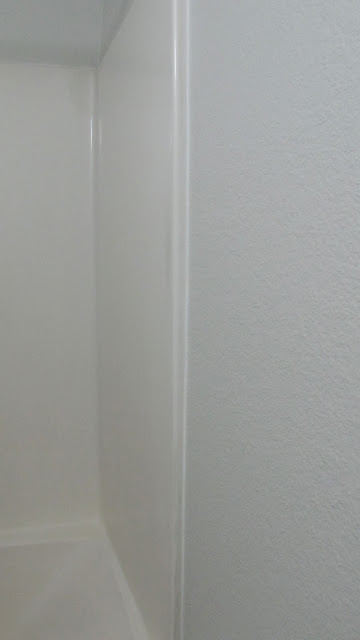 Did you notice the much better lighting in the last 2 pictures?  (they were taken at night)  That's because of these bad boys. 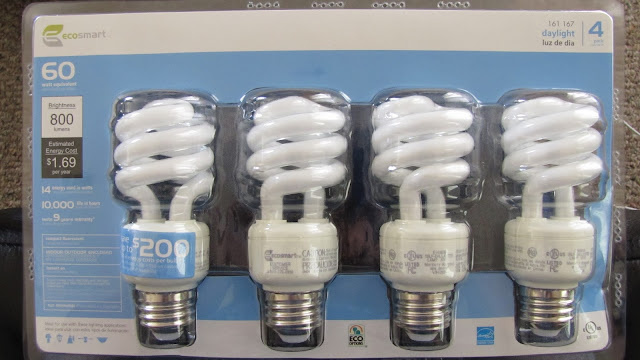 They're Daylight lightbulbs that I bought at Home Depot.  They were $6 for this pack of 4 - not bad.  And they are also energy savers.  It truly looks like daylight now when I turn the lights on.  And compared to the regular lightbulbs in the rest of the house, they look so bright and fresh!  The others look so yellow!  I'm going to slowly convert everything to these now.

So, here's a before and after of the paint color and how much brighter the room is now. 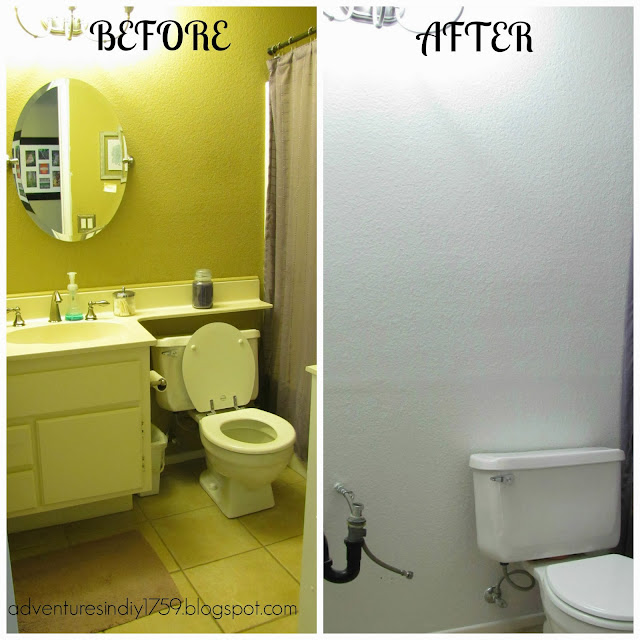 The baseboards are the next step, so stay tuned!