Adventures in Fixing a Window Screen

I'm still working on the bathroom and there's nothing new to post yet, so we're going to take a little break from bathroom posts for now.  :)

One project that's been on my list for a loooooong time, was fixing the screen for my window sidelites next to the french doors.  I had a friend's dog staying with me for a few days and let's just say, he didn't like being by himself while I was at work.  And so he took it out on the sidelite screens - he bent the frame on one of them and chewed and clawed holes into the mesh screens on both.  My friend fixed the one with the bent frame, but I needed to fix the other one.  A history on these screens - when I first bought the house, one of the screens was missing and the other was damaged.  I couldn't just buy them at one of the big box stores - I would have to custom order and I was looking at about $100.  Per screen.  Did I mention there's 2 screens?  Ouch.  Me no likey.  Fortunately, I knew someone at the time, who could make them and all I had to do was buy the screen and the framing and I saved myself a ton of money.   This time around I fixed it myself and the process was pretty simple (just rough on my wrist). 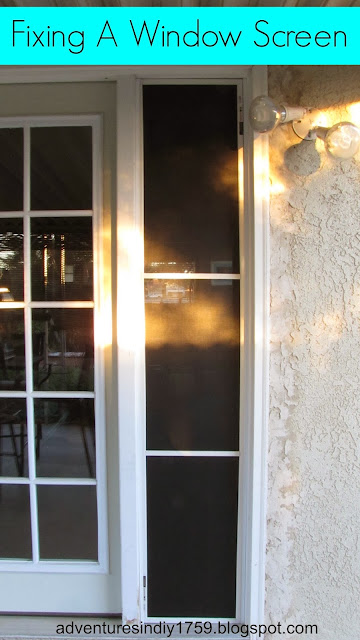 It was really hard to get a picture of the damaged screen because of the see-through mesh screen, but there were holes all over.  And dirty paw prints. lol

I already had some screen leftover from when these were made years ago and the frame was still in good shape, so thank goodness this didn't cost me anything to fix it.  Oh wow, this is a blurry picture, but these are the supplies I used.  Oh and needle-nosed pliers.   That tool, 2nd from the left, with the white wheels on the both ends - this is the main tool you'll need for the job (I'm not sure what it's called, though). 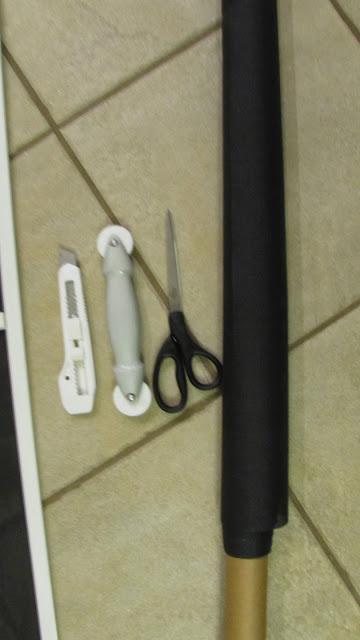 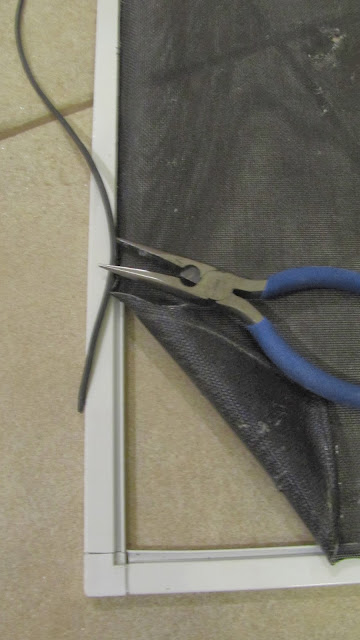 Take it all out until you're left with just the frame. 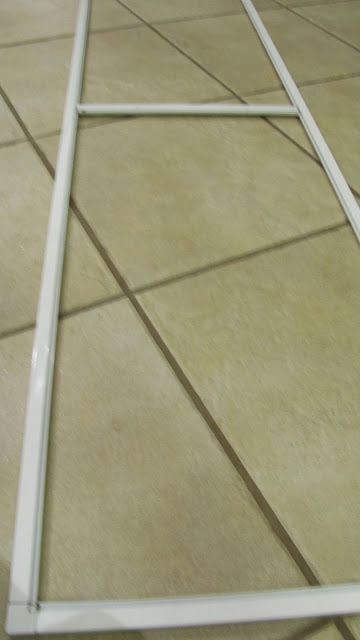 Once the screen and rubber pieces were out of the frame, I lined up the frame against the lines of the tile on my floor.  This helped me to keep the frame straight.  Since the frame moves and bends easily, you'll need to make sure the frame is kept straight so it fits into the window space. 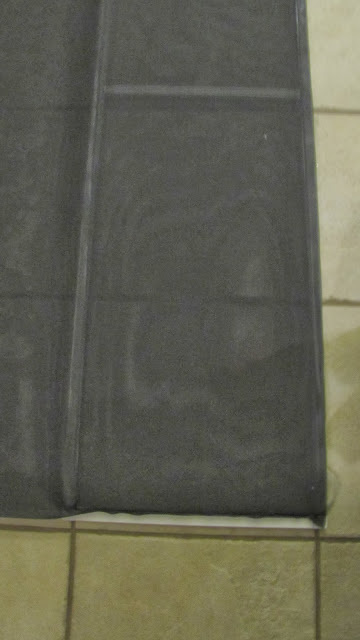 See in the picture above how I lined it up both horizontally & vertically to the lines of the tile?  This helped a ton!  (I actually had to make the frame twice because I didn't keep it straight the first time and it wouldn't fit into the sidelite space).  Seriously - it's very, very important that you keep it as straight as possible!

You'll just lay the new screen mesh on top of the frame.  Using that tool I told you about, you'll roll the rubber pieces into the track on the frame.  This is what holds the screen tightly into the frame so it doesn't fall out.  And this is what kills your wrist.  Because you will often have to roll over the same spot several times to make sure the rubber piece is in there nice and snug. 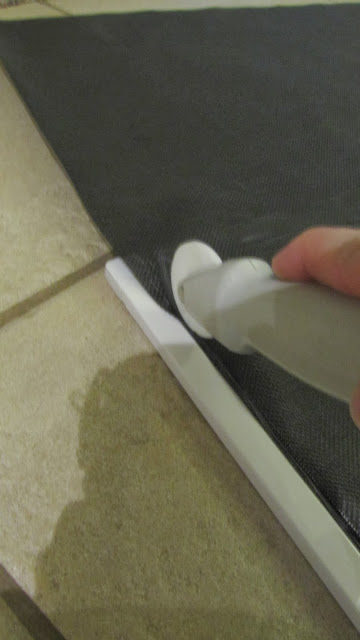 Here it is after I've completed all 4 sides.  There was still a bit of screen leftover on the top and left. 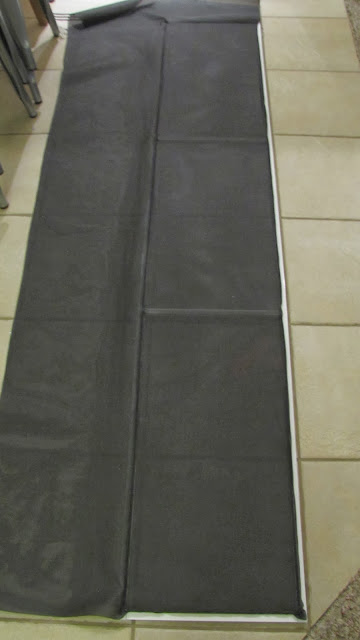 You'll just use your utility knife to cut those leftover pieces and clean up the edges.  Just cut all along the edges right above where the rubber piece is laying. 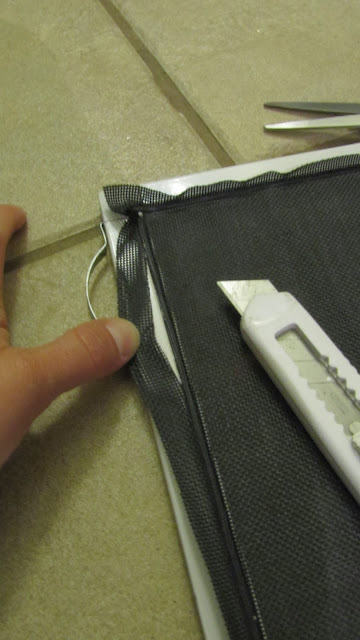 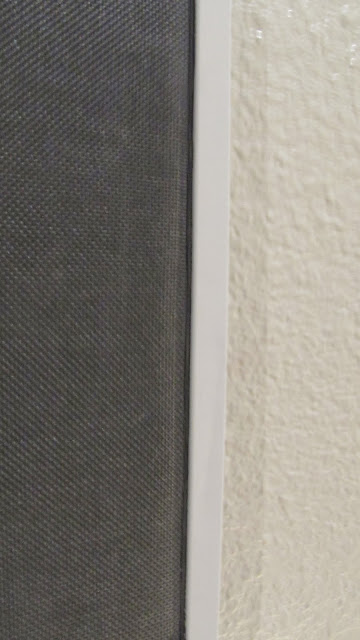 I don't know what these are called, but they are basically springs that allow you to put the screen frame into place more easily. 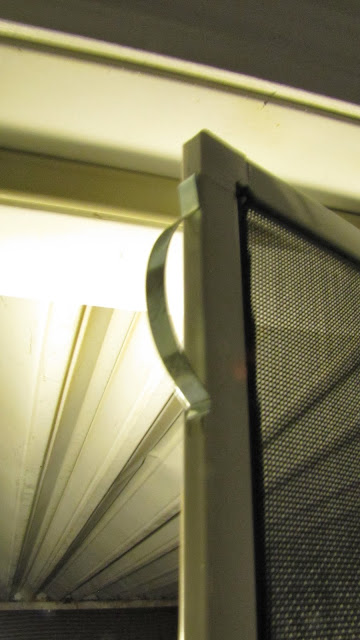 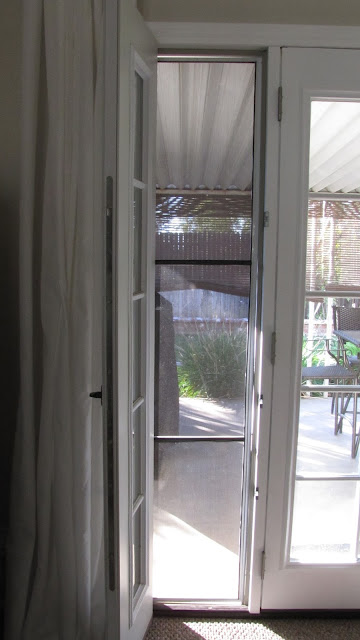 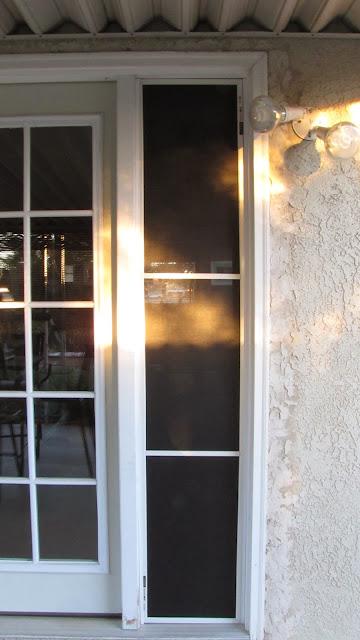 When it's not super hot and the afternoons & evenings are nice and cool, I like to open these doors - it actually does cool my house down considerably without having to turn my air conditioner on.  I'm so glad I finally got this done!