Ahhhhh, yes!  An extremely exciting topic here....NOT!  :)   The very last thing on my "to do" list from last year (yes, you heard right - last year) was to clean the blinds in my house.  It was going to be a big task because in the 3 years that I've owned my home, I have never cleaned them.  Yeah, I know, I know, but don't be disgusted with me, ok?  Actually, when I first got the house, they were already pretty dusty and back then, I had no idea about all these helpful cleaning tips, so I tried cleaning them with a household cleaner I had with paper towel.  Well, let's just say that I got through about 1/2 of one of the blind sets and stopped because I went through a lot of paper towels and it didn't seem to be cleaning very well.  I decided that I finally needed to get this done because I have guests coming for a week-long visit in a a few weeks and well, it's just a good excuse to finally get some of this stuff done that I've been procrastinating on.

So, I found this cleaning tip for blinds on Pinterest.

Now, I know white vinegar is great for cleaning (it has worked wonders for me), but I also hate using it because I cannot stand the smell of vinegar.  Blech!  But, I gave it a shot - especially because one of the sets of blinds had a bunch of spots all over the back side.  Let's check out some before pictures (this was all done at night, so please don't mind the night time pics). 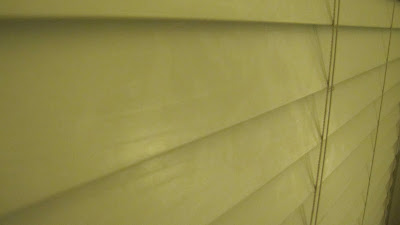 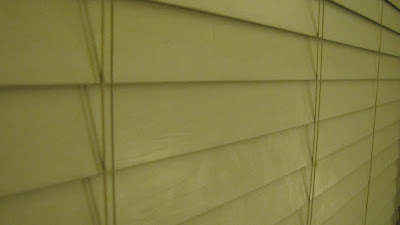 It's sort of hard to see in this picture, but the dust was pretty bad (you can see some finger marks there).  This is the set in the master bedroom.  I did the first 4 slats the exact way that the link states to.  I didn't feel like it was doing anything special, plus the wet sock on my hand was driving me crazy (and boy, did that vinegar smell stay on my hand for a couple of days) - it was like a puppet show gone wrong.  So, I decided to try a different route and it's what I ended up using for all the blinds.  I took each slat out from the strings and just used a mixture of water and Dawn with a sponge and wiped both sides of the slat down (the tougher spots got a good scrubbing).  I then made sure to dry them off with a towel and slid them back in the slots.  Easy!  I did notice that there was some sun damage to many of the slats - some of them were yellowed in areas.  Hmmm - maybe spray paint would do the trick?  Although, that sounds like a pain in the booty to spray paint all of those.  I think I can live with them as they are.  :)

Here are the after pictures - much better! 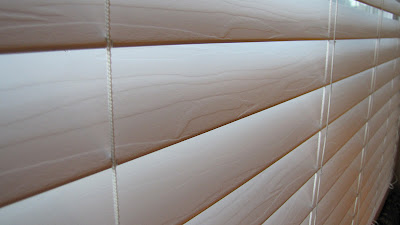 The guest bedroom blinds had a bunch of spots on the back. 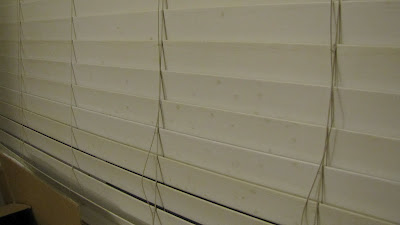 At first I thought it was some kind of mold, but I found another similar spot on these blinds and it was in the shape of finger prints.  So, I think it was some kind of oily/greasy substance that got on the blinds, never was cleaned, and then the dust just stuck to the spots like crazy.  For the spots, I actually dabbed the Dawn on them directly and for the most part, the spots came out.  Some spots, you can still see, but only very lightly. 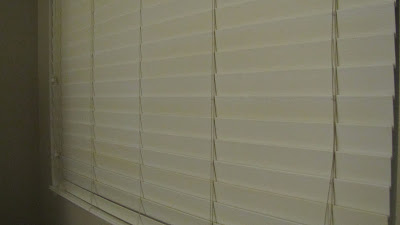 Tons better - you can't even see the spots anymore in the picture.

So, what did I learn from this?  #1  Water & Dawn seemed to do the trick.  #2  I have resolved to give the blinds a good dusting with my Swiffer once or twice a month so they don't get this bad again.  YAY!  Another thing checked off my list and I'm officially done with my 2011 list.  :)

Thanks for stopping by!
Posted by http://adventuresindiy1759.blogspot.com/
Posted by Chrissy @ Adventures in DIY at 1:52 AM