I'm still slacking in the blog post-writing department.  I spent Father's Day weekend in San Diego visiting with my dad.  We had a great time watching my brother's pop-punk band, So Long Davey!, play at the Del Mar Fair.  You should click on the link and check them out - they are pretty darn awesome!  Anyhoo, after I got home, I had to clean up the mess from when I painted the interior doors.  This week, I've been cleaning up and trying to get everything ready since I'm having a BBQ this weekend, so haven't had too much time to do much else.

I was going to write a post today.  Well, technically I am writing a post.  Ahem.  What I mean is...I had intended to write a post about a crafty project I did the other day.  But, when I attempted to upload the pictures, I wasn't able to.  I have an older Macbook (about 6 years old) and it doesn't have as much memory as the newer ones.  I even installed more memory awhile back, but wasn't able to put in as much as the newer Macbooks allow.  So, every once in awhile, I have to clean it out.  And apparently this is one of those times.  So, I'm not able to write my post until that happens.  After this weekend, I'll have a bit more free time for posting and projects.  I will be having company in July for a week, so I'm planning on doing more sprucing up around here.  :)

Thanks for hanging in there and stay tuned...

P.S.  I was going to at least include the other picture from when I went to the Cars Land preview at Disney's California Adventure a couple of weeks ago as seen in this link, but the Disney PhotoPass website it down right now.  I just can't win for losing tonight!  So, I'm including the picture that I already updated to that post in case you didn't see it yet.  And here's a thought - I just might write up a post to give my review of the new Cars Land.  Hmmm... 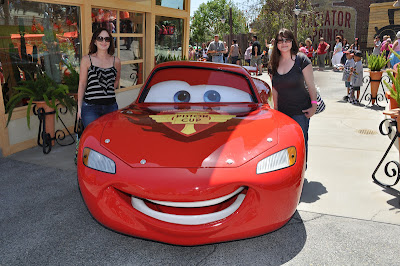 Posted by http://adventuresindiy1759.blogspot.com/
Posted by Chrissy @ Adventures in DIY at 12:17 AM