Click on the link to see Part 1 of this series in which I explain how to remove painted-on screws & hinges.

I decided to work on one set of doors at a time - for me it just made the process easier.  After the hinges were removed, it was time to strip the paint off of them.  Why did I want to strip the paint off the hinges, you ask?  I thought it would be a nice detail and also because usually when hinges & their screws are painted over, it looks sloppy.  So, I searched the internet & found some different ways to strip the paint and decided on this process:  use water & dish soap.  It sounded a bit strange, but there were several posts that swore by this process and when I mentioned it to my dad, he seemed to know about this and said it should work.  And it did!  Here is a step-by-step process...

1)  Using an old pot, fill it up with water and pour some dish soap in.  There were different suggestions on how much soap to use.  I just eyeballed it and poured some in.  Also, make sure to use a pot that you won't be using for food again.  I had this Ikea pot that I thought it would be great for making spaghetti, but it took forever to boil the water, so I only used it once in like 3 years. 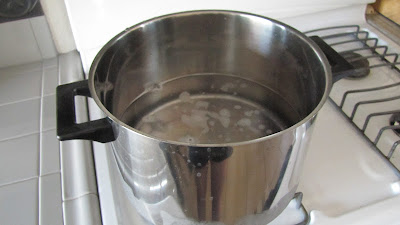 2)  Bring the water & soap to a simmer, not boil.  Once it's good and simmering, add your hinges. 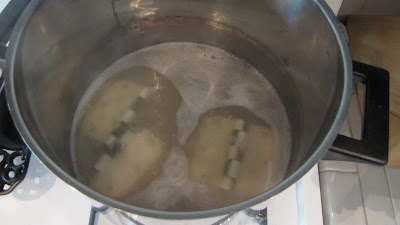 ***Make sure you put enough water in the pot.  This mixture seemed to evaporate very quickly!  Let's put it this way - I learned the hard way.

3)  The first set of hinges, I let the hinges simmer for 30 minutes.  This didn't seem like quite enough.  So, the second set I let simmer for an hour.  This seemed to work better.  Make sure to take the hinges out with a pair of tongs because the hinges will be HOT!

4)  Start peeling the paint off the hinges.  It was actually pretty easy at this point. 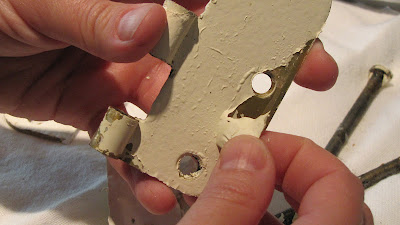 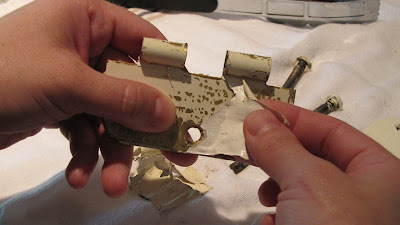 5)  The 2nd picture right above shows that there was a second thin layer of paint that for some reason was hard to get off.  Anything that didn't come off the hinges, I just took a very fine sanding block and sanded it all off.  Some parts I couldn't remove, but I got most of it off.  It's ok - didn't have to be perfect. 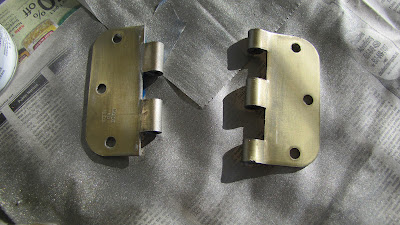 Sure, I could have bought brand new hinges,  but at $3 a pop, it would have cost me over $40 just on hinges alone - and I was not planning on spending much money on this whole project at all.  Stripping the paint off the hinges didn't add any extra time to my project either because I did it while I was waiting for the paint to dry on the doors, so buying the hinges wouldn't have saved me any time.  This whole process was actually pretty simple and fairly easy, so I'm glad I did it rather than spend the money.
Posted by Chrissy @ Adventures in DIY at 11:45 AM