Since I haven't had many projects to show you lately,  I have a back-up post for you.  Hopefully, you won't be bored to death.  zzzzzzzz  :)

The town I live in is not super small, but it's not huge either.  According to Wikipedia, as of 2010 my town's population is 36,877.  I love the small-town feel around here, but knowing that I'm close enough to decent shopping, restaurants, and entertainment is great.  Anyhoo, I wanted to share some of the wildlife I've seen around my house since I've been living here.  It's not like the wildlife that my bff gets at her house, but it's something (actually, some of her wildlife I wouldn't want at my house.  Tarantulas?  Snakes?  No thank you!).  Here are some scenes from around my house...

Have you ever seen a hummingbird sitting still and not constantly fluttering it's wings?  Well, here you go! 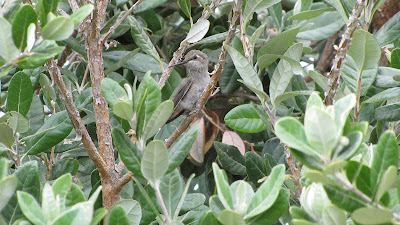 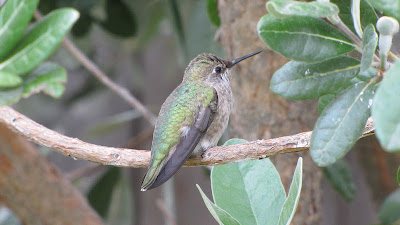 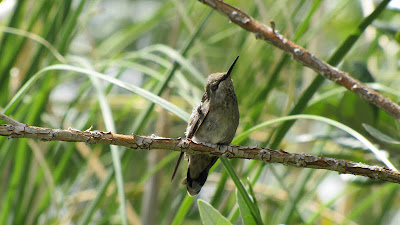 I have a pink & white salvia bush that constantly attracts hummingbirds so I see them quite a bit.  I really want to pull it out since it has overtaken the spot that it's in.  It used to be just next to a gate in the backyard, but has now completely grown in front of the gate, so the gate is completely inaccessible.  I have since trimmed it down, but it's got a lot of dead branches on the inside and is kind of stinky.  Anyways, I fear that if I get rid of it, the hummingbirds won't come anymore.  So, maybe if I pull it, I'll get a new & much smaller salvia and plant it in a different spot?  We shall see.

Next up, we have some baby birds. 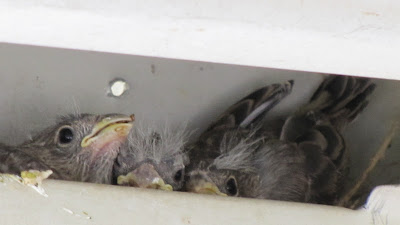 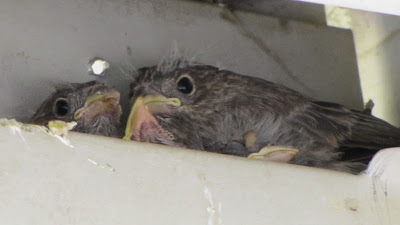 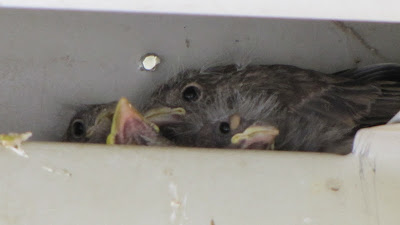 Mama bird decided to put her nest in a nook & cranny up in my back patio cover.  It was kind of neat to hear them chirping, but it got a bit annoying after awhile.  Just being honest.  ;)

Another mama bird decided to put her nest in one of the sweet gum trees in my front yard. 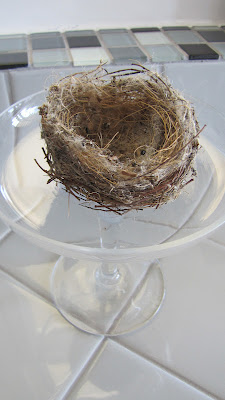 I didn't see any of the babies.  In fact, I don't know if any of them made it.  I found a teeny tiny broken egg on my front walkway one day and then my nephew found the nest in my front yard soon after that.  (I think there are some bits of dryer lint in the next. haha)

And because I don't want to end my post with this grossness, I'll put this in the middle of the post. Here's a swarm of bees that decided to try to make my garage their home. 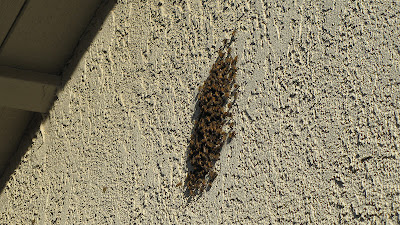 Disgusting right???   I originally sprayed all these guys as well as the ones that managed to get through the vent and into the garage.  But by the next day, more showed up.  That's when I figured out that their queen managed to make her way into my garage and behind the cabinets to start a nest.  I have more pictures, but I'll spare you.  Ick.

I just saw this guy the other day.  Cute little squirrel. 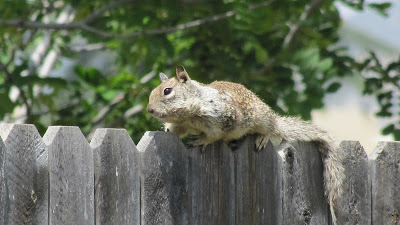 I see these all the time in the parking lot at my work.  The baby squirrels are actually very cute.  But, when they decide to crawl up into the engines of the cars parked in the lot and cause lots of damage - well, that's when they're not so cute.  Little buggers.

Check out this cool guy! 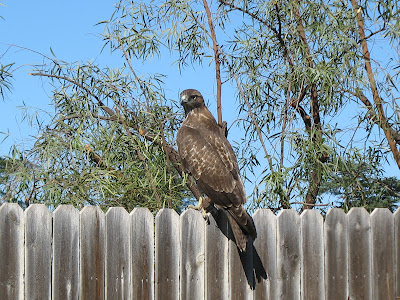 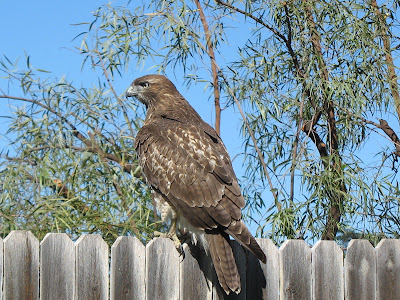 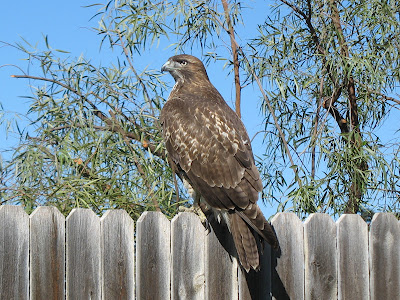 I'm pretty sure it's a hawk.  If I'm wrong, please let me know.  But, I heard some loud, strange squawking noises I hadn't heard before, coming from the backyard.  And that's when I saw him.  He actually hung out for awhile so I was able to get some good shots of him.

And last, but not least, although they aren't really considered "wild", a stray cat decided to have three kitties on my front porch. 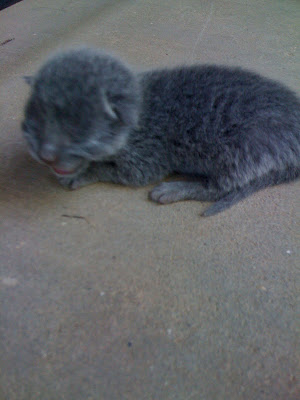 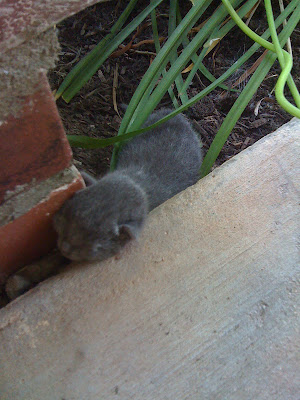 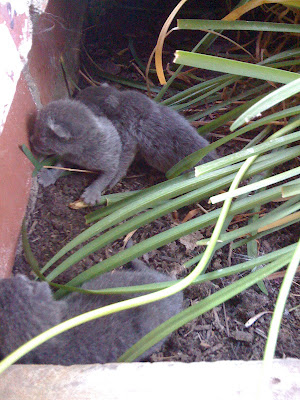 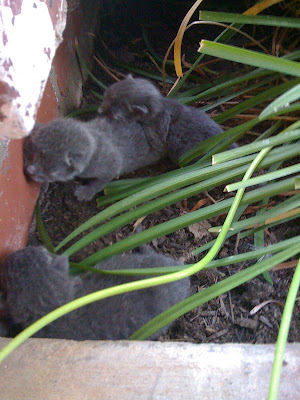 They make the funniest noises when they are that little.  I had never seen kittens that young before.  They were gone by the end of the day, but one of them made an appearance in my backyard a few weeks later. 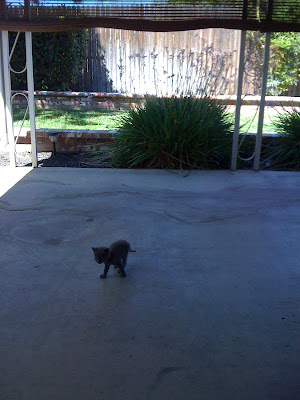 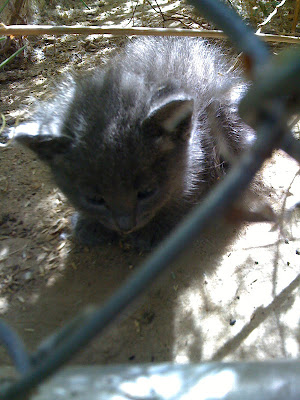 He got left behind - poor little guy.  :(  I'm not a cat person at all, but how I could I resist this face?  And here he is today.   He may not be wild, but he sure can be a punk sometimes. 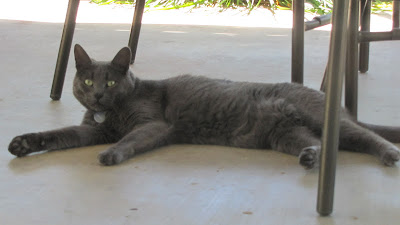 Posted by Chrissy @ Adventures in DIY at 4:47 PM