I don't have anything too terribly exciting to post about right now.  This past weekend was a bust - I think I got food poisoning.  I was so sick and spent the entire weekend recovering.  I did attempt another crafty project prior to getting sick, but it was a big fail.  We all have projects like that, right?  Not everything goes according to plan - such is life.  So, I'm sharing it with you today - maybe I'll save you some time or maybe you'll have some suggestions for me.


Here's a little background on it first.  I found my ex-stepsister (I really hate that term, but I'm being technical here) on Facebook earlier this year.  She is 6 months younger than me and at the time we were very, very close.  I think the last time I saw her was in my mid-teens?  It's been soooooo long.  I have so many great memories of the times we spent - crushes on boys, summers at the beach, stopping at little shops on our walks to the beach.  So fun!  So, we have reconnected and discovered that we still have a lot in common including we both love to craft and DIY.  We also discovered that we have pinned a lot of the same stuff on Pinterest.  Now, she lives in Arizona and I'm in California.  We decided that we would start doing some of these pins together - it's a way for us to craft together while being so far away from each other and also a way for us to actually get some of these pins accomplished.  Good idea, right?  :)

The first project we picked was to do a bath mat.
Or a t-shirt rug like this.

I decided to use the technique from the t-shirt rug, but use towels instead.  So, I got an old towel that I would use as the base of the rug.  Then, you will cut another towel into little strips and tie the strips into holes in the base of the rug and you will get the cute fluffiness as seen in the two pictures above.  Sounds easy, right?  Heh.

So, I cut the towel to the size I wanted and was going to cut little holes all over so I could tie the towel strips into the holes. 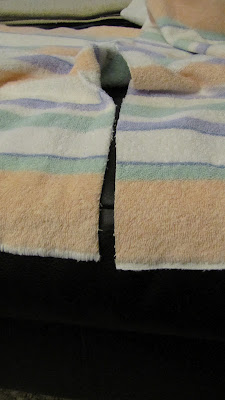 I didn't take a picture of it, but you should have seen all the little fuzzies all over the place after I cut it.  I was expecting a bit of a mess, but wow were their fuzzies everywhere.  Looked like snow (ok, ok, that was an exaggeration, but still!).  So, I decided to hem up the side I cut and that should do the trick, right?  Heh, heh - silly girl.  After hemming it, I shook it many times to get the fuzzies out, but they never really went away. 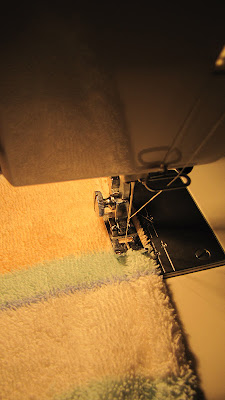 But then I realized since I would have to cut all the holes into the base of the towel, that there would be no way for me to hem them and there would be fuzzies all the time.  And when I cut the towels into litle strips?  Even more fuzzies!  And I can only imagine how many there would be after washing it all the time too.  So, I decided to save myself some time and I quit right there.  I didn't even get to start snipping little holes in the base - I didn't want to waste my time.

I think my stepsister is going to use t-shirts instead of towels.  She also found one of those grids, in the first picture, at the craft store and she's going to let me know how hers turns out.  Unfortunately, I don't have enough old t-shirts that I can use and I'm trying to be, ahem, thrifty right now.  I'm trying to think of another way to get this done using the resources I have - maybe I should use some of the leftover felt I have, but I'm not sure if I really want to use those colors.  Well, for now, I'm considering this a project fail, but if I figure it out, you'll definitely be seeing it on here.
Posted by Chrissy @ Adventures in DIY at 12:24 AM