I have seen lots of different gallery walls all over the internet and really like the way they look.  And I had a perfect spot to put one - my front hallway was a big blank slate to work with.  It took me awhile to figure out exactly what I wanted to do, but I decided on this and up it went a few months ago. 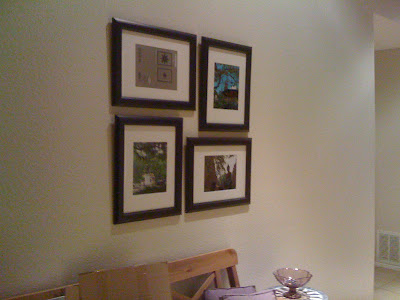 What I liked about this is that it's a streamlined look, but I could add to it on both sides if I wanted to.  But, then I found this blog post by Bon Temps Beignet.  She posted pictures of her new gallery wall and also included an inspiration photo from the Martha Stewart website.  I just love how it is streamlined (the separation of the top and bottom), but you can still randomly put frames above or below that middle "line" and it still looks organized.  I decided that this is the type of gallery wall I wanted to do and I also wanted to add other items, not just frames, to the wall.  So, I went to Ikea and bought more frames and they sat there on the table.  And sat.  And sat.  But, about a week ago, I found something at Joann that I thought be a perfect addition to my gallery wall and that was all the motivation I needed to get it done and get those frames off the table!

My dad bought me a laser level awhile ago (thanks, dad!), which I knew would come in handy for this project and it sure did.  So, before I took the pictures down, I set up the level, so I would have an idea of where I wanted the line to be. 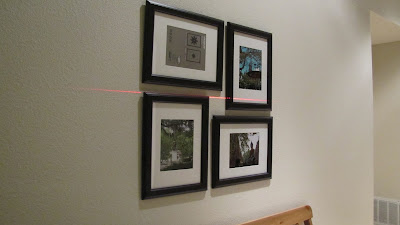 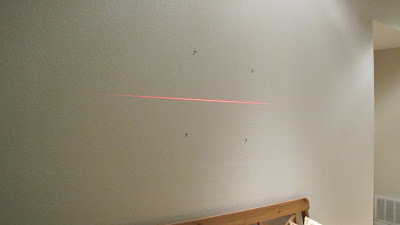 (The reason the laser line doesn't go all the way across the wall is because I set up the level in the closet that is opposite the wall, so the laser line could only show so far out of the closet).  I measured the wall and found the center so I would have an idea of where to start, but it didn't have to be perfect - I didn't want for it to be. 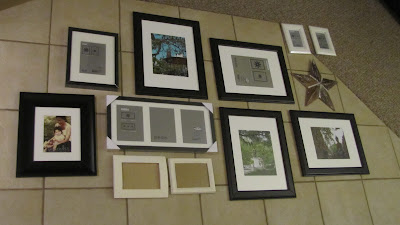 Before I actually hung everything up on the wall, I decided to lay them out on the floor to get an idea of hot they looked.  This was essential so I could re-arrange them until I found a way that I liked without putting lots of holes in the wall. 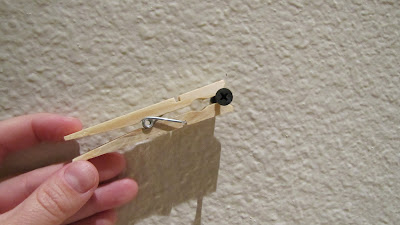 When I previously hung those other pictures on the wall, nails and regular screws would just slide right in and didn't have a firm grip on the wall.  I remembered that I had some leftover drywall screws, so I decided to try those and they worked like a charm.  I also tried out this helpful little tip with the clothespin, which I found in the October 2011 issue of the magazine "Cottages & Bungalows".  How clever! 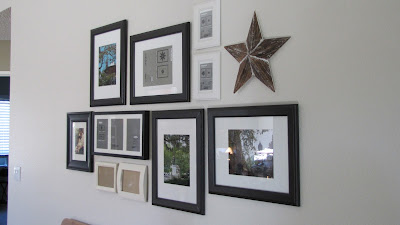 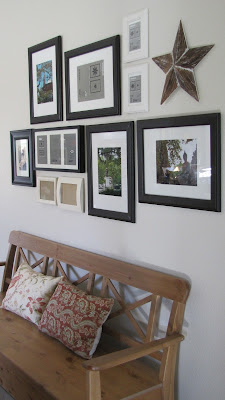 Here is how it turned out...this is the view from the front door/kitchen. 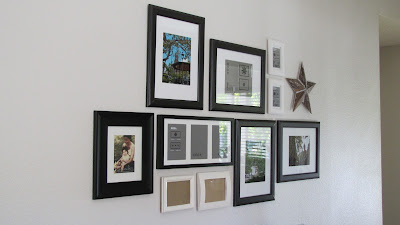 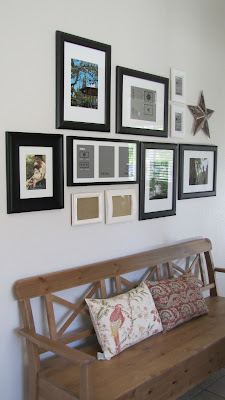 And this is the view from the living room.  On the left side above that frame on the bottom, I have one of the smaller frames that will go above it, but I didn't want to put it up yet.  I am planning on putting a monogram letter there also, but don't have it yet, so I once I get it and diy the letter, then I will get both of them up.  (See the bench below?  That will be getting a bit of a makeover - hopefully soon).

I like that I can add to it later - on the top, bottom, or the sides.  Now I just have to find and order more pictures to go in the frames, but the hard part is now done.  I just love how it turned out!
Posted by Chrissy @ Adventures in DIY at 12:31 PM

Email ThisBlogThis!Share to TwitterShare to FacebookShare to Pinterest
Labels: Decor