What a crazy day it has been today.  We've been having some major heat the past few weeks, but today it rained all morning and part of the early afternoon.  For the most part, it made the weather really nice & cool, but when the sun would peek through, it was warm & humid.  Also, for some reason, I couldn't fall asleep last night.  I didn't fall asleep until 7am and made myself wake up at 10am so my sleep schedule wouldn't get out of whack since I have to go back to work tomorrow.  So, it's been a crazy, weird day for me.

Last weekend I worked on my bookcase project.  I have an Ikea Billy Bookcase in black-brown and all the items on the shelves just kind of disappear into its darkness.  For a long time, I've seen in different magazines & blogs that you can put wallpaper, fabric, or even wrapping paper on the backing to give it contrast.  I have really liked the idea of doing this, but have always hesitated because: #1)  it would be a pain to take everything off the shelves, unscrew the bookcase from the wall, and then move it and take the backing off and #2)  I didn't want to ruin the backing in case I want to change it back.  But, I got really inspired recently when I saw Thrifty Decor Chick's post about how she redid her dining hutch.  She used foam poster board and wall paper and cut pieces to fill in the spots of the backing of her hutch!  I thought this would be so much easier and could do one shelf at a time - I didn't even have to take everything off the shelves.  I ended up using 3 foam poster boards and 2 rolls of shelf liner from the Dollar Tree for a total of $5!  Three of the shelves don't have boards that fill up the entire shelf space, but you can't tell because my books cover them up.   I forgot to take a "before" picture because I was excited to get started on it, so here is an old picture.  Just ignore my patio table set and all the messes.
I plan on re-arranging the items on the bookshelf.  I'll be taking some of it off and adding more decor, but this will do for now.  I'm still trying to get used to backing, but it sure does lighten up the space.

I have also seen all the pretty coral products that Pottery Barn has.  They're a bit pricey for me, but then I found Home Stories A 2 Z post about how to make your own coral for cheap.  She found some coral at Walmart and just spray painted them white.  Um, brilliant!  They didn't have a very good selection at my Walmart, so I picked just one piece for $8 and got some spray paint.  Again, I forgot take a "before" picture (what a slacker), but here is the outcome. 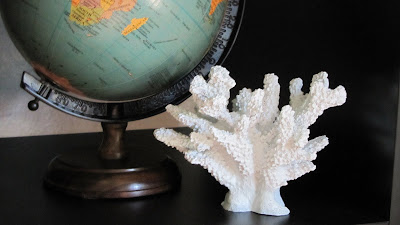 Boy was it hard to spray in all those nooks & crannies!

I also made these today: 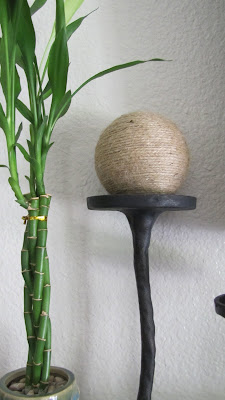 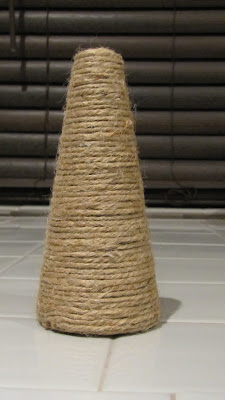 I have seen these (ahem) textured balls in magazines and many blogs and really like the look.  I want to make at least 2 more using different textures and put them in a bowl or jar of some sort, but just looking for what other materials to use on them.  I was going to use some leftover yarn that I had, but the colors I wanted to use, I'm already using for another project.  The cone shaped one on the right I just saw the other day on a blog.  I'm pretty sure I saw it on The Lettered Cottage site, but can't find the exact post.  I'm going to use this at Christmas, but figured I would just make it now since I already had all the supplies out.  Here is a before of the ball: 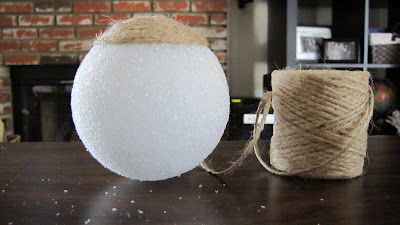 All it took was a ball-shaped foam form, jute, and a hot glue gun.  It was really easy to make - I did this in between spray painting, laundry, and watching tv.  :)

I also spray painted a couple of picture frames that I hadn't used in awhile because they didn't really go with my decor.  I sanded the frames up a bit and primed the one of the left.  I used Rustoleum's Heirloom White.  Once they dried, I distressed them (I hadn't decided if I was going to do that or not, but I didn't do a good job at spraying the one on the left) using the sand paper.
They would look perfect in my Ikea Expedit shelf in the living room, but there's no room right now.  I might have to replace the 2 other picture frames I have in there right now, but they are covering my modem and router so these 2 will have to be able to do the same thing.

During my trip to Walmart yesterday, I also bought more poly fiber fill.  I'm planning on making some pillows that I'm very excited about.   And since I got that, I decided to stuff my current decorative pillows on my couch.  I had bought decorative pillow covers at Bed, Bath & Beyond quite awhile ago and put some cheap pillows that I already had inside them.  Well, they never properly fit, so I sort of didn't like them.  Well, after I got home from Walmart yesterday, that was the first thing I did.  I took those puppies out and stuffed them with the fiber fill and I am so happy with them now!  They look a lot better and feel better. 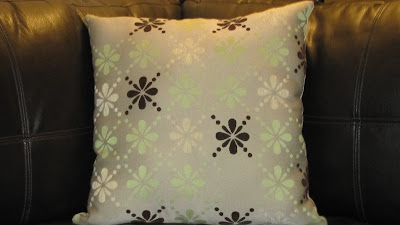 This isn't a very good picture since I took it at night, but before the corners were kind of floppy and now it's filled in very nicely.  Me likey!

So, I feel accomplished this weekend.  I wanted to get some other projects done, but wasn't really in the mood for "house" stuff.  I was more in the mood to be crafty.  Hope you had a good weekend!