I previously shared how I covered the cracks & finally painted the master closet header.  It was just a quick fix so I could finally get it painted & wasn't done correctly.  I finally took the time to fix it properly. 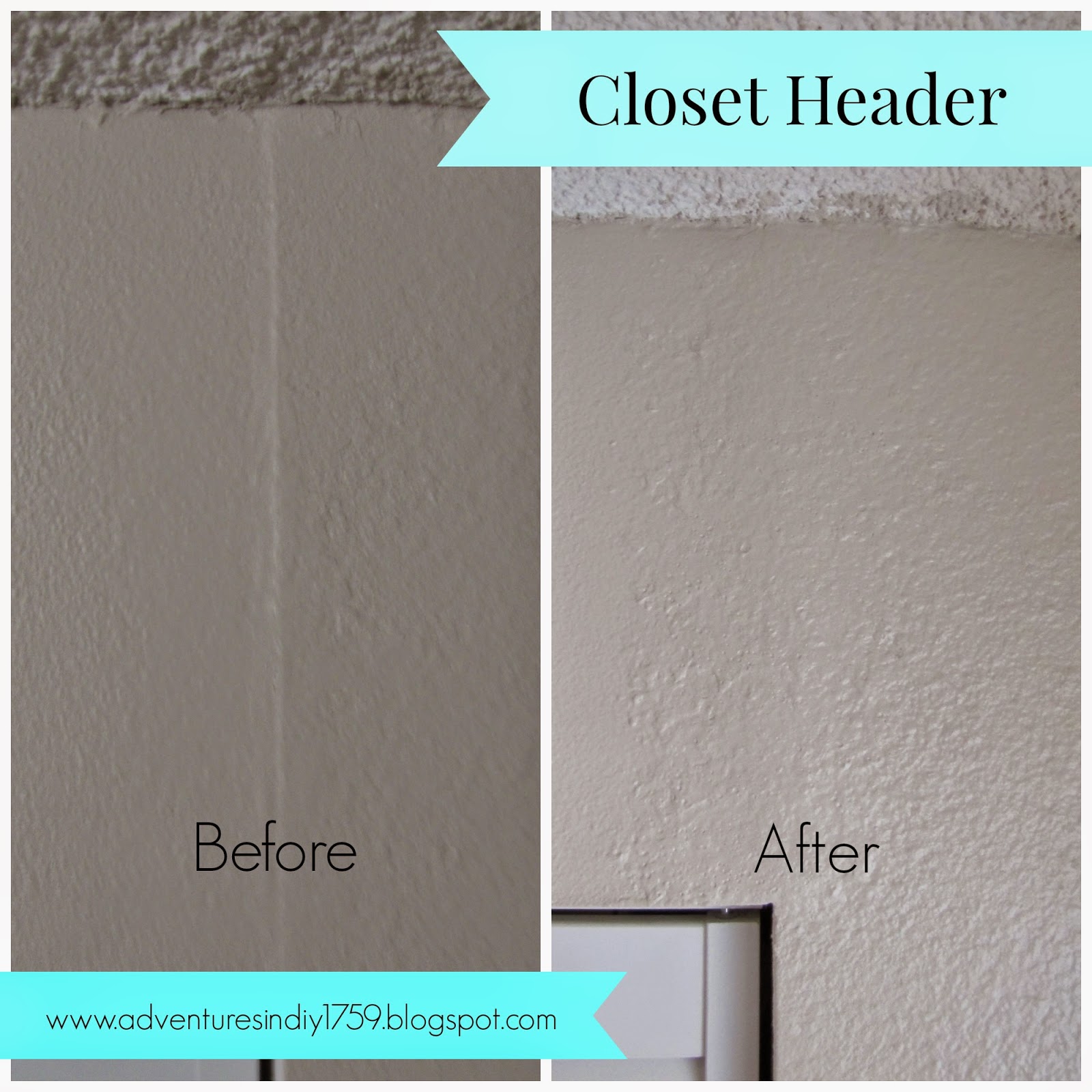 As you can see in the below (nighttime) photo, you could see lines (bumps) on the closet header on both the left & right going from the top of the closet to the ceiling.  That's because of my horrible patch job. 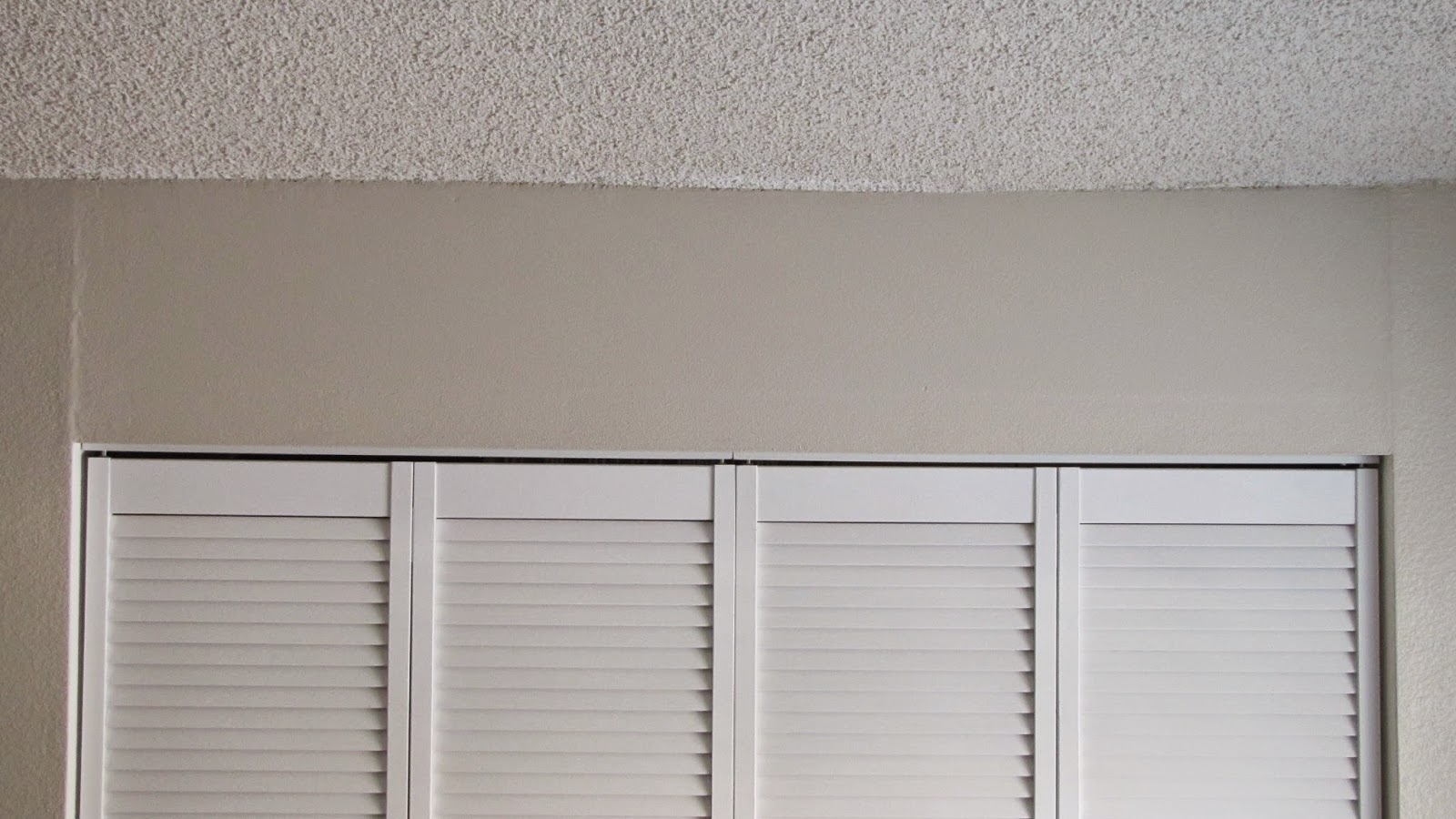 At first, it didn't really bother me - because the lighting in my house is kind of bad, most of the time the lines weren't too noticeable.  But after awhile,  it bothered me enough that I decided I would fix it.  Here are some close up shots so you can see just how bumpy the lines were - they looked like bad scars (the left one was worse than the right). 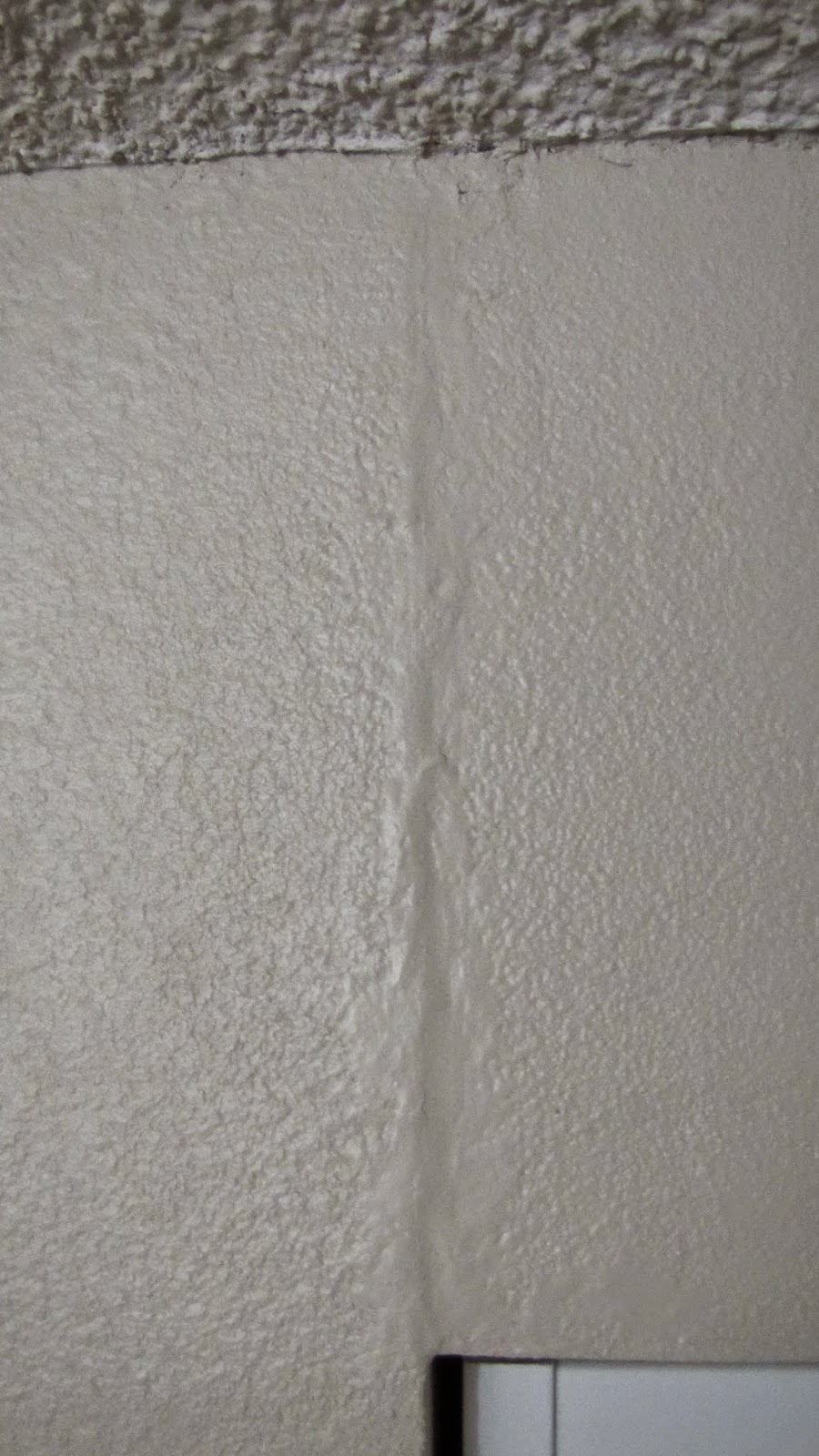 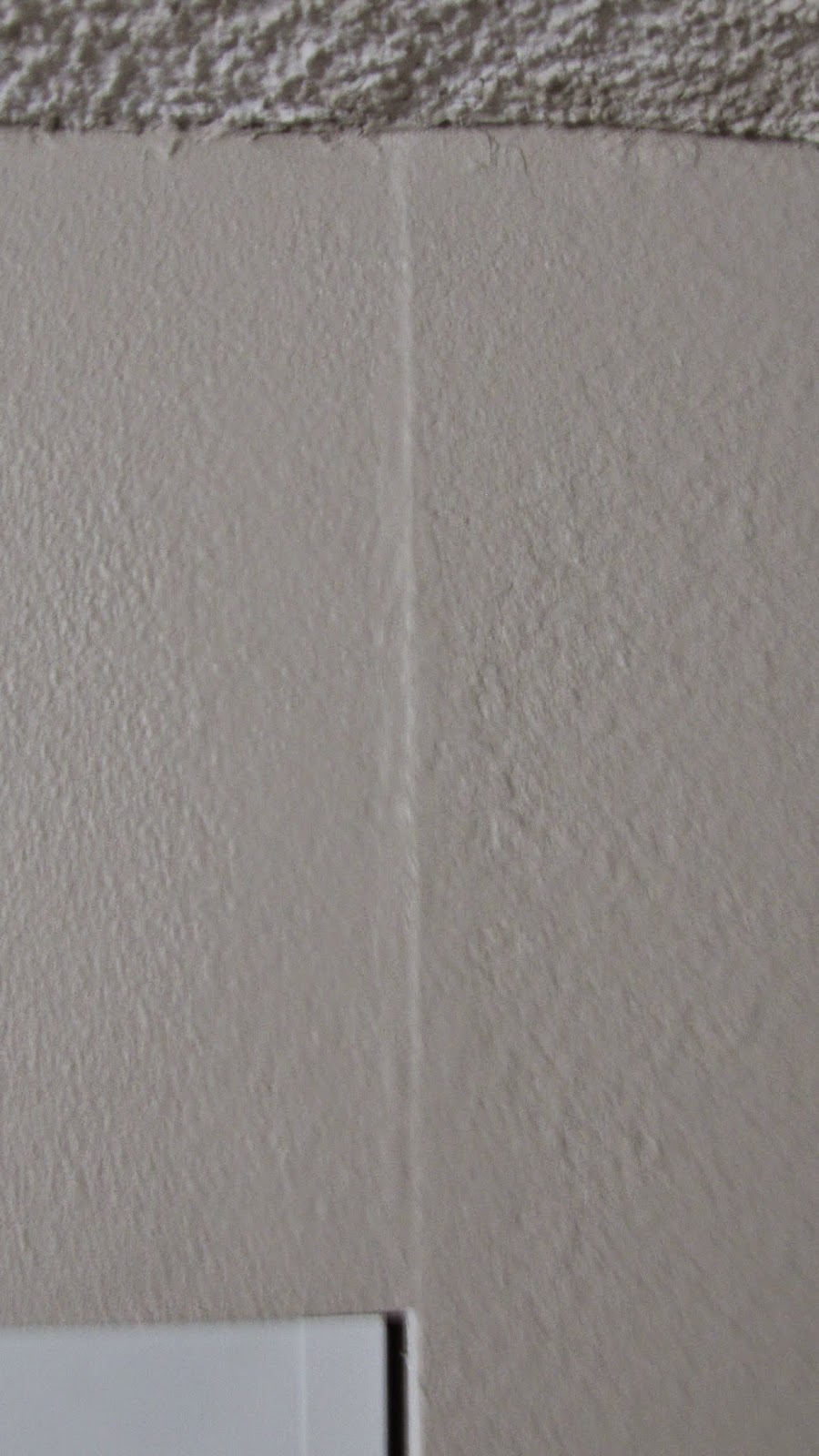 Mind you, I'm definitely no pro, but I can get by.  I used this tutorial from from House of Smiths, so I won't go into detail on what I did, but I'll give a play-by-play of how I fixed it.

Since this is a messy project, I taped plastic drop cloth below the areas that needed work (I have louvred closet doors & the last thing I need is for a bunch of drywall dust all over my clothes).  I didn't worry about covering my floor since it could be easily vacuumed.  So, first thing was to sand down both bumpy areas until they were level with the walls & there was no more bump.  All of that sanding sure did make a mess! 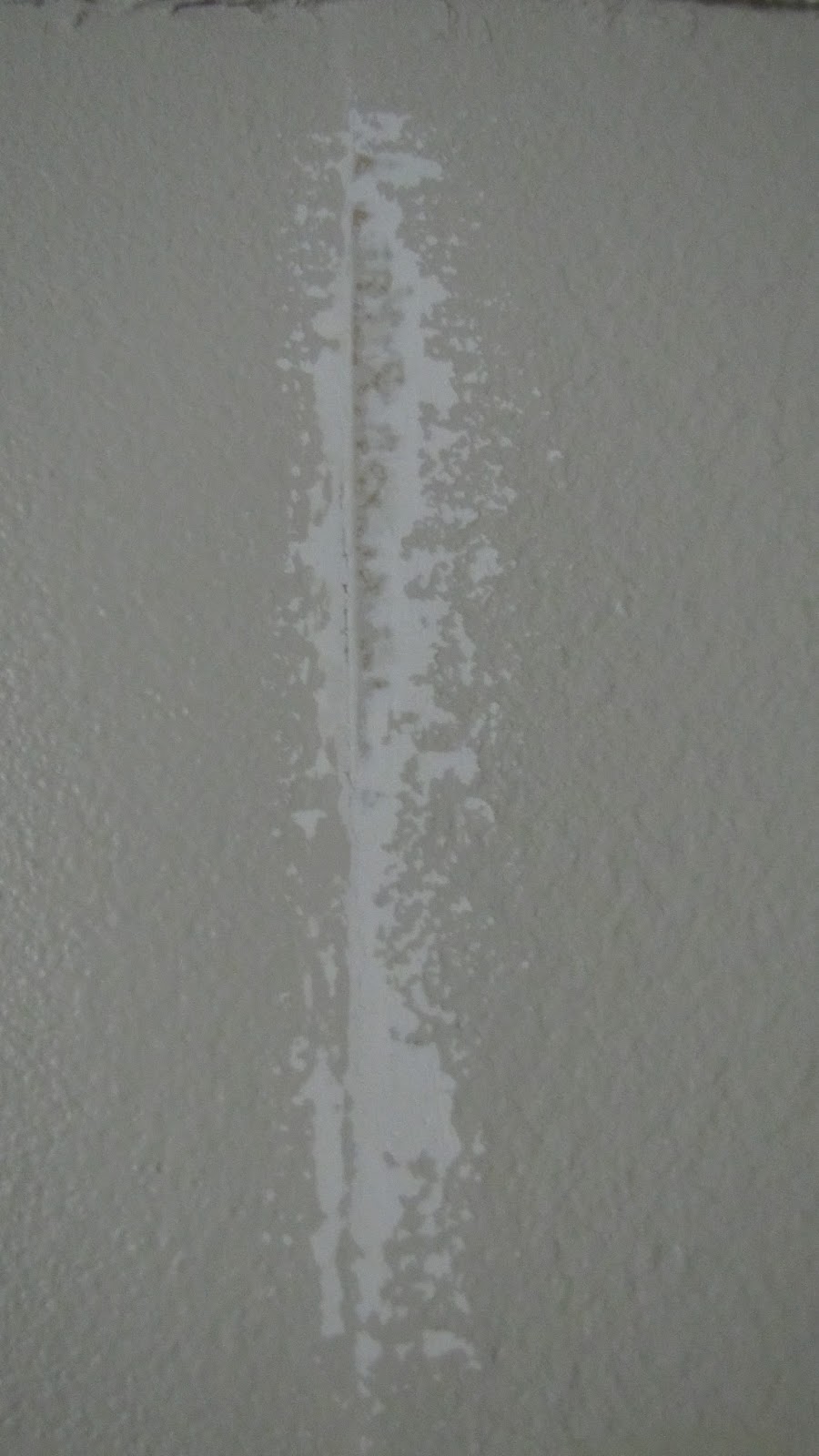 I then applied lightweight joint compound directly to the wall & then put a length of drywall tape on top (sorry for the horribly, blurry photo).  Using my putty knife, I smoothed out the tape - this helps to squeeze out any excess joint compound & makes the tape stick to the wall. 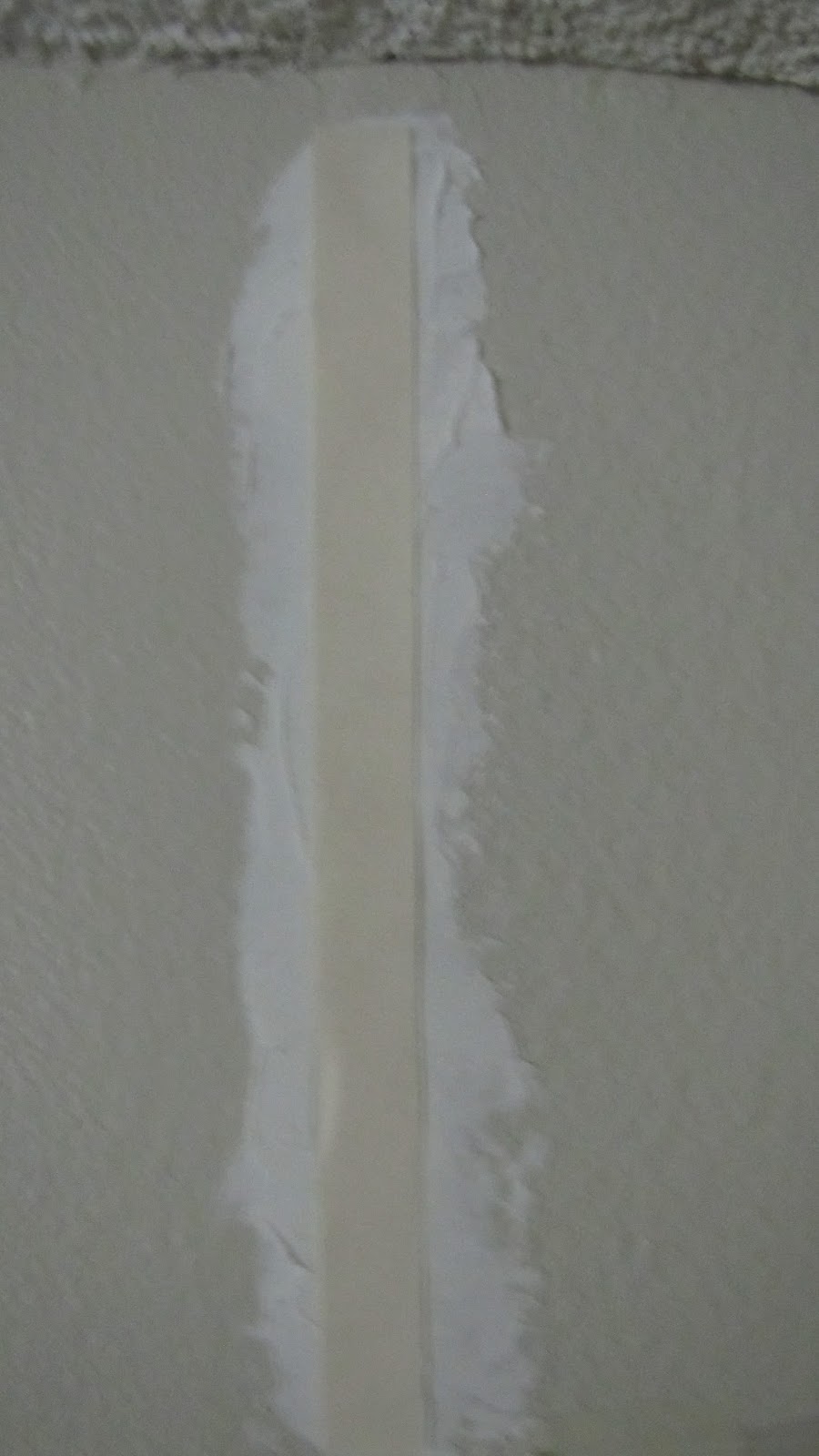 After that dried for awhile, I applied a layer of joint compound on top.  In theory, it's a good idea to fan out the joint compound further out from the tape than I did, but I decided to keep it to a small area to make it easier for me (since my walls are textured, I would also have to spray texture on the patched area, so in my mind - the smaller the area, the better). 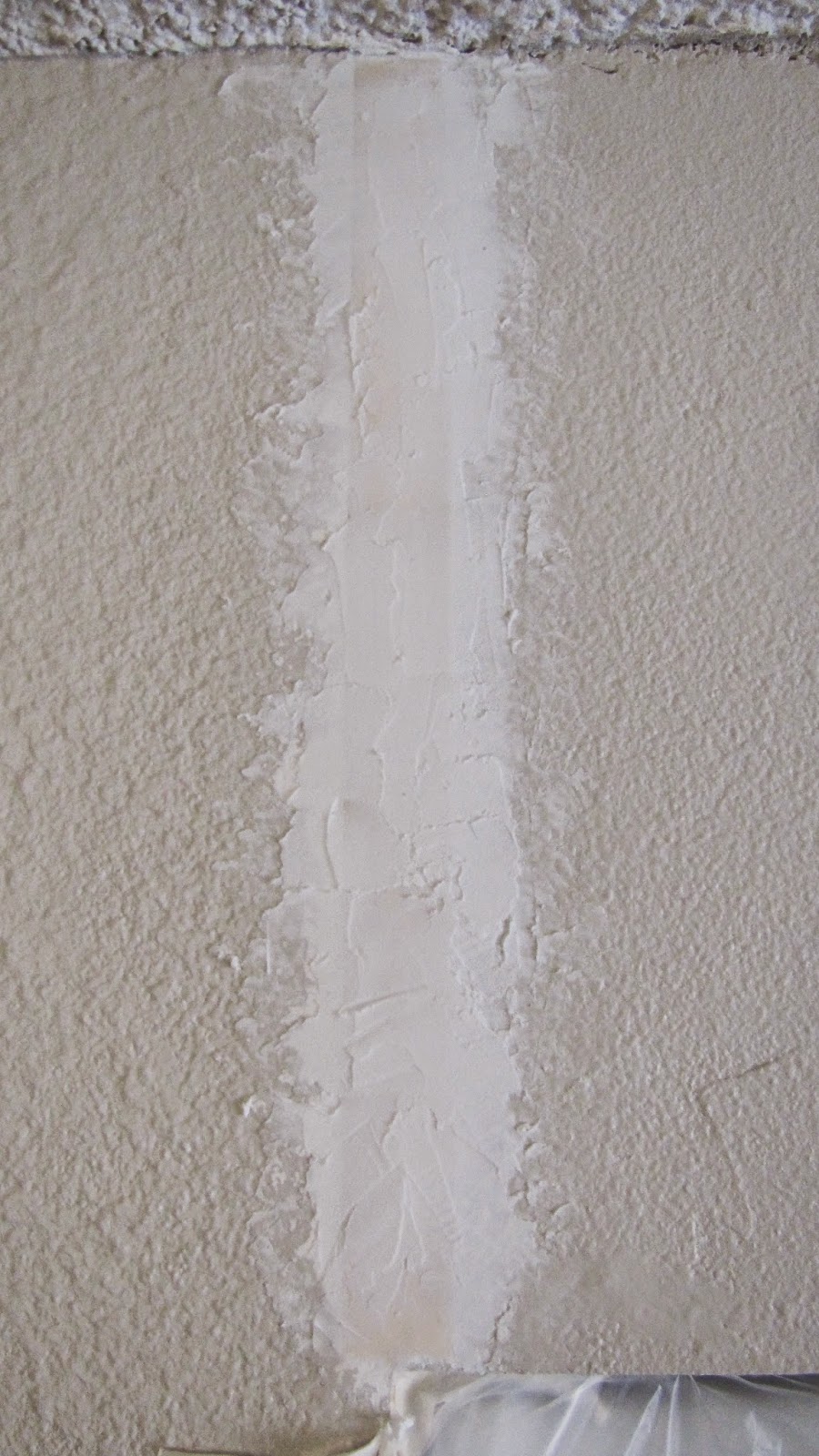 In between coats of joint compound, I used a fine grit sand paper to knock down any rough spots and then wiped down the area with a damp cloth.  (There were lots of rough spots because I was using a smaller putty knife than you would normally use since I was trying to keep the patched area small). 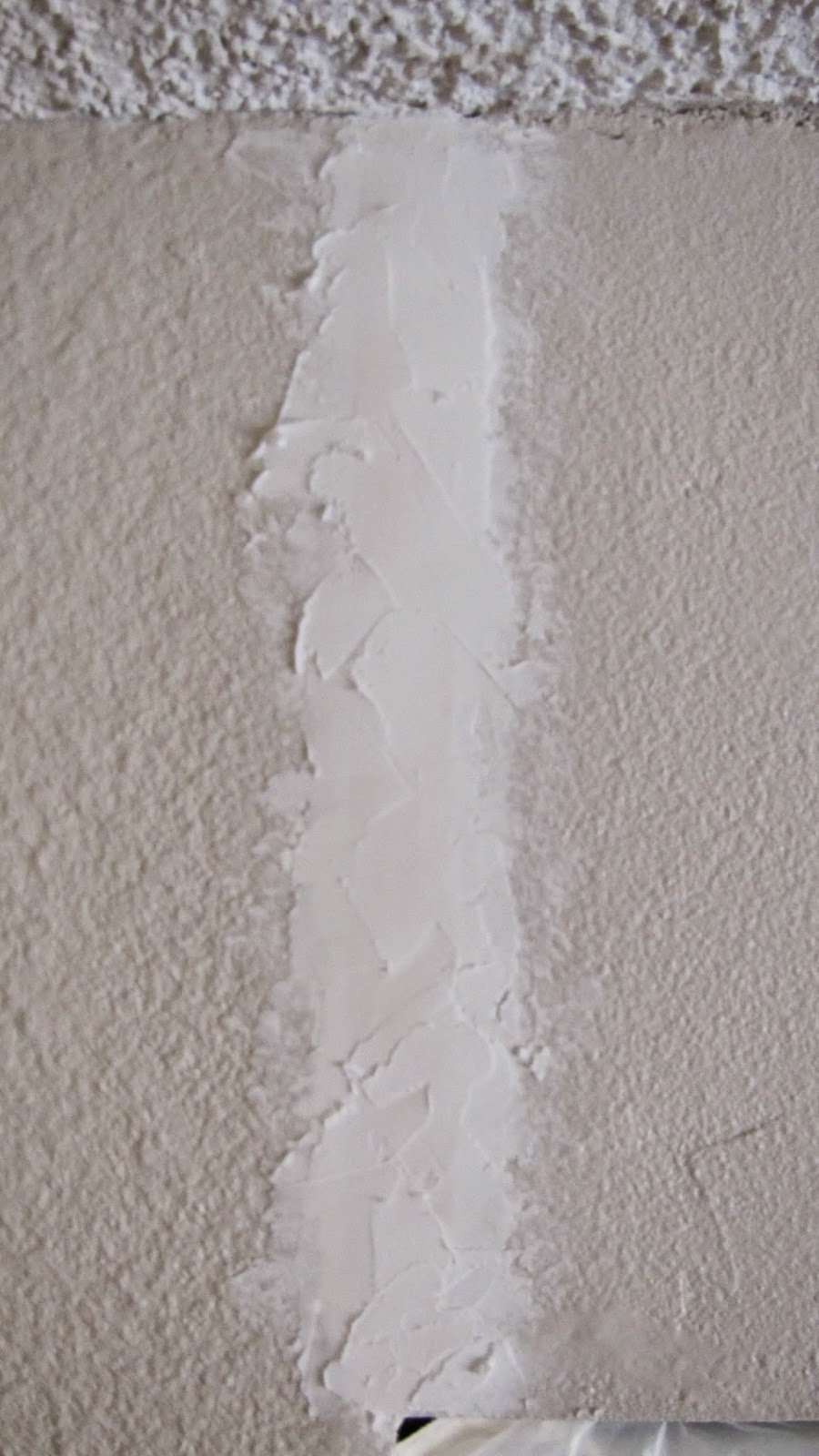 I think I did about 3-4 light coats in total.

After I felt like it was good enough, I used the spray texture to make the patched area blend with the walls.  It's the "orange peel" texture on the "medium" setting. 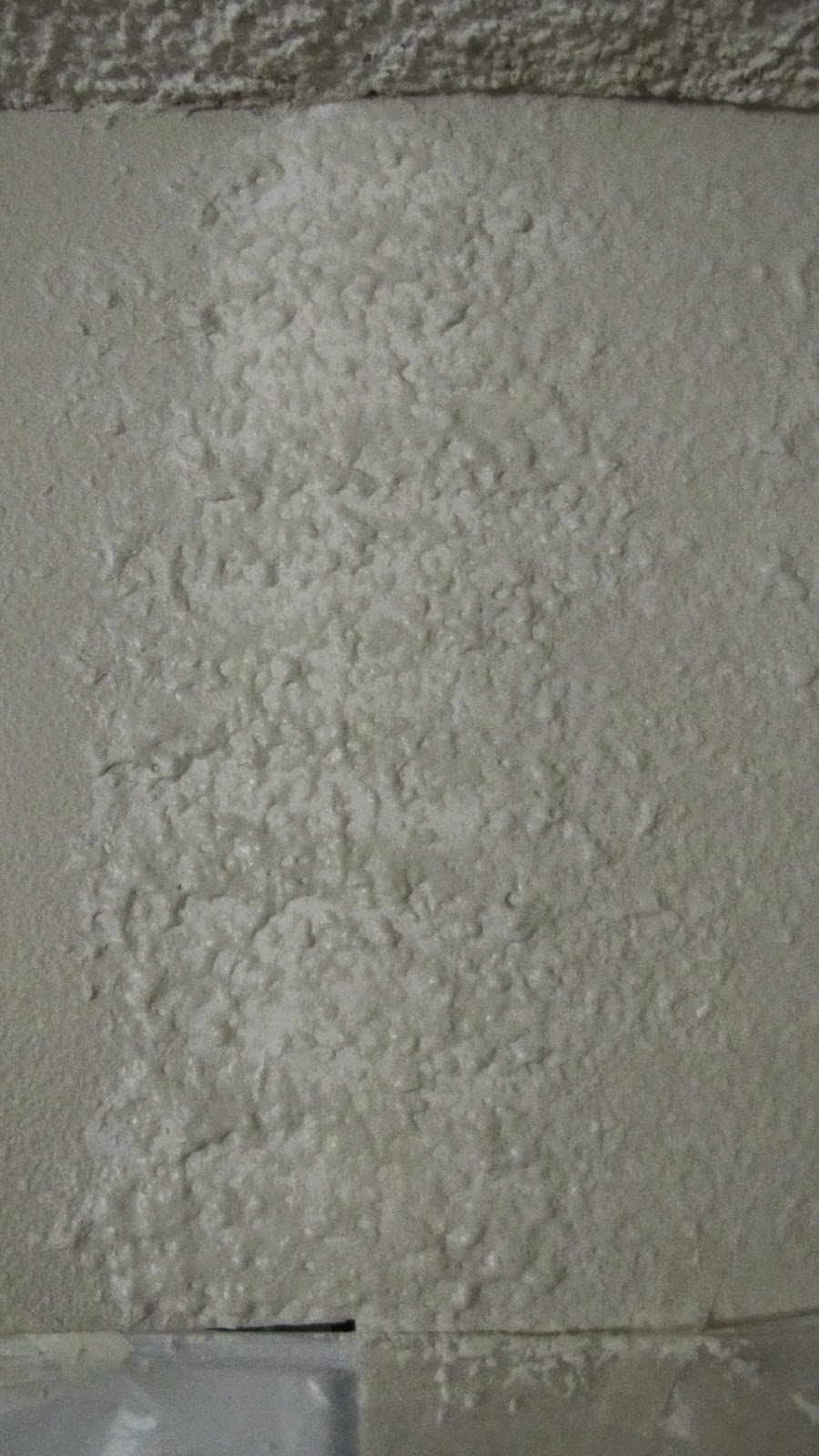 The can of texture said it would be ready to paint after 30 minutes, but that wasn't the case.  Once the texture was dry, it turned white.  But, because it was taking longer than the 30 minutes, I decided to just let it dry at least overnight.  Unfortunately, the person who did this originally used the smallest setting of texture on the actual header when the walls used the medium setting, so it doesn't match perfectly, but I didn't want to re-do the whole header - it doesn't bother me that much. 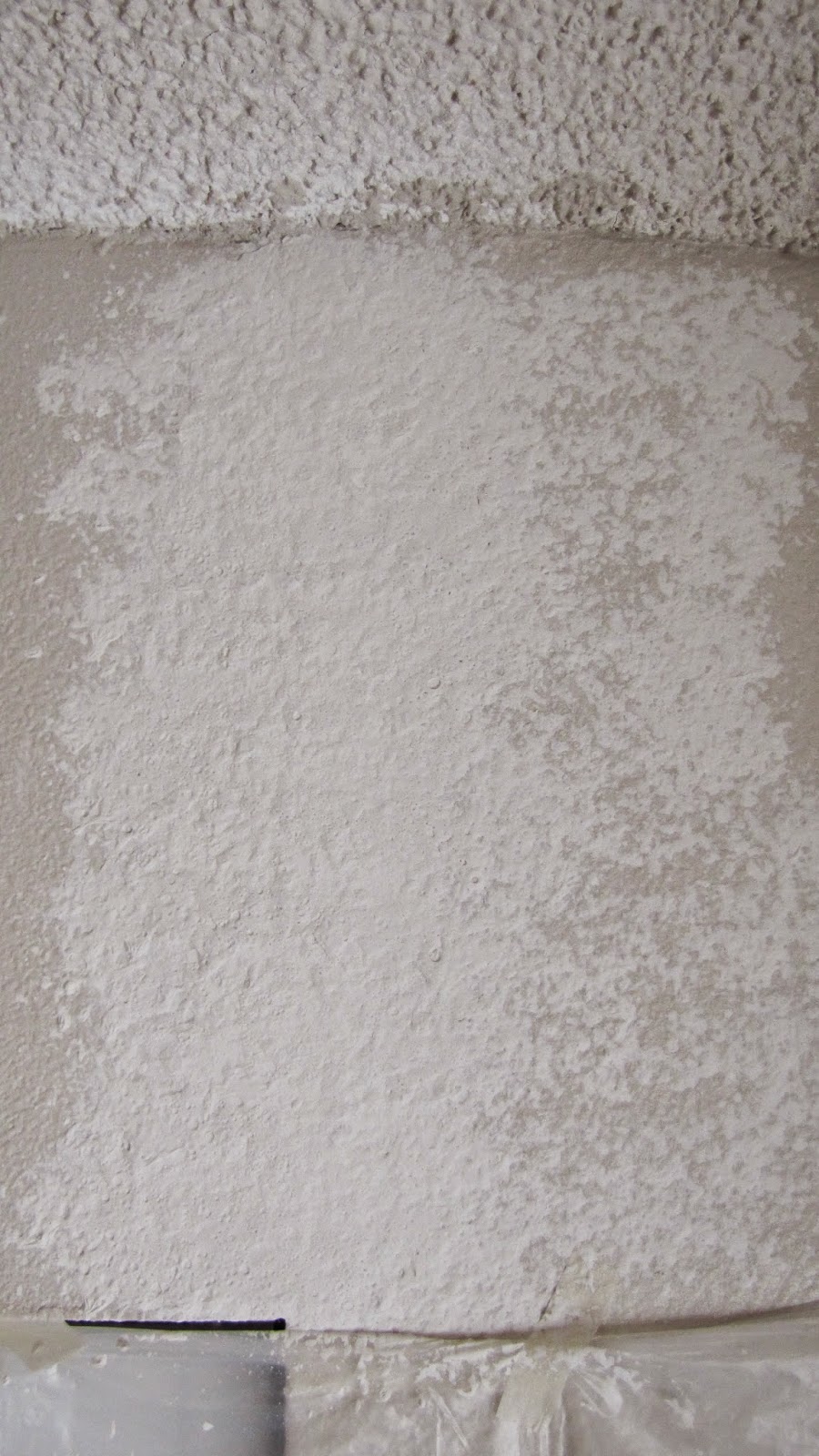 Then, I primed over the areas.  It only took 1 coat of primer. 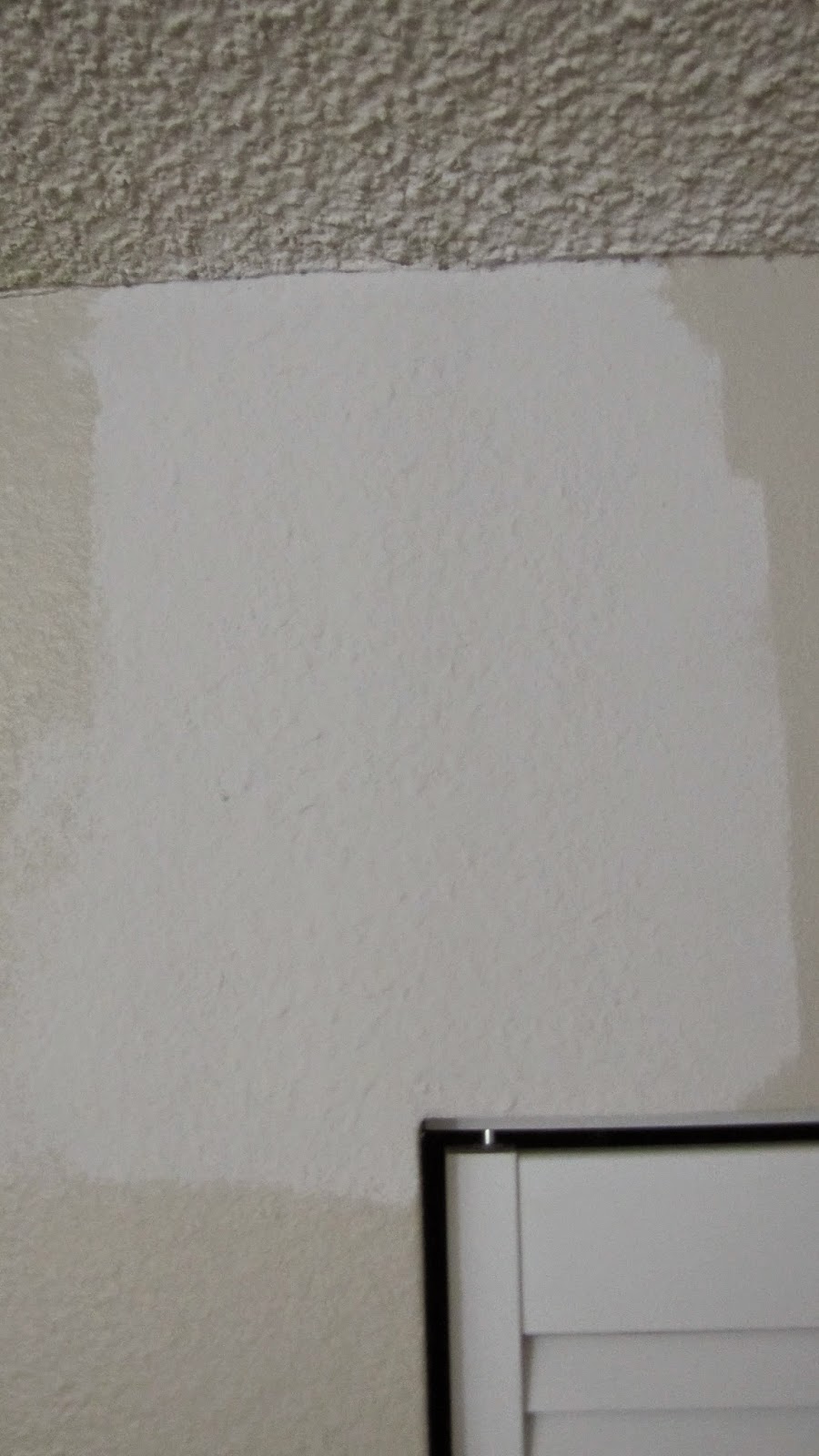 And lastly, I painted 1 coat of Behr's Sandstone Cove to match the rest of the wall. 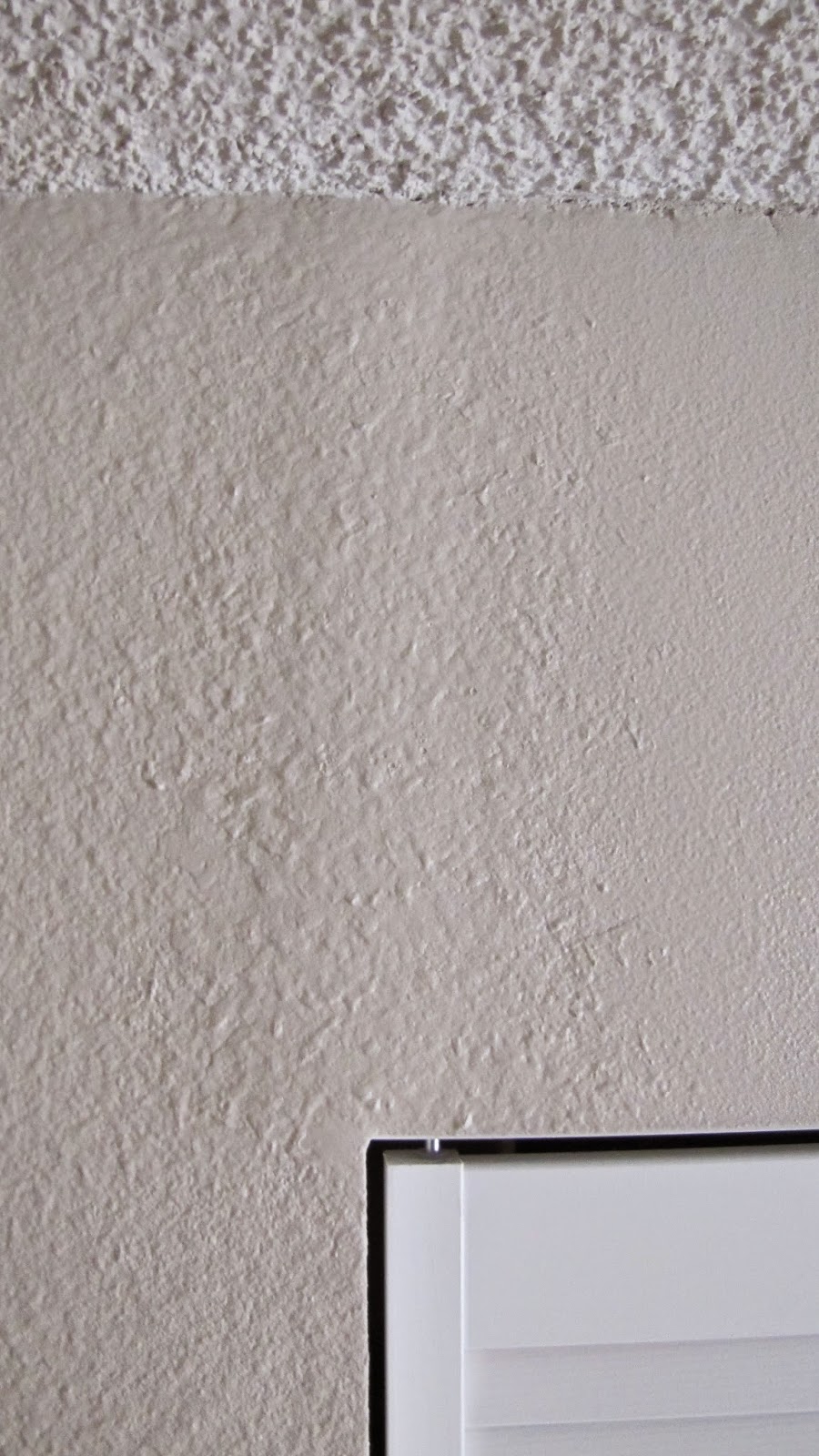 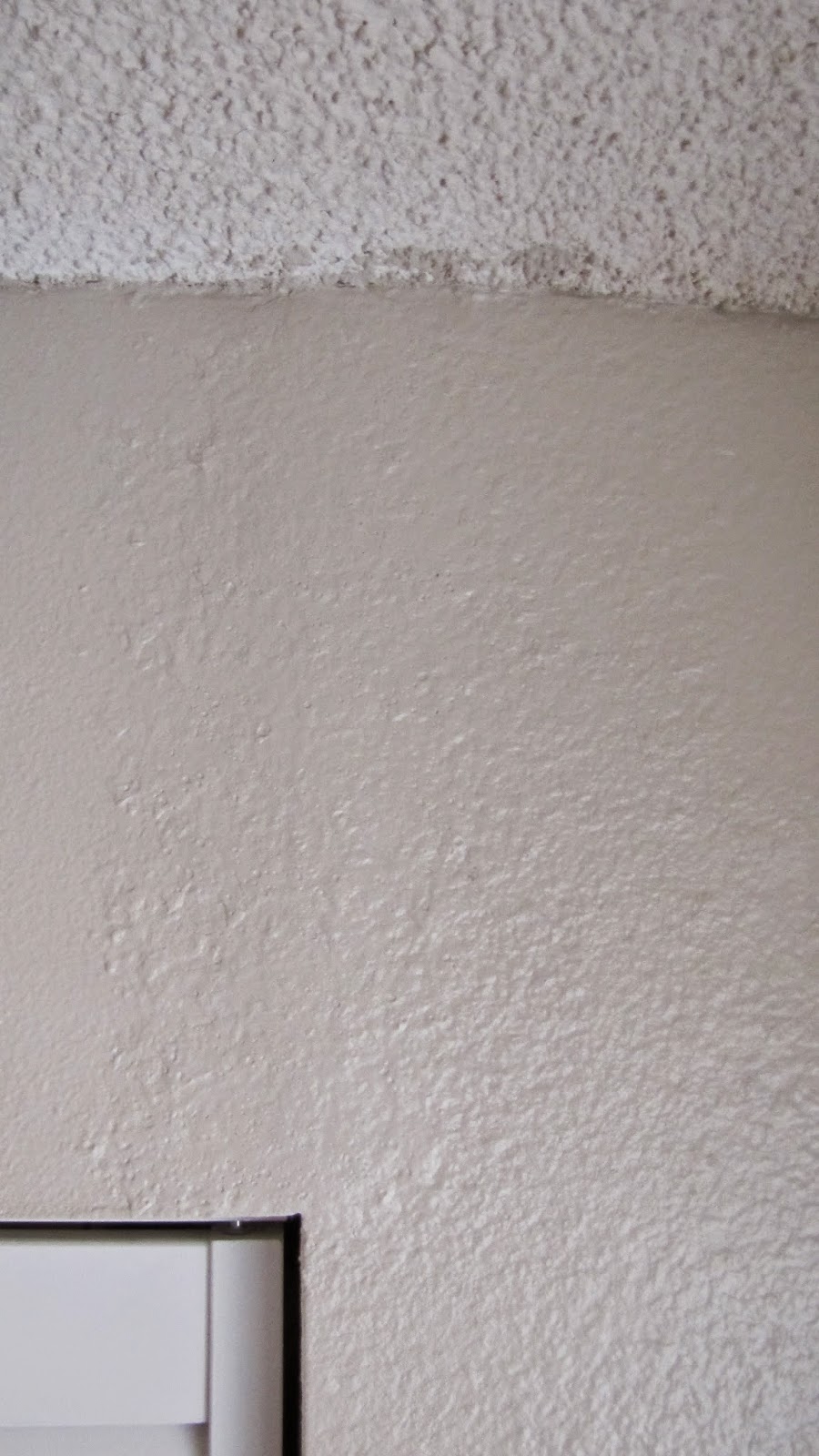 It's not perfect - you can still see the slight raised areas (it's more noticeable in the pictures than in person).  I'm thinking now if I had sprayed the entire header with texture, it would have blended better (hey, I'm still learning), but it's much, much better than before!  I rarely notice it anymore.  Not too shabby for a novice! 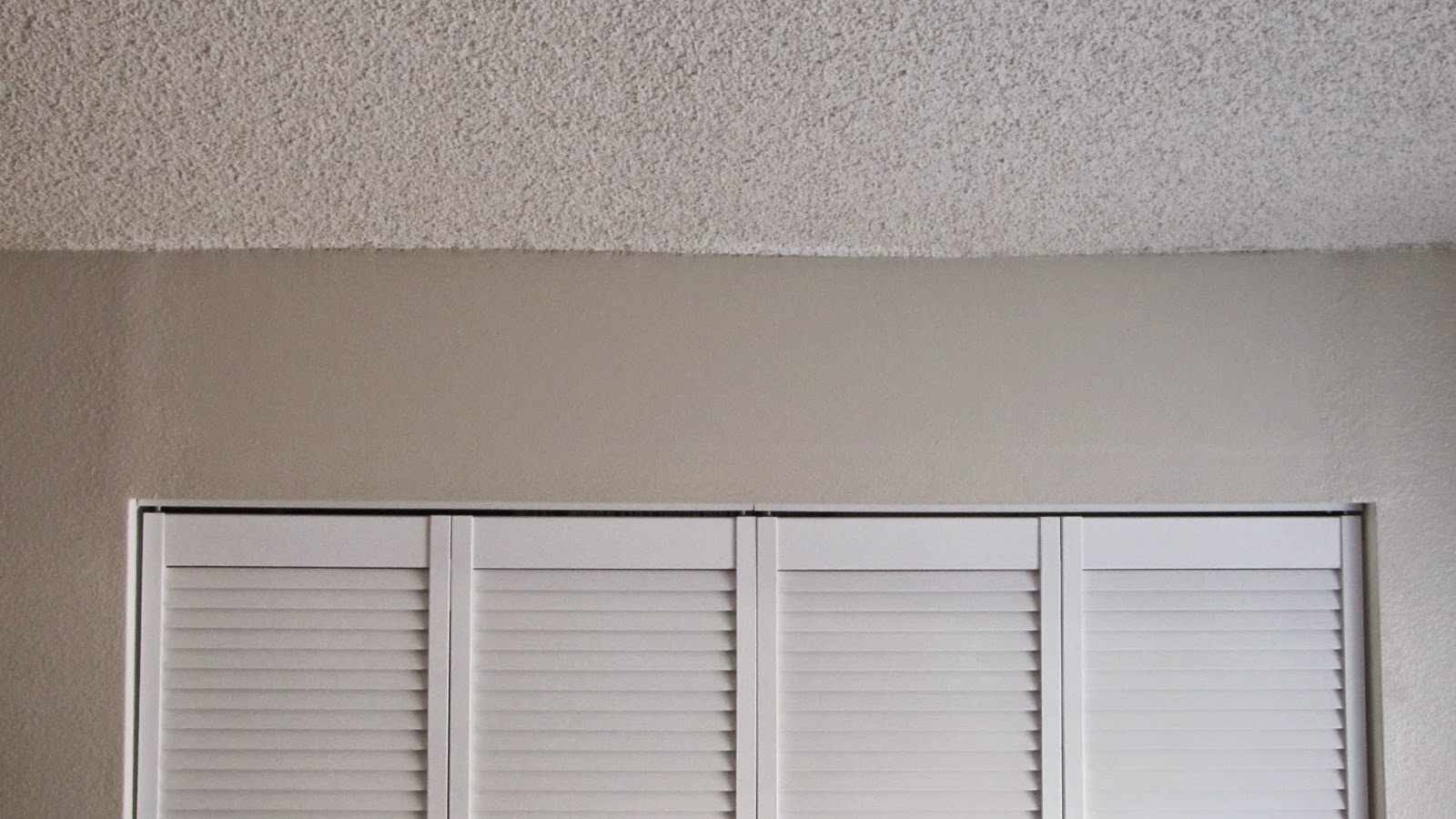