New Paint in the Hallway

I'm just going to say it, so you don't have to.  This isn't going to be the most interesting post by a long shot.  But, I finally painted my little hallway earlier this year, so figured I may as well share it. 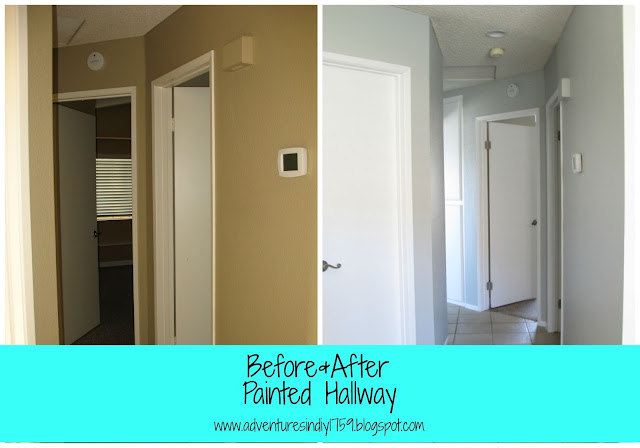 When I bought the house, the hallway & the bathroom attached to it were painted in what I think is Brown Teepee by Behr.  I don't have any issues with earth tones, but I prefer more cool tones and lighter colors.  This brown hallway is smack dab in the middle of the house that doesn't get a lot of natural light, so the dark color didn't do it any justice.  It always felt like a cave.

This is the view from the living room. 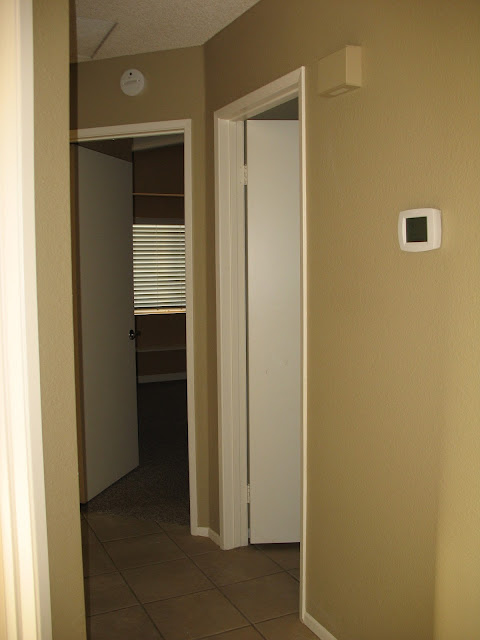 (By the way, I know I took recent pictures of the hallway before I painted it, but I can't find them anywhere).  And here's a view from the guest bedroom.  You can see how I tested out several paint colors in the hallway.  Those paint samples were up on the wall for about 2 years.  ;) 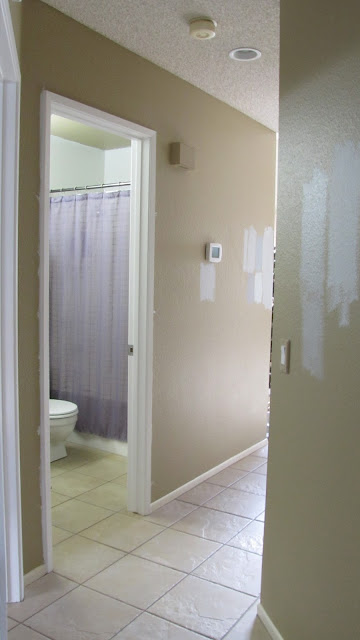 I had some leftover primer, so thought I would just use the rest of it to cover this dark color.  I chose the new paint color awhile back, but priming the hallway gave me a chance to think about it and make sure that color was what I really wanted. 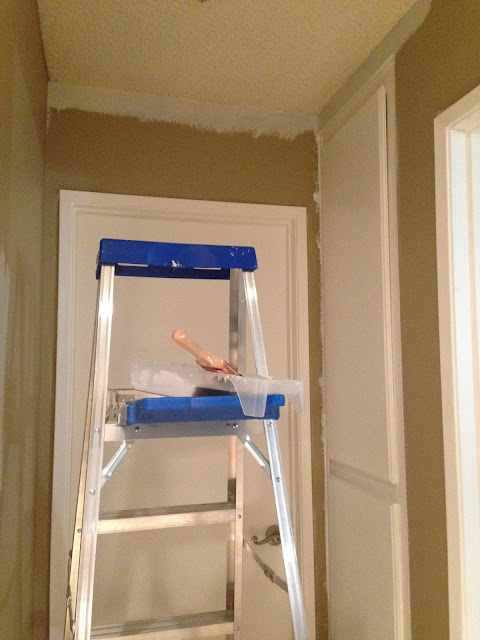 The new, lighter color of the primer solidified the fact that this hallway needed a light and not dark color.  I was already so much happier with the primer on.  And by the way, this hallway may be tiny, but it sure was a pain to paint.  This hallway includes 3 doors, 1 set of double-doors, a linen closet, the doorbell box, and thermostat screen.  That's a lot of cutting in and taping off! 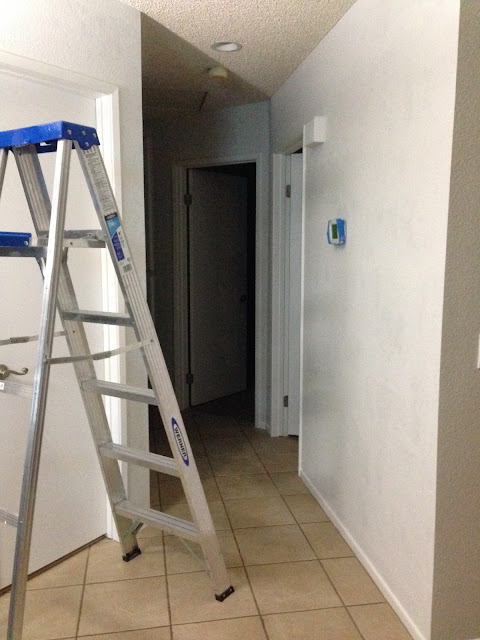 The color I chose was Dolphin Fin by Behr.  When I was at Home Depot getting the paint, I was browsing their paint swatches and was shocked to see that a lot of the paint colors have changed.  I asked the girl behind the paint counter and she said that they had just changed in the last few months.  Whaaaat?  I don't know if the actual colors have been updated also, but for sure the names have changed.  Sigh.

Anyways, so here you can see how much better the hallway looks in it's new color.  Such a huge difference and I just love it! 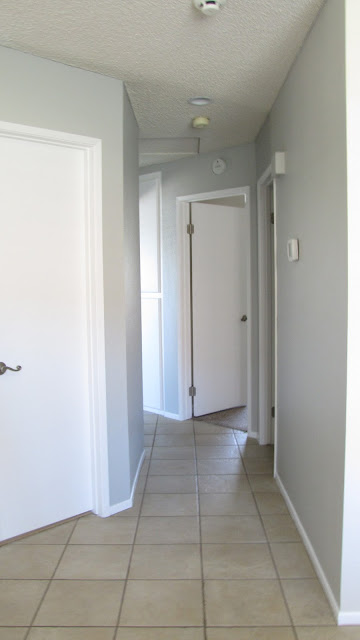 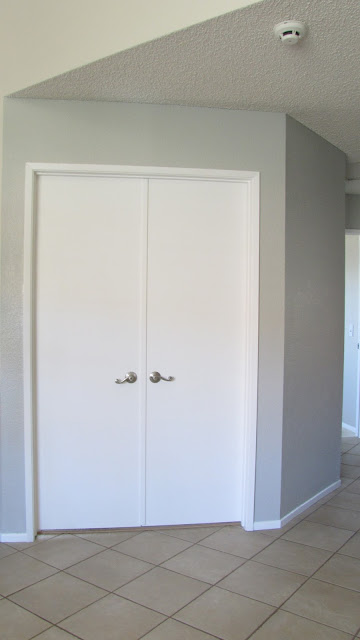 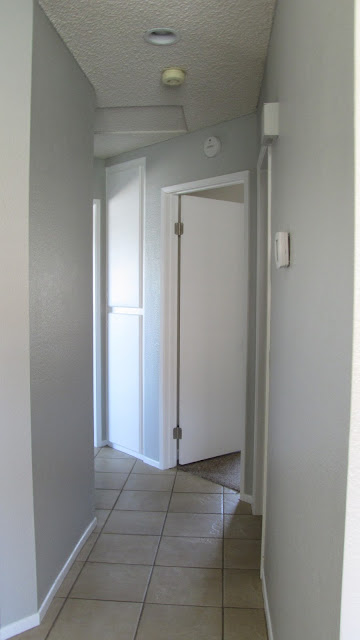 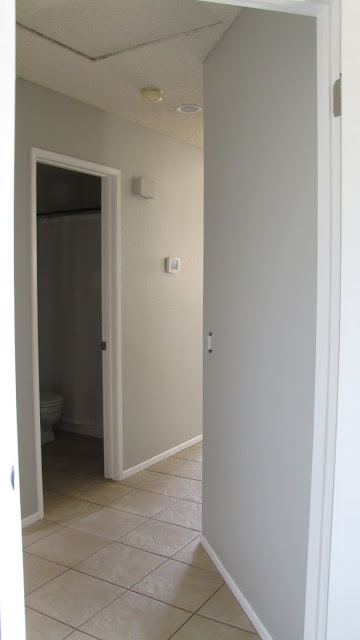 I previously only had one picture frame up on the wall, but I haven't put it back up because I'm thinking to do something different.  It's just hard to decorate because it's a small space filled with weird angles.
And now that the new paint color is up, I feel like the floor tile doesn't work with it (I want to eventually change the floors anyways) and you can really see how off-white the popcorn ceiling is.  I want to start taking down some of the popcorn soon and I'll probably start with this hallway first since it's a small area.  (See how one project can often lead to more projects?)  Anyhow, that's it - new paint in the hallway.  It's nothing terribly exciting, but I love how much of a difference paint can make!

Email ThisBlogThis!Share to TwitterShare to FacebookShare to Pinterest
Labels: Paint