It's been awhile since I've done a Disneyland post (looks like the last time was in June of last year, although I've been several times since then).  My birthday was last month and I wanted to go to Downtown Disney to celebrate.  I would have loved to go into the actual parks, but my annual pass was blocked because of Spring Break & Easter weekend.
We took the day off work and headed down there a bit early to beat traffic.  We started out with the afternoon showing of Johnny Depp's new movie "Transcendence".   He's my faaaaaavorite and this  movie opened on my birthday.  It was very nice of Johnny to do that for my special day.  ;)
Have you ever been inside the AMC theater at Downtown Disney?  I've been several times and have always loved its Art Deco style - especially in the ladies room... 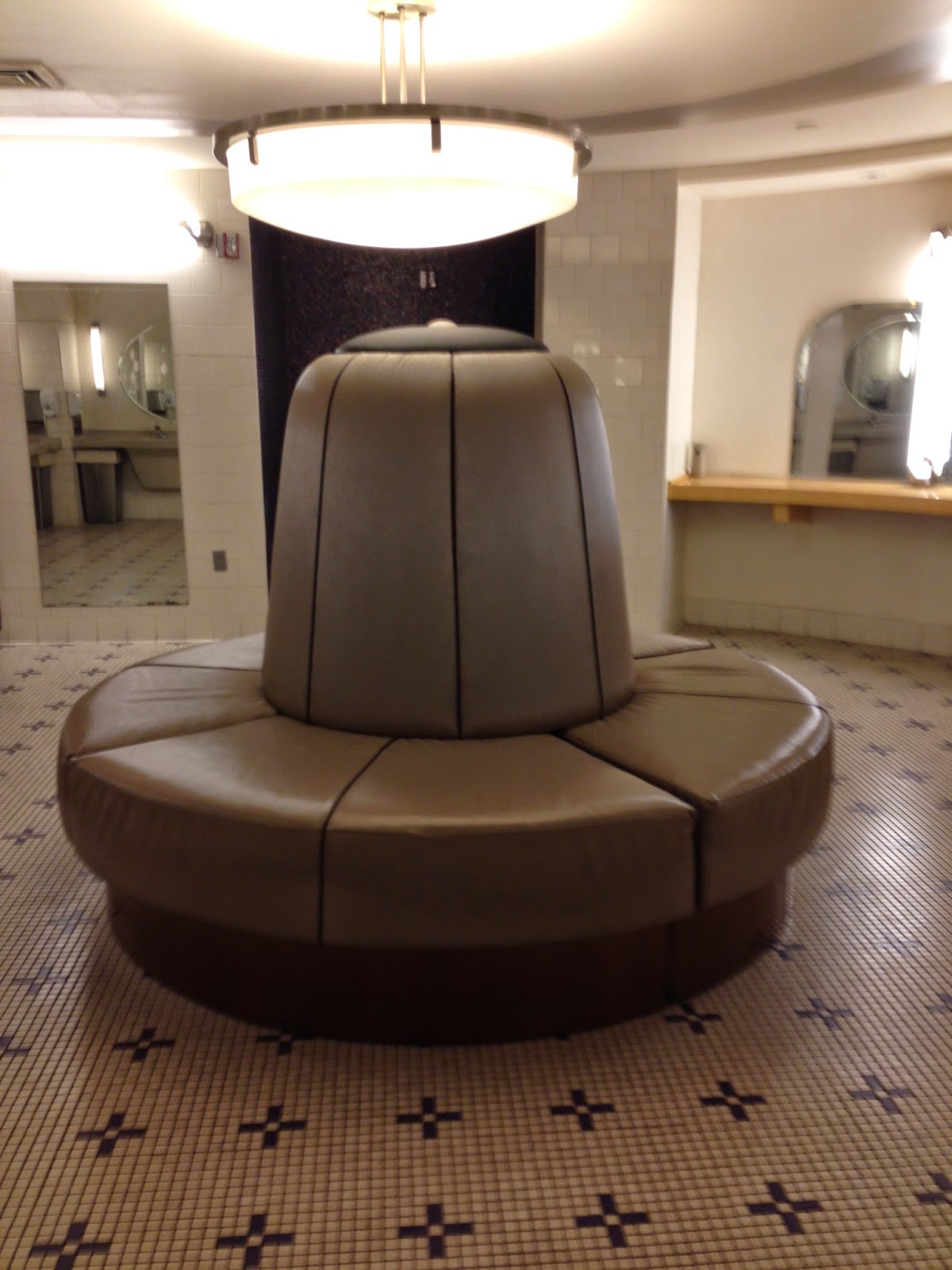 Yep - I did take a picture with my cel phone in the restroom (don't worry, no one else was in there).  But, that's way cool, right?
The movie was just "ok".  It wasn't the typical quirky, clever-type movie that Johnny Depp does, but it wasn't terrible.

We then headed over for dinner.  I originally wanted to eat at Napa Rose since I've heard such great things about it.  But after I looked at their menu, I changed my mind.  I'm pretty picky when it comes to food and don't need anything too fancy to please me.  Their menu looked pretty fancypants (seafood, duck, dove?!?!), so I nixed that idea real quick.  I'm just not a big foodie.

So, instead, we went to Grand Californian's other restaurant for dinner - Storyteller's Cafe.

I've never eaten there before - typically when I'm at the parks, we just eat at one of the restaurants there (I don't typically spend too much time at Downtown Disney these days - by the time we're done at the parks, I'm pretty pooped).  We didn't make reservations and there was only about a 15 minute wait for a table. 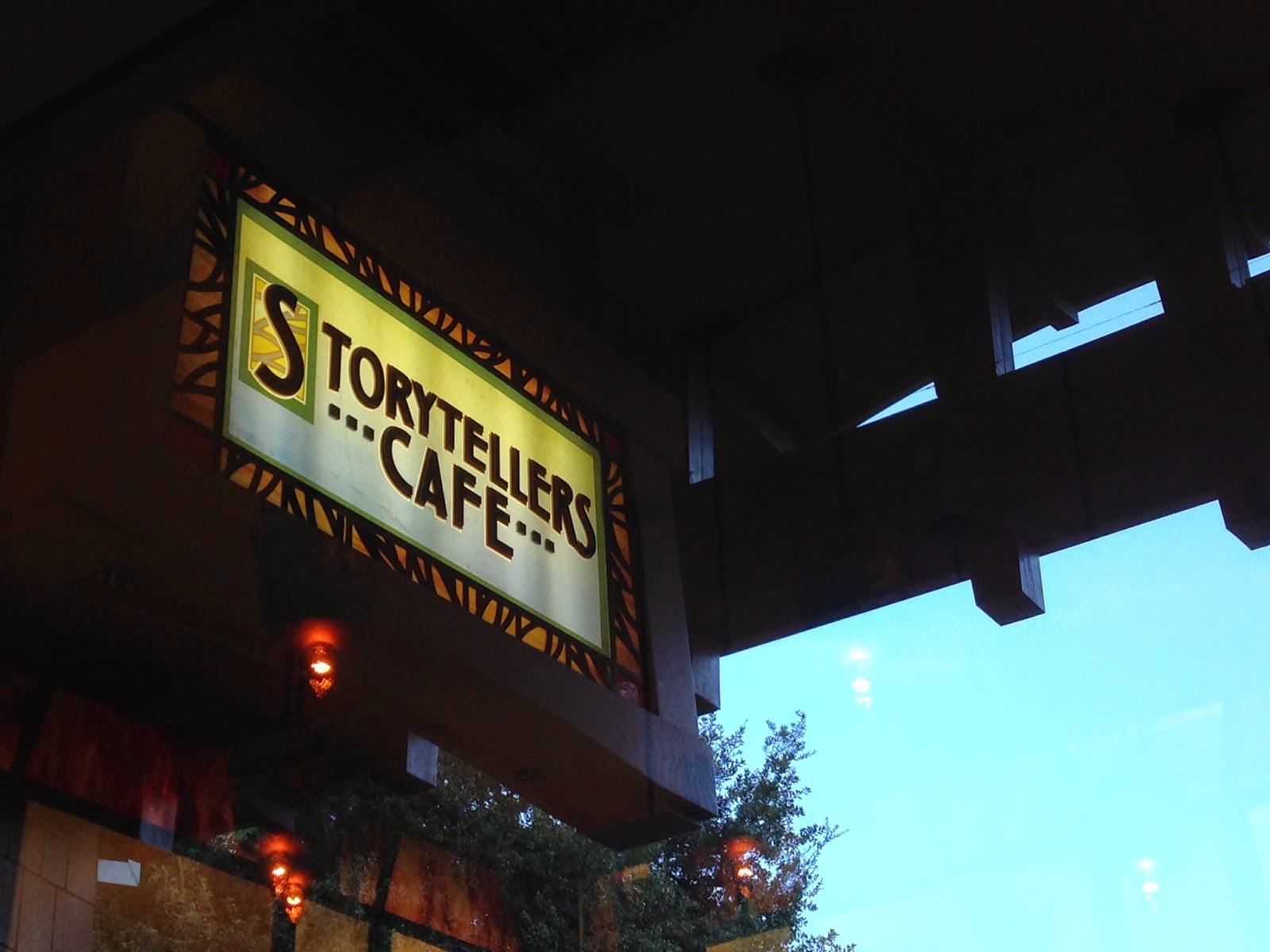 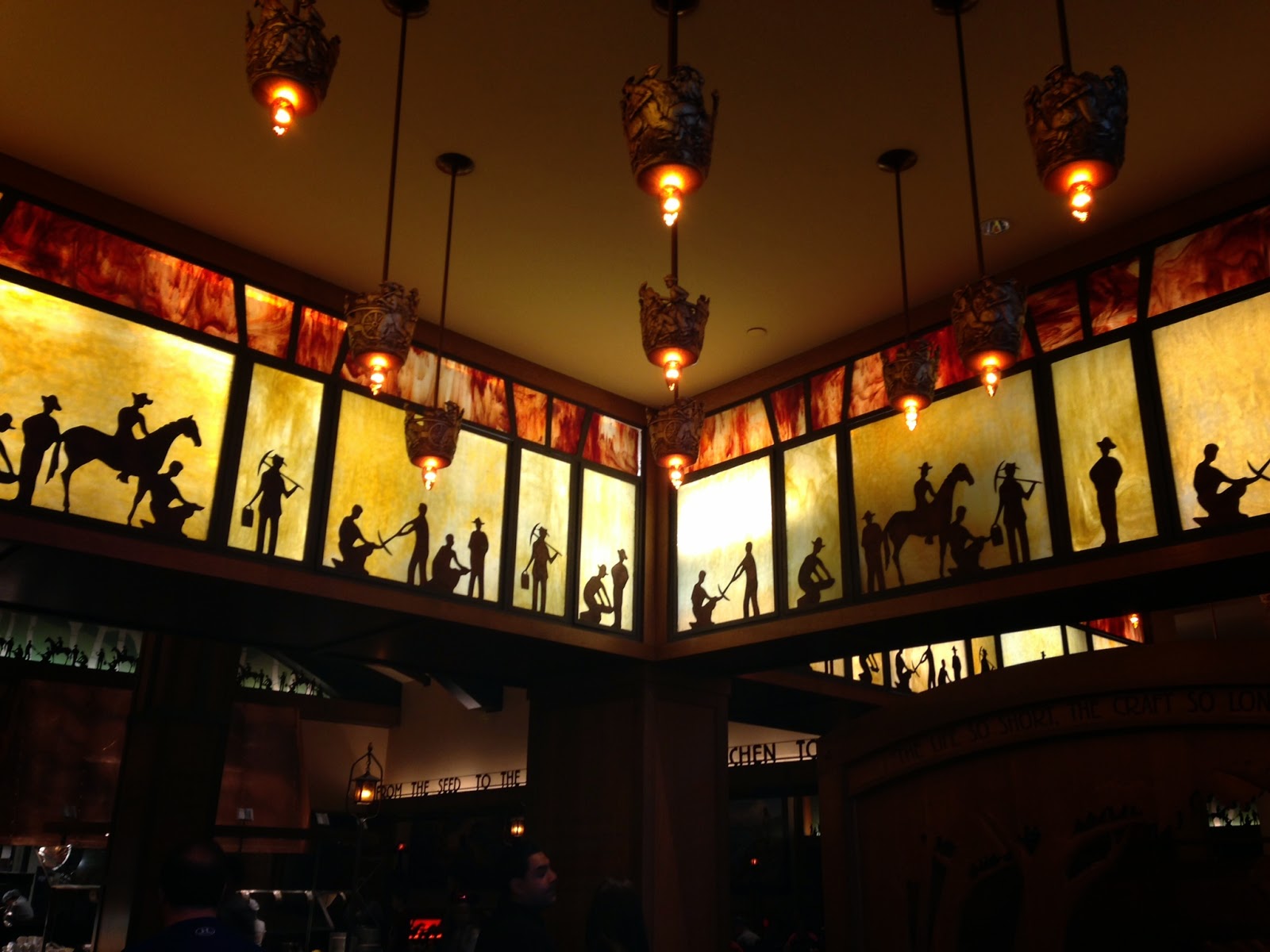 It has a really rustic atmosphere and I loved all of the wood beams. 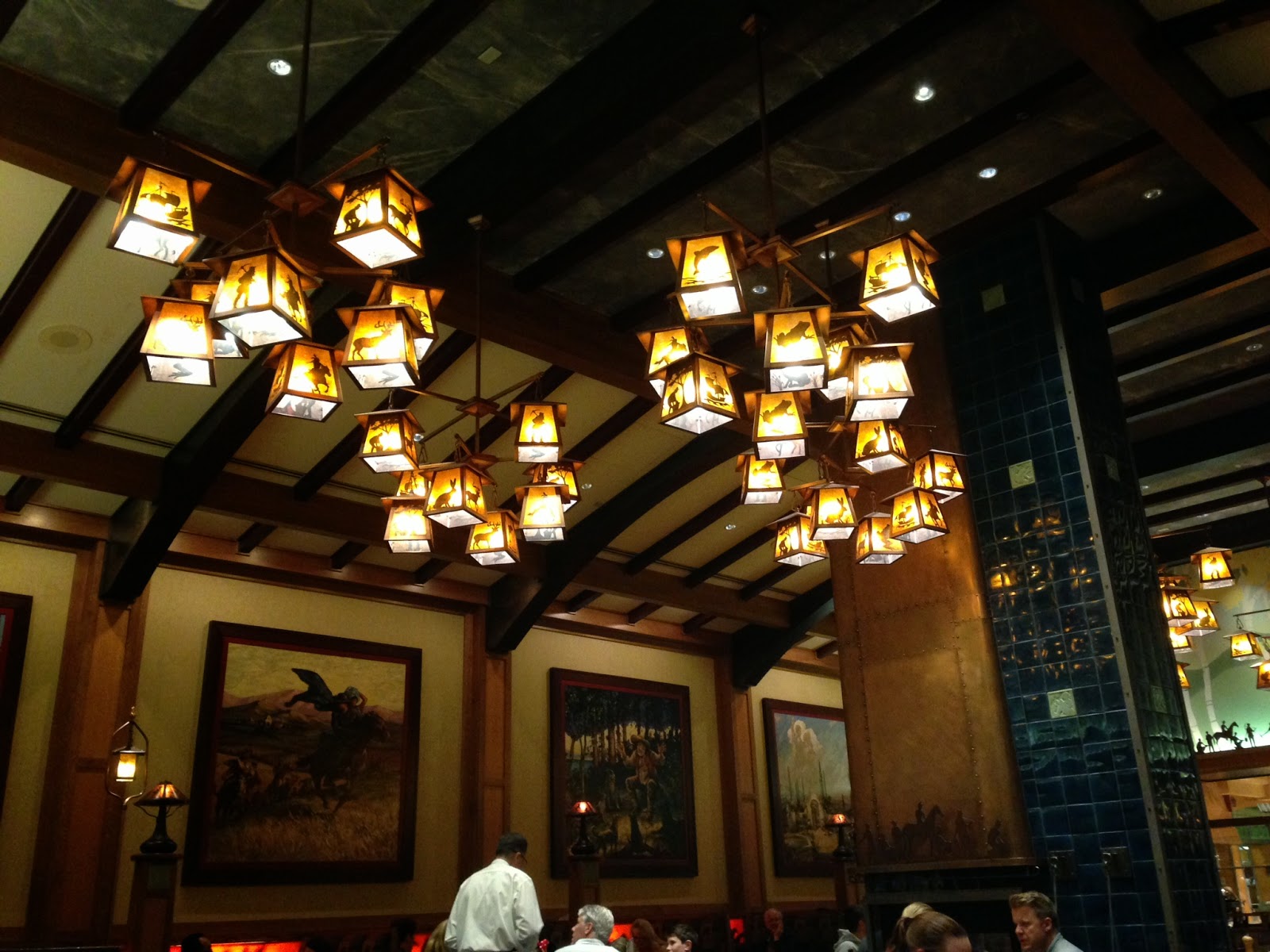 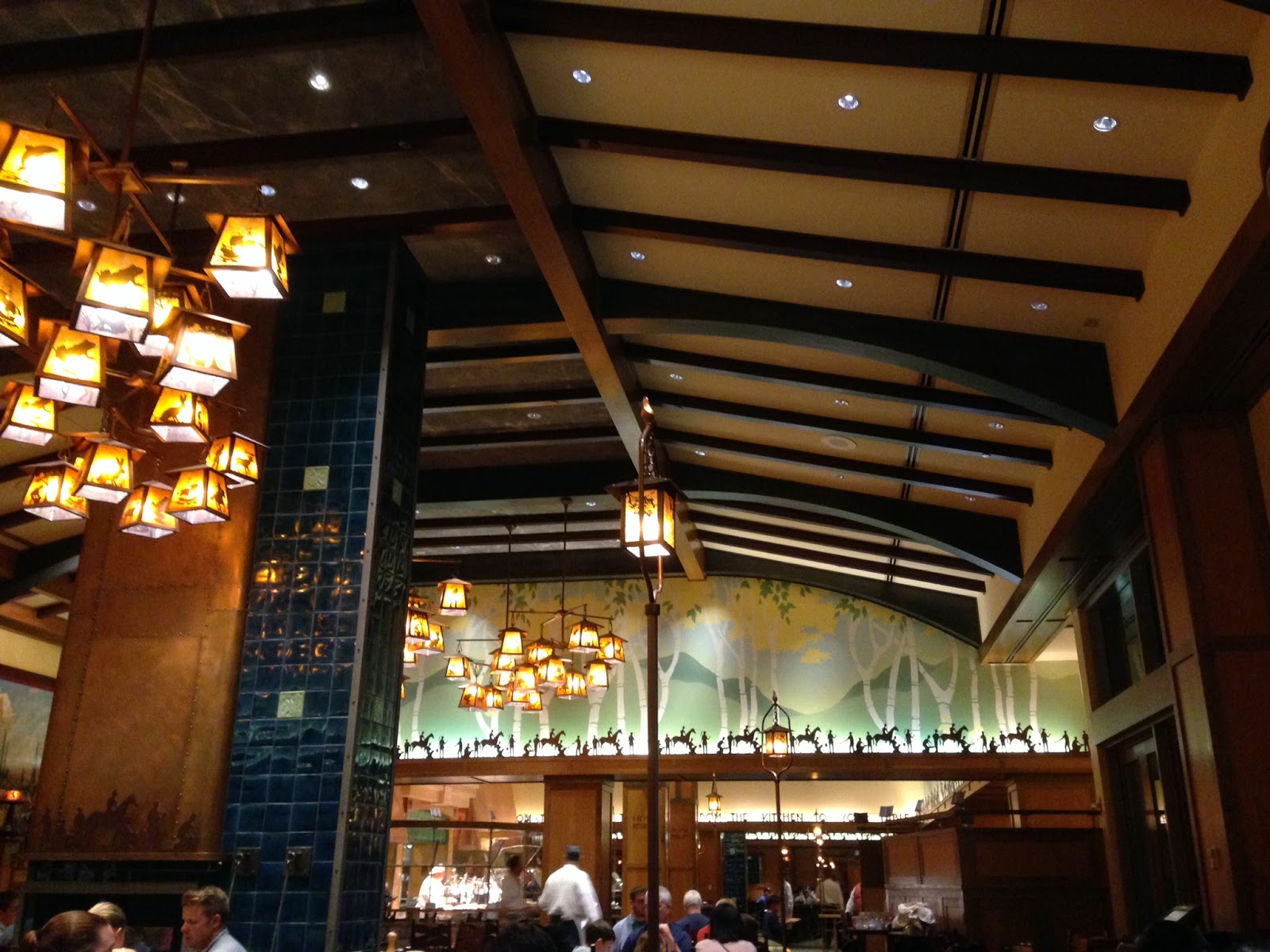 They have a buffet, but we ordered off the menu.  I ordered the spaghetti.  I know, I know.  How could I order just spaghetti?  I was actually not too hungry because we had just eaten lots of popcorn at the movie.  Also, I have yet to find a store-bought spaghetti sauce that I love, so I thought I'd try their's and it was really yummy.  Bonus?  Spaghetti makes for great leftovers and I had it for lunch the next day.  :) 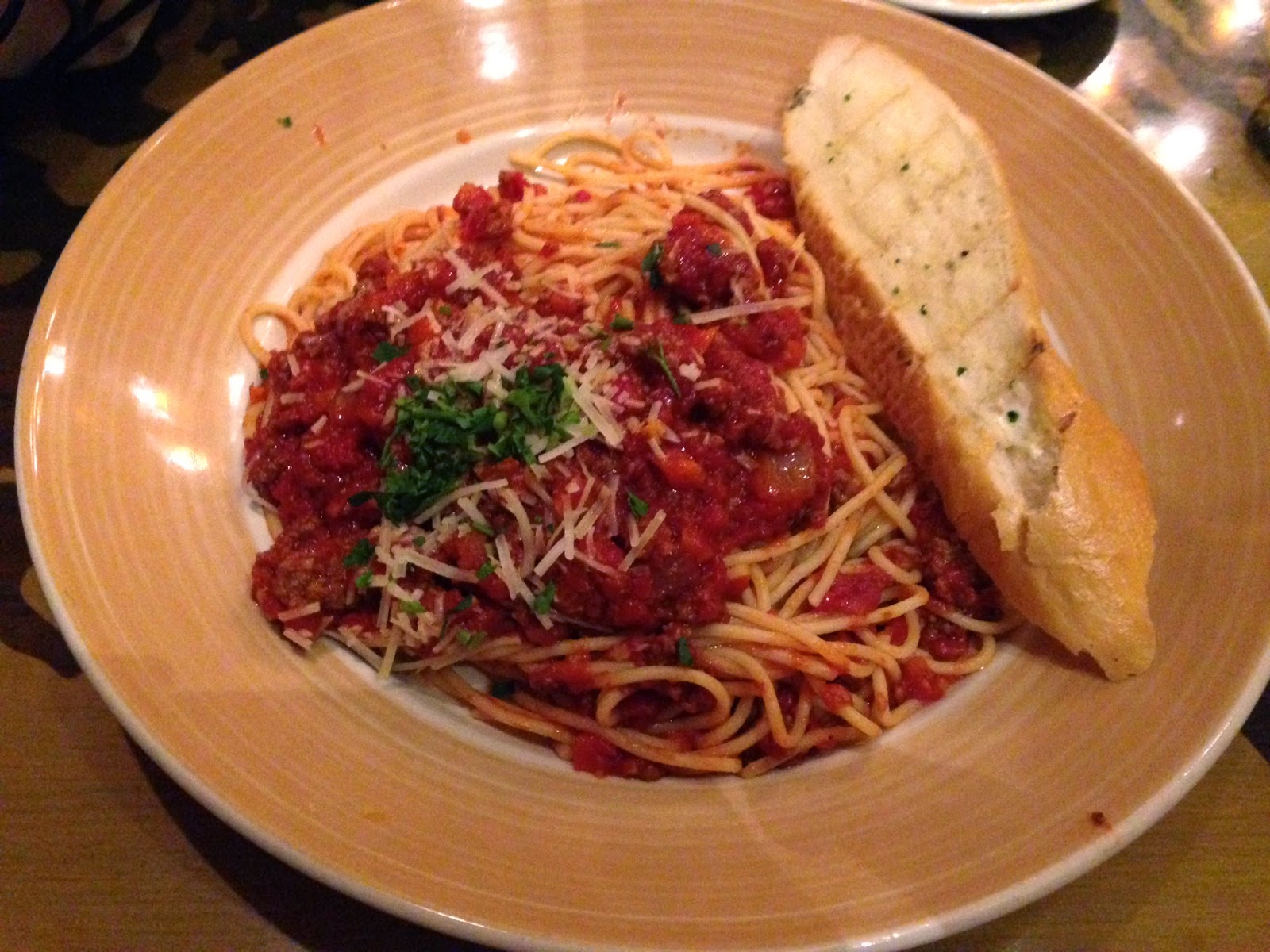 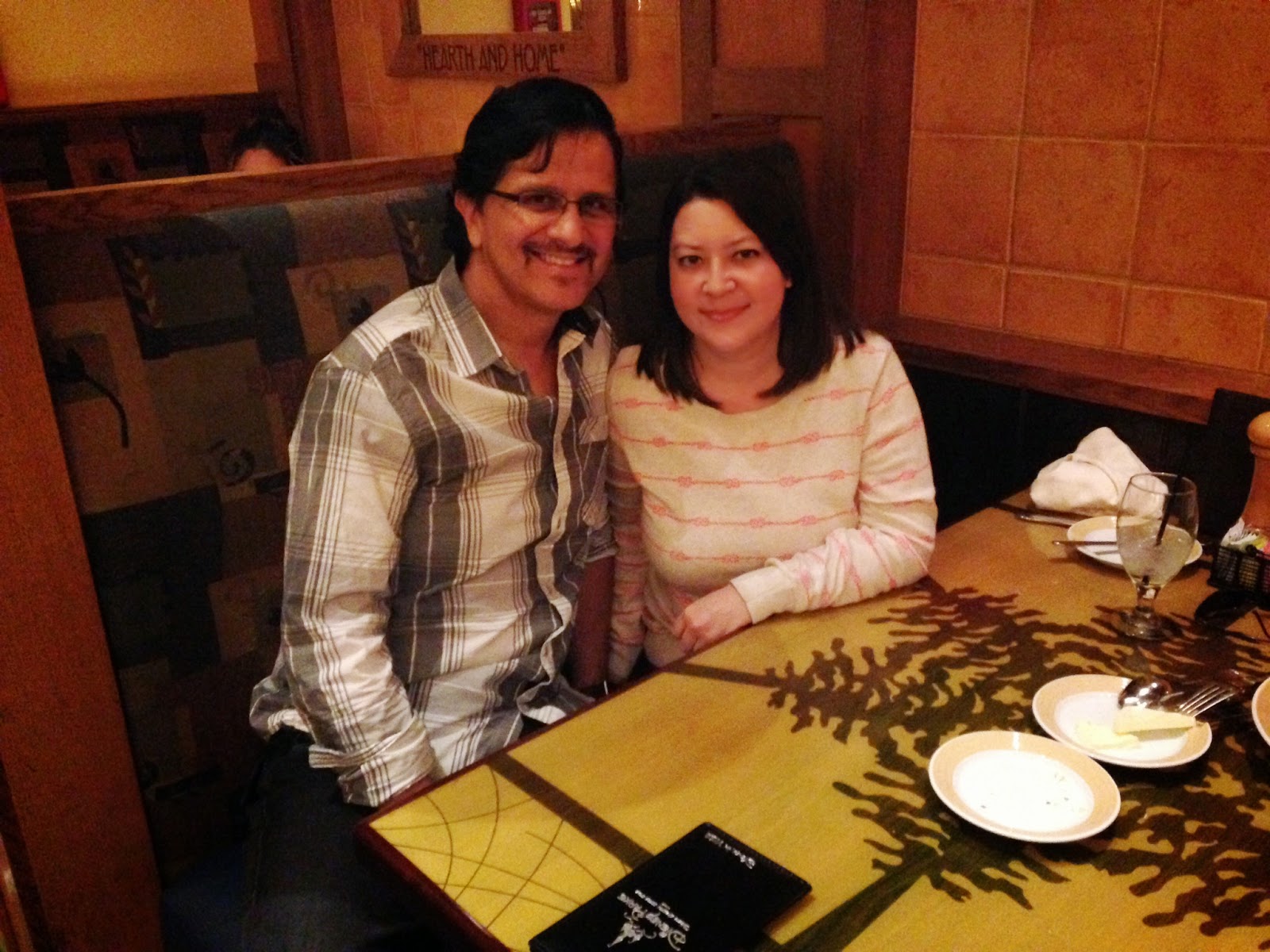 Before leaving the Grand Californian, we took a look at their awesome lobby.  It's 6 stories tall! 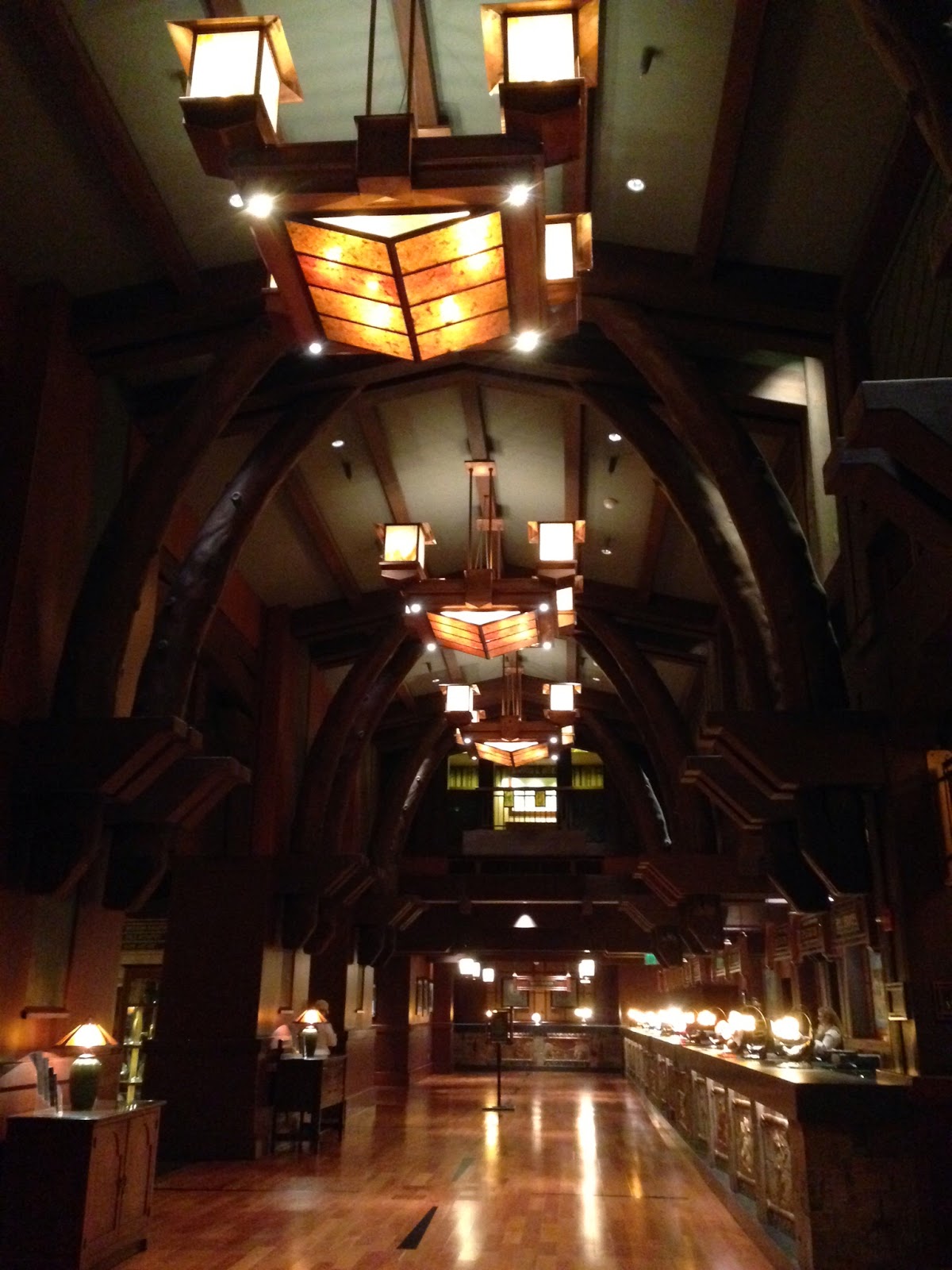 We wandered around Downtown Disney for a bit after leaving the Grand Californian.  At the Lego Store, I love all of the huge Disney character figures they have built out of Legos.  This is a newer one I hadn't seen before.  This Genie was HUGE and hanging from the ceiling.  Amazing! 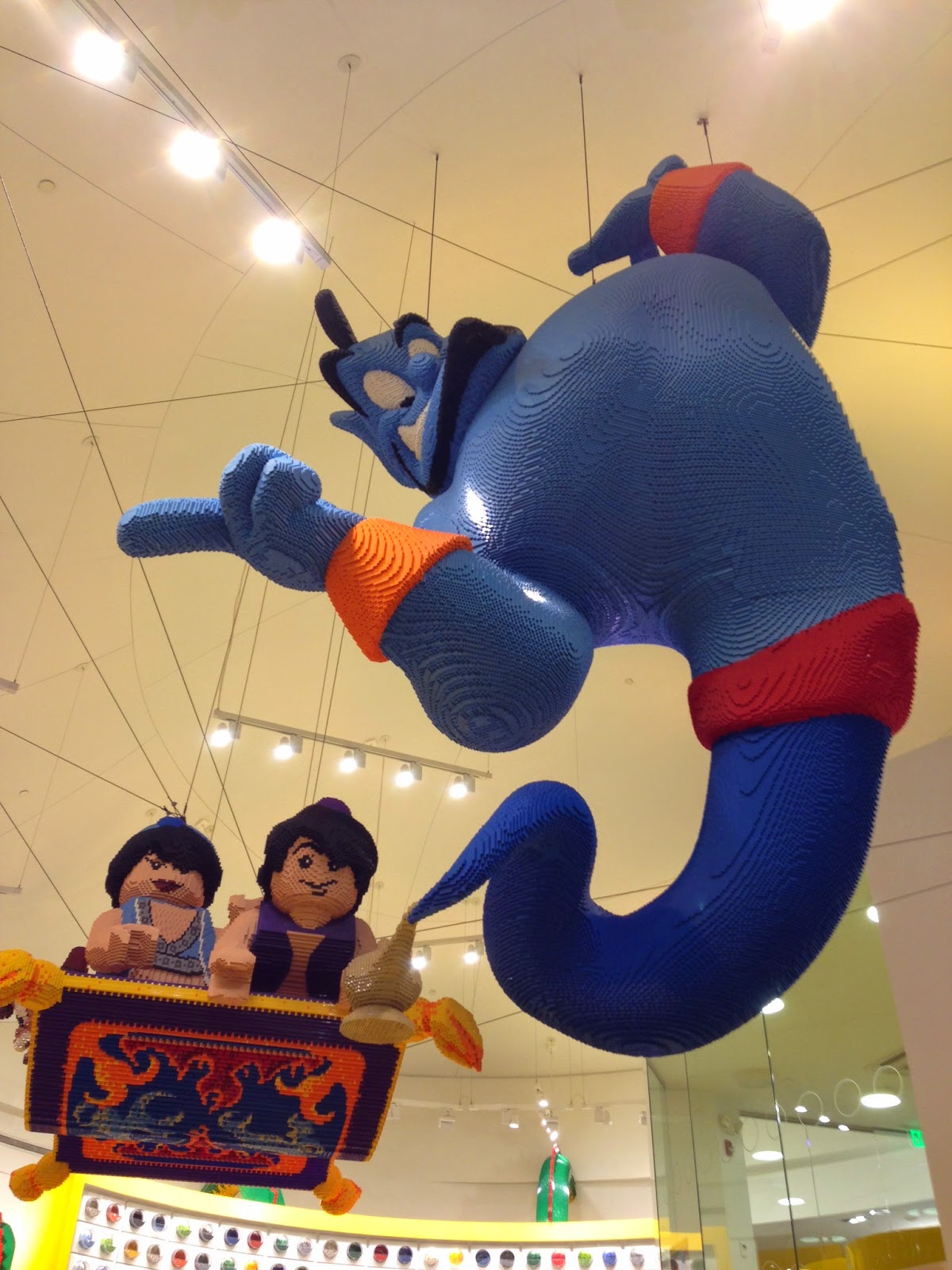 And my birthday dessert?  Beignets from the Jazz Kitchen Express!  I loooove beignets and hadn't had them for a long time.
I'm drooling just looking at this picture! 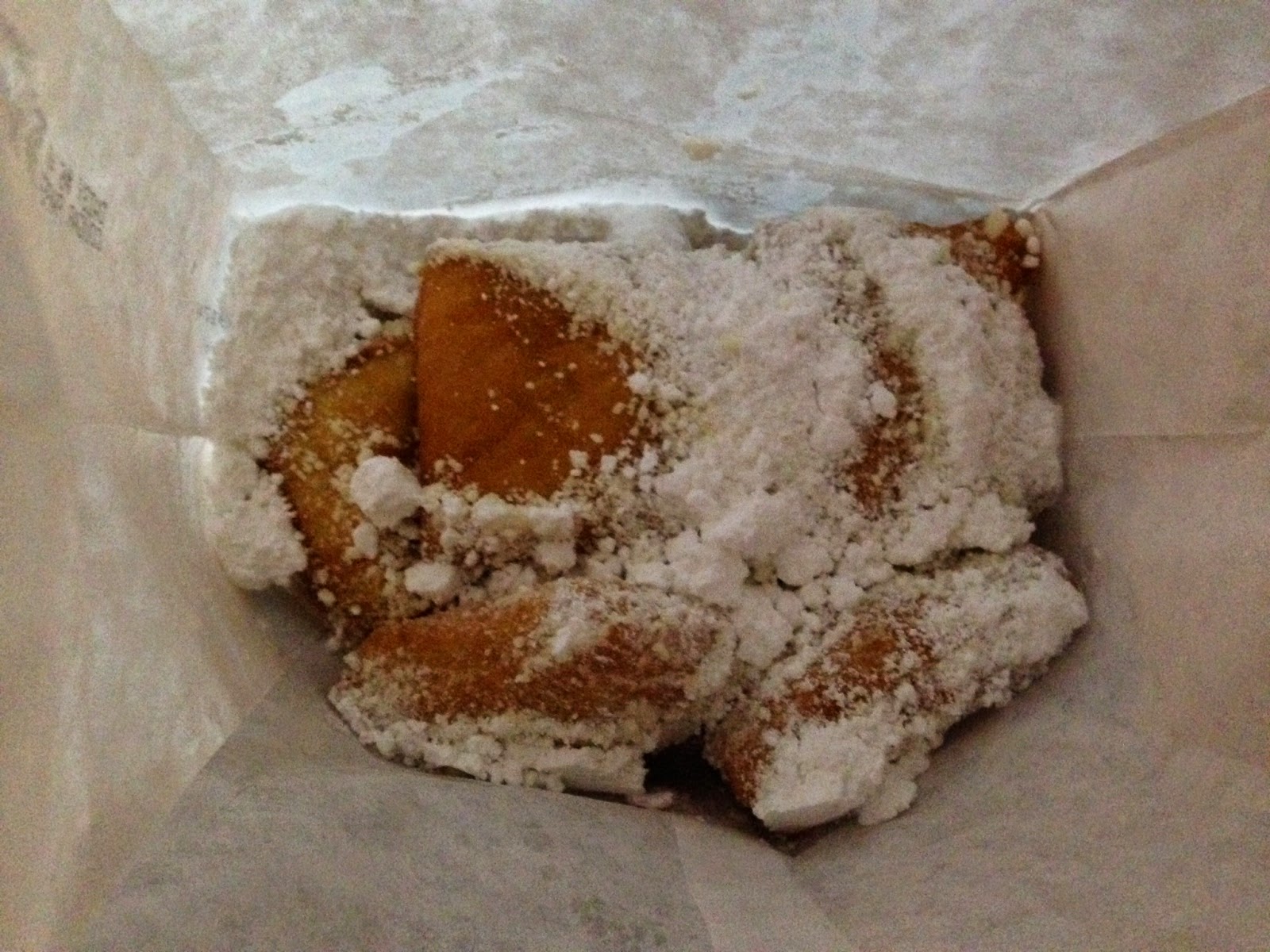 I like how you can watch them making the beignets. 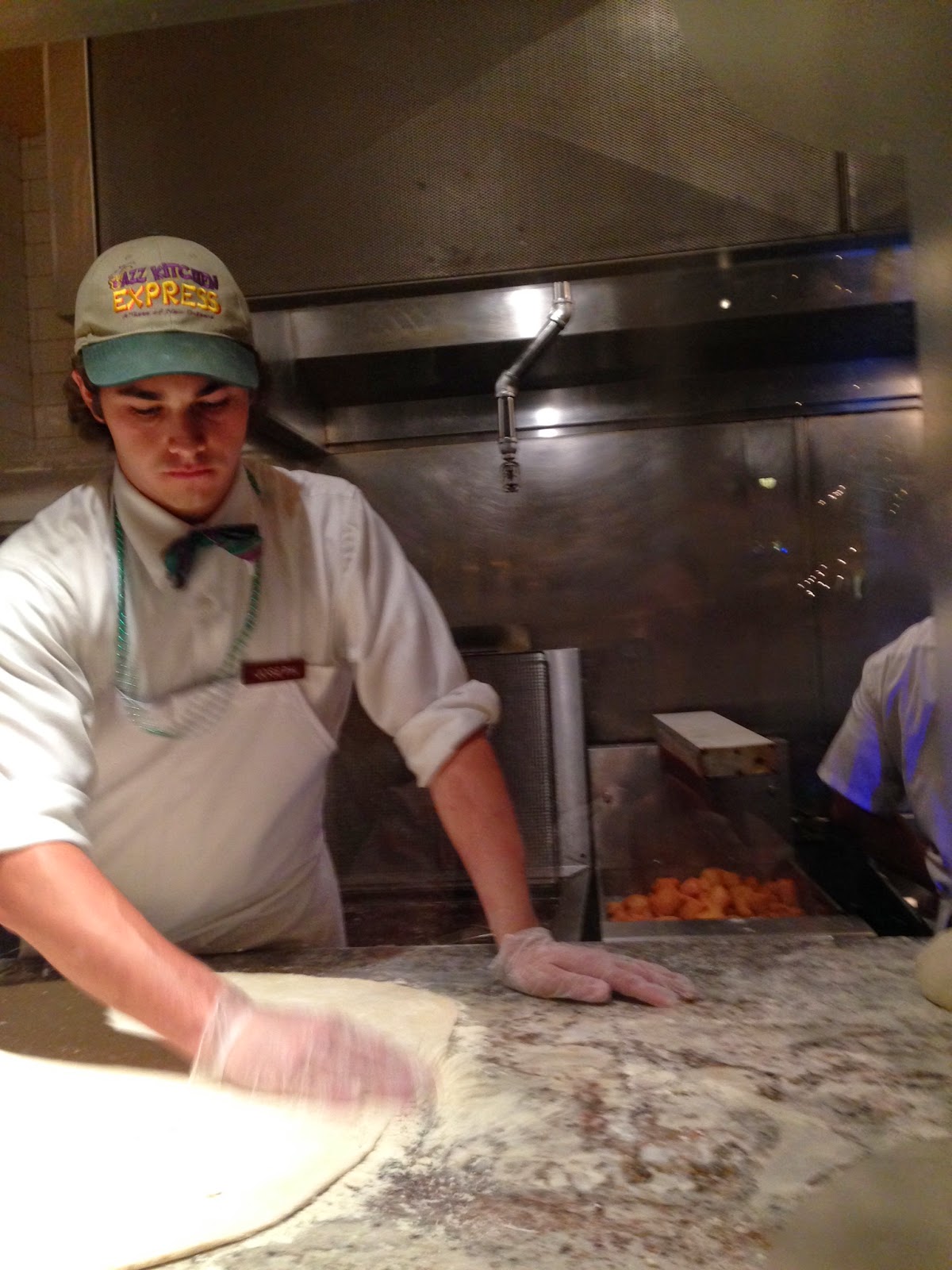 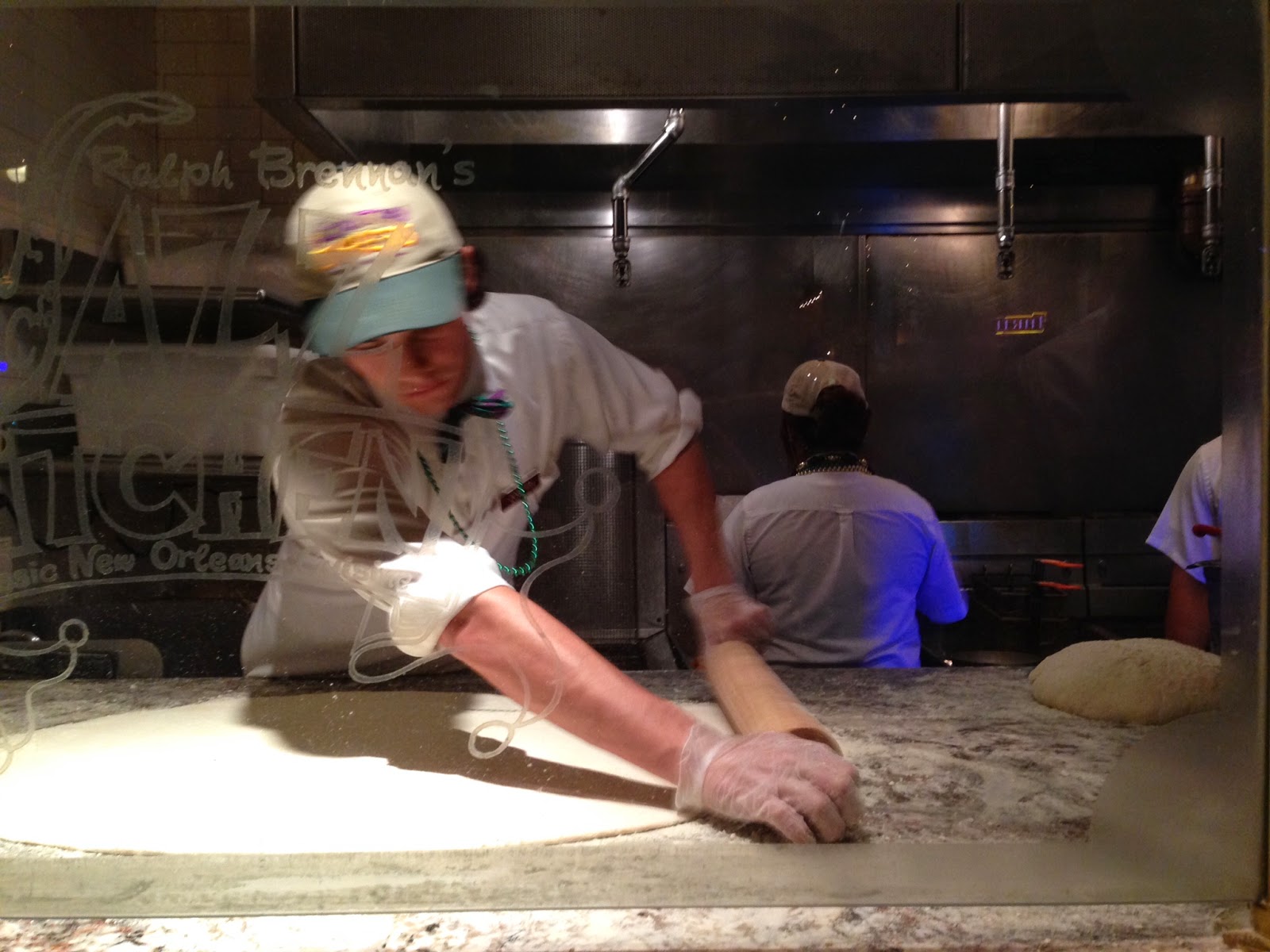 It's been awhile since I've had a really great birthday, but this was definitely one of them!