Hello, there!  Did anyone go to any Halloween parties this past weekend?  One of my friends has a party every year, so I had been brainstorming for the last few months on what I should be.  I didn't have any good ideas, however when I got back from my trip to Italy, I got inspired.  I tried to think of characters having to do with Italy and Cleopatra popped in my brain.  Although, she was Egyptian, she was associated with the famous Italians, Julius Caesar and Mark Antony.  Further inspiration:  I was scheduled to have an appointment for a hair cut right before the party - I had been thinking to cut my hair shorter for awhile and thought it would be perfect for a Cleopatra costume.  Costumes for an "Egyptian queen" at retail stores were running about $40 and I definitely was not going to pay that since I thought I could come up with something myself.  So, with the decision made and only a week to pull it together, this is what I came up with.

Materials:
* White material (I originally planned on buying a white twin flat sheet from Walmart for cheap, but they were out of stock, of course) - I bought 2 yards of muslin, but should have gotten at least 3.  Cost: $3.94, but it was free since I noticed later that they forgot to charge me!
* Gold material - 1 yard. Cost: $2.07
* Sewing machine - it's much easier to use the machine, than hand-sew it
* Thread (already had - I happened to have gold thread and decided to use that)
* Elastic (already had from last years's Miss Potato Head costume)

1)  After I bought the white muslin, I noticed it was a bit see-through (you can see my hand through the fabric in the picture below).  I had to double-up on it so it wouldn't be, which was the reason that the 2 yards I bought wasn't enough.  I just folded what I had in half and pinned along the sides to keep it together. 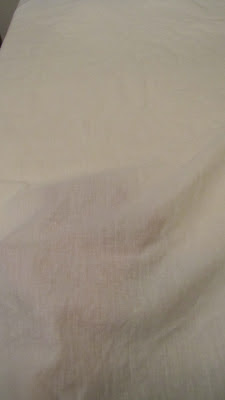 2)  After folding it half, I didn't have enough fabric to do much with.  It wouldn't even wrap completely around me.  I had planned to use the gold fabric as some sort of sash, but used it as part of the dress instead.  I didn't even measure it - I had eyeballed about how much of the gold fabric I would and just cut a straight piece. 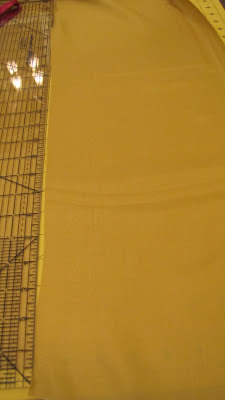 3)  I pinned both sides of the white muslin to the gold fabric.  (The piece is a straight rectangle - the picture below makes it look smaller at the top, but the pinned piece at the top is just sticking up more than the bottom).  Once I pinned it, I just sewed them together.  I then sewed a hem at the bottom of the dress. 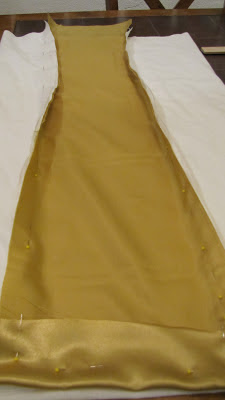 4)  Next, I needed to install the elastic to help keep the dress up (I originally planned for it to be strapless).  I folded the top of the costume down onto the wrong side.  Once again, I just eyeballed it, but put the elastic on top to make sure I was allowing enough room to thread the elastic through.  I pinned all the way around the entire piece and then sewed it. 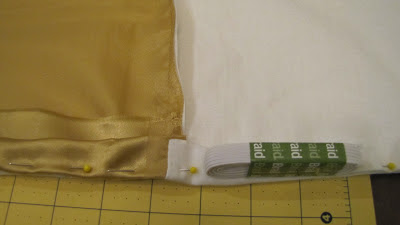 5)  I left an opening in the back so I could thread the elastic through. 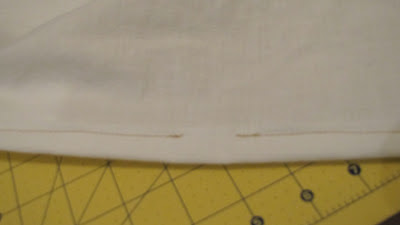 Using a safety pin at the end of the elastic, I just pushed it through the opening and threaded it through. 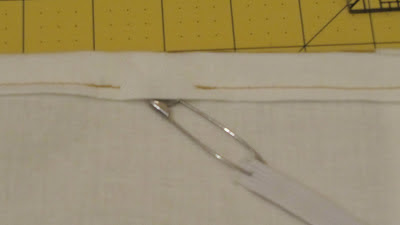 6)  Once I threaded it all the way through, I pulled on the elastic until I got it as tight as I needed.  I cut the elastic where I wanted it to end and stuffed the ends into the opening and pinned the ends to the dress.  Then, I sewed over the elastic to keep it permanently in place and sewed the opening closed. 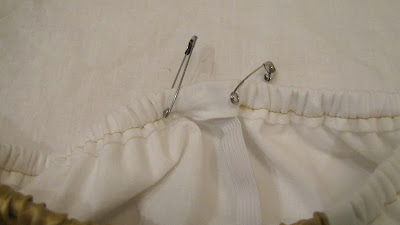 7)  While working on the dress, I was watching TV and one of the characters on the show had a dress on with one strap that started in the front, went across one shoulder to the back.  I thought that was a nice look and since the dress needed a bit of jazzing up, I decided to try that (plus, it would help keep the dress up in place - even with elastic, things tend to creep down especially when you are sitting position).  So, I cut a strip of the gold fabric, folded it in half length-wise and sewed up two sides.  Leaving one side open, I turned it right-side out.  I then pinned one end to the middle of the front side and pinned the other end to the middle of the back side and sewed them to the dress. 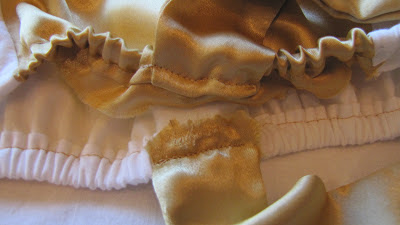 8)  Now that the dress was finished,  I tried on the dress again.  It kind of poofed out just under the elastic, making it look a bit frumpy and baggy.  Since I have never sewn clothes before, I didn't know how to make it more fitted.  So, while I had it on, I just pulled and cinched up in the middle of the back side and used a safety pin. 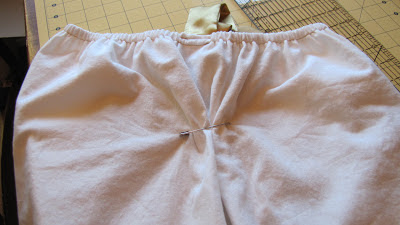 9)  I then made another gold strip in the same exact way as I did for the strap.   I cut a tiny slit in the material on both sides where the safety pin goes into the material and comes out.  I threaded my new gold strip through one side and brought it out of the other side and tied a knot.   This helped to keep the dress a bit more fitted and not so baggy.  (Although, the first time I did it, I didn't cut the slits far enough apart and the dress was still a bit baggy when I wore it to the party.  I fixed it afterwards, so it's fine now). 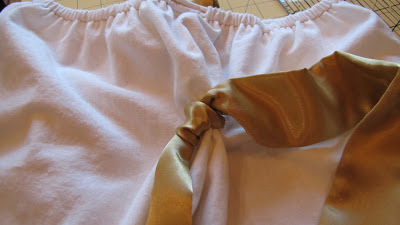 Unfortunately, I don't have any good pictures of just myself in full costume.  When I dress up for trick-or-treating with my niece and nephew, I'll try to have my sister take some and I'll post an update. :)  Here's a few cropped pictures from the party the other night (the innocent have been cropped out for their protection. ha ha). 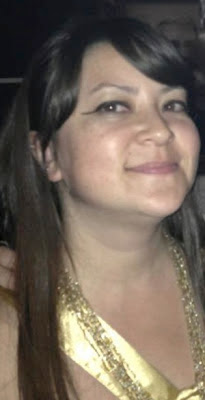 At the last minute, the girl who does my hair had to postpone my appointment, so I was bummed because the shorter cut and bang trim was one of my inspirations for the costume in the first place.  I am waaaaay overdue for a cut and my bangs were way too long to keep them going straight across like the Liz Taylor version of Cleopatra.
To complete my costume, I tried to make a neck piece (in place of big jewelry), but it didn't work out.  I ended up remembering at the last minute that my mom's friend had made a big beaded necklace for me.  I wasn't sure if I still had it, but I found it!  And I originally thought it was black, but it was gold!  Score!  My friend also had a gold headband which I threw on at the last minute and  I wore a big black ring that I often wear on regular days.  (I really wanted a gold cuff to wear on my arm, but didn't have one).  I also extended my eyeliner to give that Cleopatra look and wore really dark eyeshadow.  I'm not good with putting on makeup, so it was minimal, but I think the eyeliner was the most important part of the Cleopatra makeup.

I can always wear this again in a couple of years and improve it since I didn't have much time to work on it.   (I have an idea for a really chunky, big necklace, but didn't think of it until the day of the party so no time to get it done).  And check out this head piece!
It would be really sweet if I could make some kind of neat piece like that too!  Adding these cool accessories to it would make it seem like a whole new costume!
Happy Halloween everyone!

Posted by Chrissy @ Adventures in DIY at 1:06 AM