One of the projects I was most excited about this year was having a new front door installed.  When my friend and her family came to stay with me for a week, her handy hubby was kind enough to install the new door for me.  How awesome is that?!?!  So, why was it so exciting for me?

1)  The old door's paint was chipping and this exposed the metal door.  Because of the metal's exposure to the elements, it rusted in some spots.
2)  The old door was very dated.
3)  The seal at bottom of the door would often slide out.
4)  The door was also put on a tiny bit crooked so there was a little crack at the bottom corner that you could see light coming through.
5)  Because the door was put on crooked, it was a tad difficult to close and lock the door from the inside.  You had to do a "hip bump" move while locking it at the same time.
6)  The deadbolt didn't quite fit right - I couldn't unlock it with the key.

Pretty much since the very moment I bought the house, I decided to buy a new door.  I wasn't sure when this would happen, but I seized the opportunity of my friends' visit and decided to get it done now!  I wanted to order the new door online because it would be easiest to have it delivered to my home.  As much as I would have loved to have a door like this...
...I couldn't justify spending that much money on a door.  Plus, it doesn't really match the look of my home (although I wish my home's exterior would match this look!).  I also decided that I would like to have a door with windows so it would bring more light inside that part of the house,  but  I didn't want for it to be easy for people to see inside the windows.  So, I decided on this simple door...
...nothing too fancy, would match any type of exterior, and is a decent price.  The windows are high enough that you can't see what's going on inside the house from the street view, but I will still need to cover them some how because anyone can still peek through when at the door (I'm thinking of putting some kind of frosted window film on them as opposed to using curtains). I ordered the door just in the nick of time.  It got here just days before my friends showed up.  Whew!  I was really stressin' for a second, so I would suggest that if you have a deadline of when you need to order a door, order it at least a month ahead of time if not sooner!

Here are some shots of the original door.  You can see how the lighting is bad in the first picture - there is no source of natural light on this side, so it's always a bit darker.  You can also see in the second picture all the spots where the paint was coming off.  Ugh - and that ugly trim! 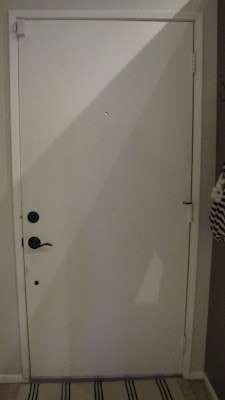 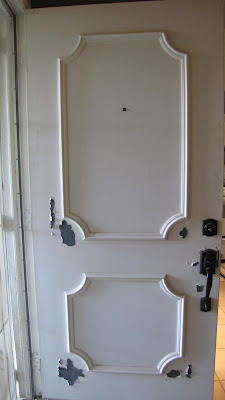 Here are some close-ups.  You can see the rust in the top picture.  Poor, poor, sad little door. 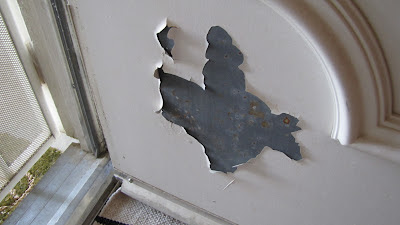 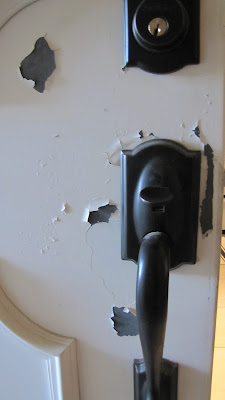 So, it was time to put in the new door.  Off came the trim.  I decided to also have the trim completely replaced because a friend's dog clawed & chewed up the bottom piece of it.  :( 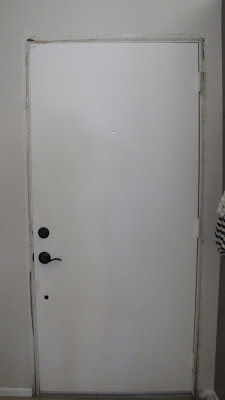 And well, there always has to be some kind of issue with a home project, right?  Even though my new door was of "standard" size, it was still a bit too tall for my old door's frame.  Because my friends were from Utah and had to bring some tools with them, they didn't have the proper tool to make the frame bigger (since this issue was unexpected) and I didn't have it either, so off to Home Depot my friend's handy hubby went to go get it (sorry!).  Once he did that, he was able to install the new door with no problem.  And not to worry - a bit of foamy stuff filled in all the gaps.  Whew! 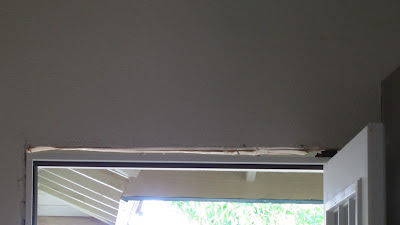 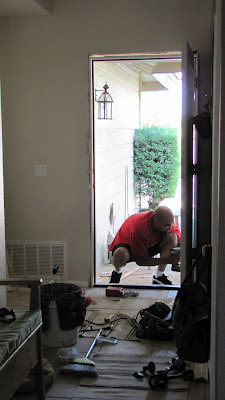 Here's the new trim I picked for the door.  My french doors that lead to the back yard already had a nice trim around them, so I tried to pick trim for the front door that was very close to it.  It's close enough that you can't really tell the difference. 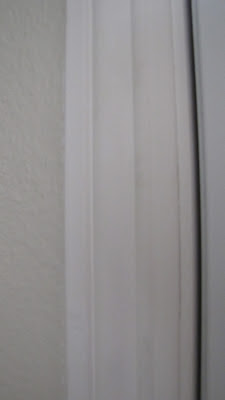 And here is the new door installed and trimmed out! 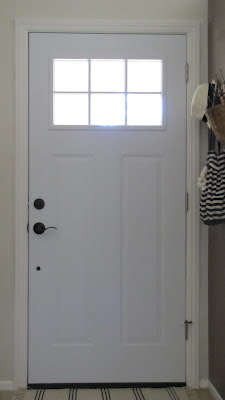 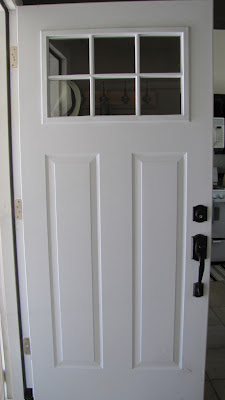 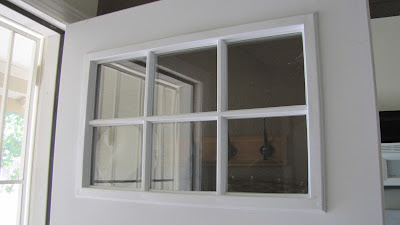 I just need to figure out how I'm going to cover those windows for privacy and need to paint it.  For now, I'm just going to paint the inside part of the door a bright white and I'm not going to paint the outside part of the door until I have the exterior of the house painted (which won't be happening anytime soon - the house has hunter green trim, light brown trim, and the main part of the house is a tan color.  It needs a major update, but I need to get some other projects done first). But, I'm just in love with my new door!  It has resolved all the issues I had with the old door.

Thanks for looking!  I hope everyone has a great week and stay cool!
Posted by http://adventuresindiy1759.blogspot.com/

Linked up to:
Thrifty Decor Chick's September Before and After Party

Posted by Chrissy @ Adventures in DIY at 1:27 AM