I know a lot of you have kids that have already started back to school or will start this week, but for me, summer is still in gear.  The weather has been almost too unbearable (100+ for the last week or two) to be hanging out outside.  This past weekend was pretty bad because we had thunderstorms and a bit of rain, so it also brought the humidity.  Humidity = m.i.s.e.r.y!  But, I did do something pretty fun and was able to get out of this gross weather.

I went ziplining with some friends in Big Bear and it was super fun!  I had never been ziplining before and will admit that I was a bit nervous.   I've always wanted to try it, but thought I would chicken out once I would have to step off the platform.  I was surprised that it didn't take much for me to just step off and let myself fly and after the first few ziplines, I got the hang of it.  From what we were told, this was "real" ziplining, in which we would be controlling our movements and braking with our own hands.  I am going to share a few more pictures and I know I might look like I'm not having fun, but I was just trying to concentrate on keeping myself straight so I wouldn't spin and also was paying attention for the hand signals of when to brake, etc from our guides (a couple of times I had a pretty fast landing!).   But, it was a lot of fun and I would do it again. 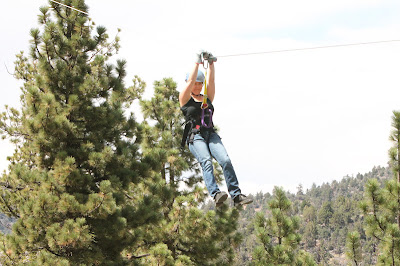 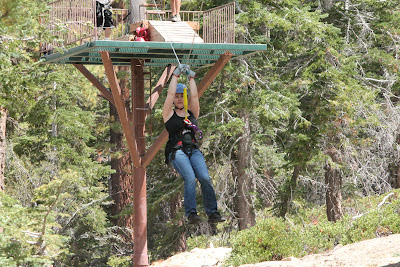 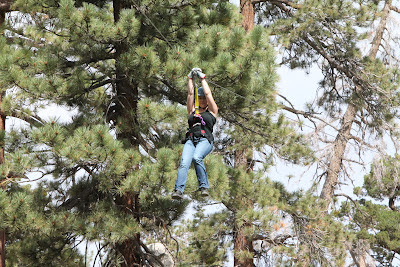 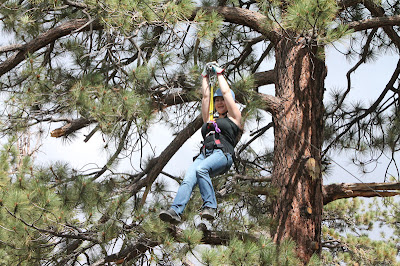 On the way up the mountain, we got lots of rain - HUGE rain drops and were worried about the zipline tour being cancelled.  But when we got to the office, they said that the ziplines are at a higher elevation and had been sunny at the site all day.  But the rain and the higher elevation meant we were having much cooler weather than we had been used to down the hill, which was a nice relief.  And sure enough, at the ziplines, the weather was sunny with few scattered clouds and was really nice.  Perfect ziplining weather!  If you live in the area (I live in Southern California and the zipline tour is in Big Bear Lake) and are interested in this particular zipline tour, here is their website: Action Zipline Tours.  It's open year round.  At their office, they even had pictures of people ziplining after it had snowed.  I think it would be fun to go during the winter and do it with the snow in the background - the tour guides said that people even throw snowballs at the person who is zipping down the line!  How fun!

I hope everyone has had a great summer or is still enjoying their summer and if not - go have some fun!

Thanks for stopping by!
Posted by http://adventuresindiy1759.blogspot.com/
Posted by Chrissy @ Adventures in DIY at 12:00 AM

Email ThisBlogThis!Share to TwitterShare to FacebookShare to Pinterest
Labels: Fun