Reorganizing Under the Kitchen Sink

Oh boy - all of my project plans went out the door this weekend.  I've been fighting a cold, so didn't end up getting much on my list done.  I did manage to get a small project done - I reorganized under my kitchen sink, which was spurred on by my idea to "reorganize" my trash & recycle bins.

For the last few years, my trash & recycle bins have been living right here in the kitchen, next to the archway that goes into the dining room.  This was the only real "free" spot for them in the kitchen and while the trash can is nice, the recycle bin isn't.  They weren't in the way too much since the archway was big enough, but sometimes they managed to get in the way. 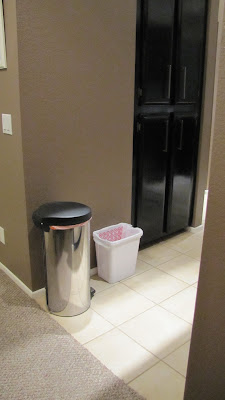 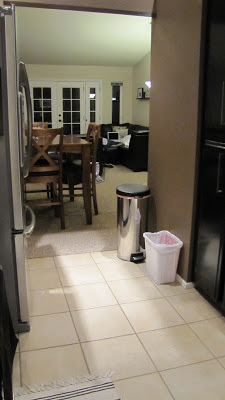 Then, I discovered this.
It's exactly what I was looking for, but with a $179.99 price tag (even with a 20% off coupon, it would still come out to be just over $145!), there was no way I could justify shelling out that much money for it - there's just way too many other things that I could buy with that!  So, I started thinking of alternative ways of placing my trash & recycle bins.  I had previously thought of putting the recycle bin under the sink, but for whatever reason, I didn't.  It's possible one of the reasons is my ant problem.  I considered  this again and decided that in all the time I have had the bin out in the open, I've never seen ants in the trash (KNOCK ON WOOD!!!!).  I'm always really good about rinsing any soda cans out and most other things that go in there are cardboard or paper or bottles with lids.  So, I decided to give it a try.

But, first things first - if I was going to put it under the kitchen sink, that meant reorganizing under there.  This is what it looked like "before". 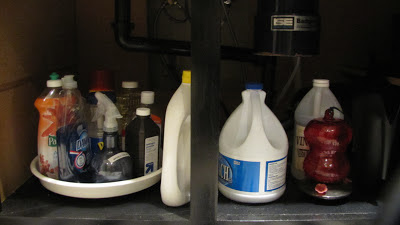 Not too bad, but definitely no room for my little recycle bin.  So, I took everything out and wiped the bottom of the cabinet clean. 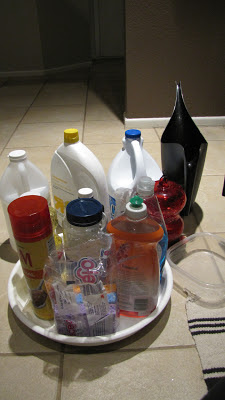 Since I already kept it pretty organized under there, I didn't need to do much purging.  However, the black watering can & red hummingbird feeder got the boot.  They will be moved to the garage with the other garden stuff (that will get reorganized once I put together the metal shelving unit I bought - that was supposed to be my other project this weekend, but I didn't get to it).  I first put the recycle bin in the only spot that would fit - the only spot without pipes.  Then, I put everything else back. 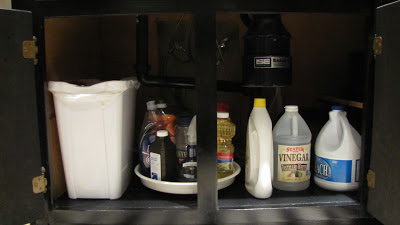 I bought that big lazy susan at the Container Store years ago for the sole purpose of using it under the sink and it's worked out perfectly.  You can see that there's a piece of black wood in the middle (between the doors) and the lazy susan is perfect for the spot behind it because all I have to do is turn it to easily reach what I need.  That bottle of bleach will mostly like get moved to garage once I rearrange my laundry area in the garage.  Baby steps, people.  Baby steps.

Also, I've had the recycle bin under the sink for a couple of days now and so far so good - no ants (KNOCK ON WOOD!!!).  I'll continue to rinse out any cans and keep as much non-food & non-drink residue out of there.  That's the last thing I want to do is clean up a bunch of ants under the sink where it's hard to get under.  Ugh.

Once I moved the recycle bin, the trash can was all by it's lonesome.  I decided to move it next to the dishwasher.  Yes, it's blocking that little bottom cabinet, but I don't get in there that much.  I do use 2 appliances in there sometimes, but when the pantry gets reorganized (baby steps, remember?) at least one of those appliances, if not both, will get moved to the pantry.  I do use that little drawer often and it still opens without hitting the trash can.  Also, I can open the dishwasher without hitting it either.  Score! 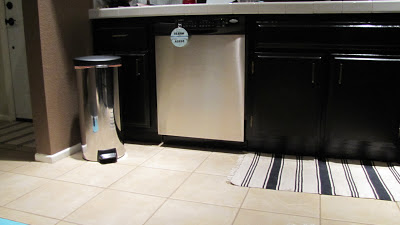 So, here's a before & after (let's face it, these aren't the prettiest pictures, but it'll show you the difference a quick rearrangement will do):
BEFORE 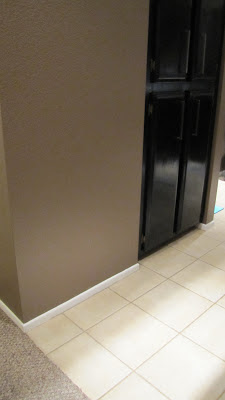 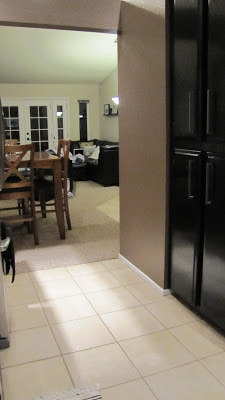 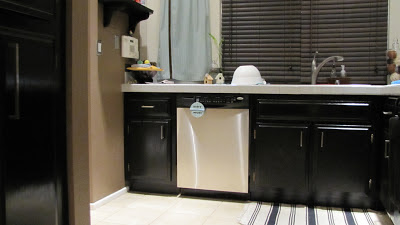 I think this post took me longer to write than to actually do it.  Seriously.  And it's an awfully long post about moving trash cans and stuff under a sink.  But, it's nice to have those out of the way now - gives the kitchen a cleaner look.  Thanks for stopping by and I hope everyone had a great weekend!

Originally posted by: Adventures in DIY

Posted by Chrissy @ Adventures in DIY at 3:06 AM