It's not even Thanksgiving yet and I've already had a screw-up in the kitchen.

This year, so I wouldn't have to make more than one trip to the grocery store, I wrote up my shopping list and checked several times to make sure I wasn't missing anything.  Off to the store I went and got all my supplies.

A few days later, I decided to bake something in the oven and pre-heated it.  After about 10 minutes, it started smelling like burning paper.  I ran over to the oven and right before I opened the oven door, I realized what it was.  See, when I was putting the groceries away a few days prior, I had decided to put the foil baking pan in the oven with the oven bags in it because I didn't have any room in the pantry and didn't want to leave them on the kitchen counter.  Yep - I had forgotten to take them out of the oven before I pre-heated it.  I had a feeling that might happen.  Hmmph.

At first, I wasn't sure if the bags were affected.   I mean, they had only been pre-heated for about 10 minutes.   I couldn't remember what they looked like.  As you can see in the picture below, the non-baked bags on the left are still clear.  And the baked oven bags on the right had a brown-ish tint. 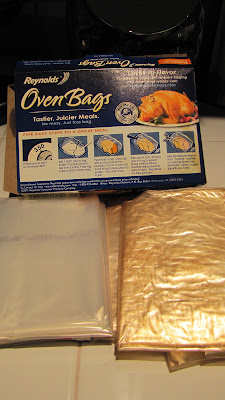 So, off to the store I had to go.  Again.  Thanksgiving can only get better from here, right?  :)
Posted by Chrissy @ Adventures in DIY at 12:35 AM

Email ThisBlogThis!Share to TwitterShare to FacebookShare to Pinterest
Labels: Holidays