As I previously mentioned in this post, I was lucky enough to go to the Cast Member (employee) preview of the new Cars Land at Disney's California Adventure before it opened to the public.  They didn't allow any pictures or video to be taken and they even restricted anyone from posting on social websites about it!  I was totally bummed about that.  But, I recently took time off from work when one of my besties came out to visit with her family.  One of the places we went to was Disneyland & California Adventure (it was a 1st time visit for their 3 kids!).   We checked out the new Cars Land & the new Buena Vista street while there, so I was finally able to get some pictures and thought I'd give a review of the new areas while I'm at it (*Spoiler Alert - if you want to be surprised as to what happens on the rides, do not read ahead*).

We got to the park about 30-45 minutes after it opened and I was surprised that there was a huge line just to get a Fastpass for the Radiator Springs Racers ride.  It is a great ride, but I was still surprised at this.  When we walked by later, we saw that the Fastpasses were sold out by 10:30 or 11am!  So, my advice to you if you want to be able to get on this ride, is to get there when the park opens and either get in line right away or get a Fastpass right away.  It truly is a great ride, but since the wait times were from 90-120 minutes (yikes!), we didn't go on it.  I felt bad for the kids because they didn't get to ride it, but hey - they'll just have to come back so we can go again.  :)  Here are some pictures of the ride. 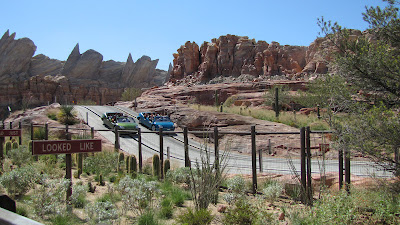 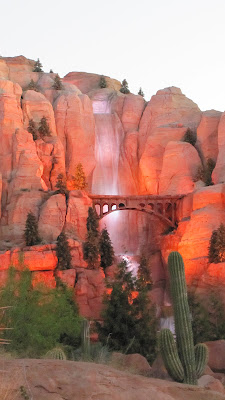 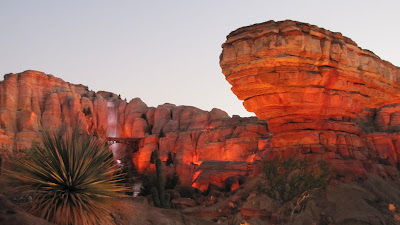 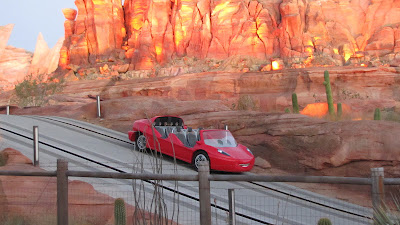 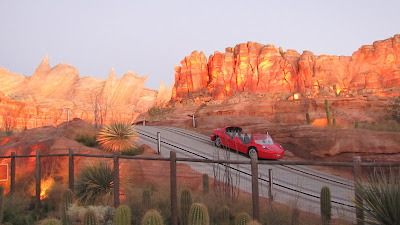 It's so amazing how authentic the "desert" looks here.  Disney's attention to detail is truly amazing - that's why I'm such a huge fan of their theme parks.  When you first get in your "Car", you cruise in the desert,  past the waterfall, and then enter inside a building.  The different "Cars" movie characters are inside - they move and talk - it's pretty amazing how far technology has come.  Then, your car either goes through Luigi's shop for new tires or Ramone's shop for a paint job and then your car is put side by side another car and then you race against them.  It's really fun and at the end, if you're the winner, your car lets you know.  They do have a single rider line on this ride - when my friend and I went on it, we chose to do the single rider line.  It was only a 15-20 minute wait (as opposed to 60 minutes).  We weren't put in the same car, but our cars raced against each other, so that was fun.

Another new ride in the Cars Land area is Mater's Junkyard Jamboree.   This ride is cute and fun!  You sit in tractor trailers and you get pulled and whipped around in circles - it reminds of a fair ride.  One of the best things about this ride is the spanish safety announcement which is made by Mater himself.  It's hilarious hearing him speak in spanish! 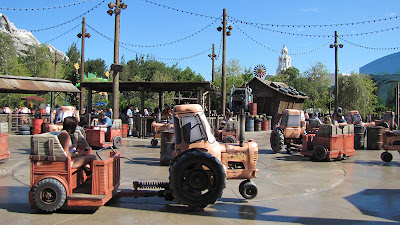 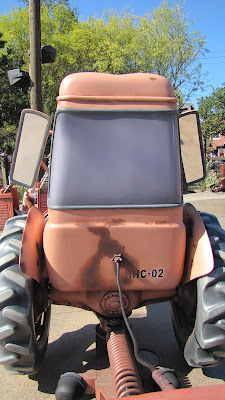 And the third new ride in Cars Land is Luigi's Flying Tires. This is also a fun ride, but I think it's my least favorite.  It requires a little bit of work.  Once you are in the "tires",  you float on air that is pumped through the ground.  You and your partner(s) have to lean together in the direction you want to go.  It ends up being sort of like bumper cars because you bump into the other tires.   They also have a bunch of giant beach balls that you can throw around to the other people on the ride.  It's fun, but there's not a lot of room to move and it's a short ride - would be better if it was longer. 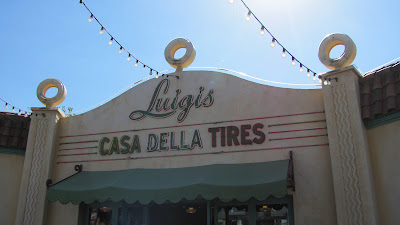 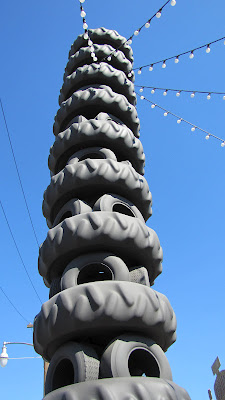 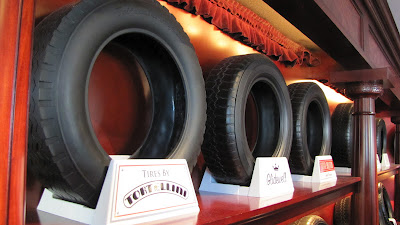 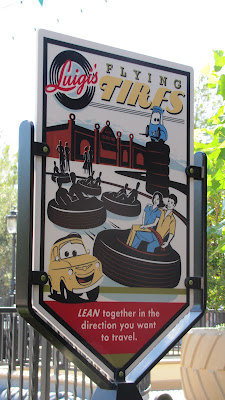 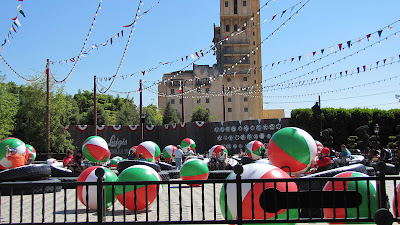 Here are some other scenes from Cars Land... 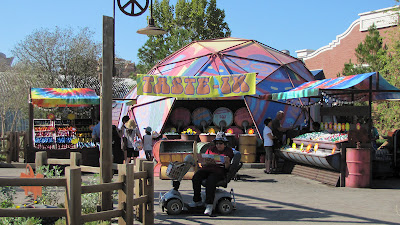 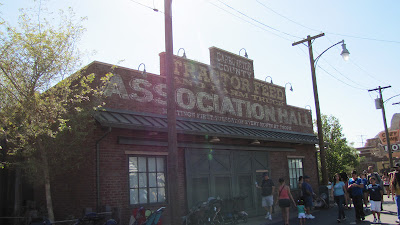 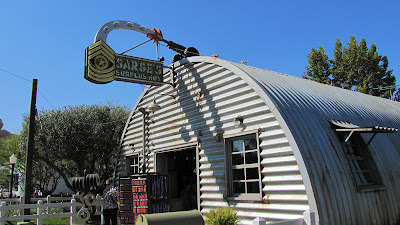 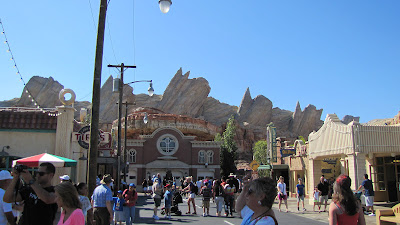 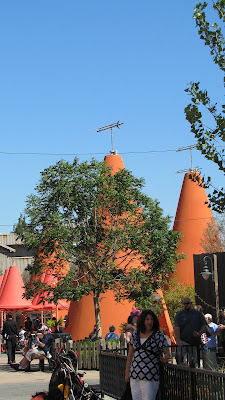 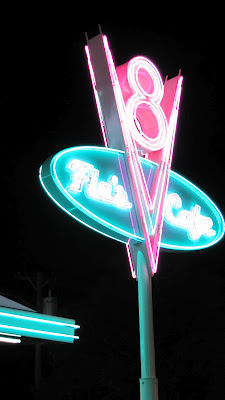 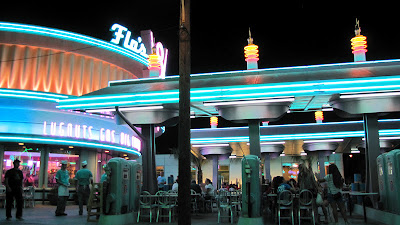 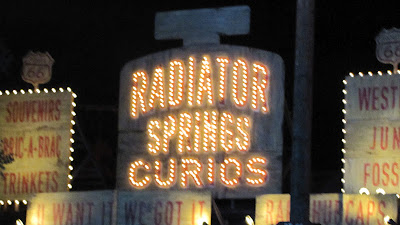 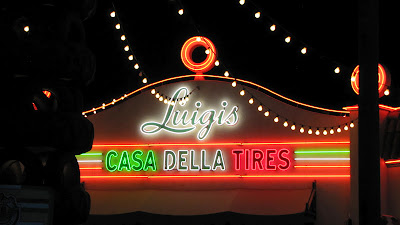 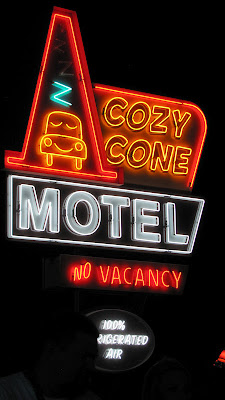 Here are the two main characters that make appearances... 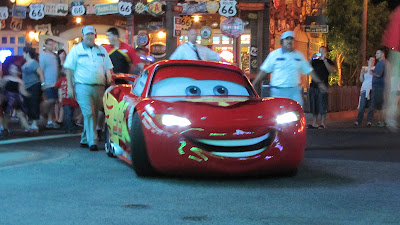 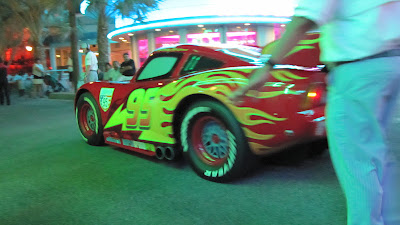 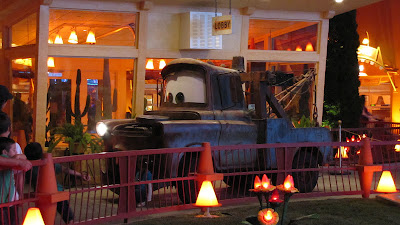 You can also get your photo with them.  And yep!  They do drive & talk - pretty cute!

Another new area in California Adventure is Buena Vista Street.  As soon as you walk through the gates into the park, you are in this new area.  It's very nice - it was built to look like 1920s Los Angeles when Walt Disney first arrived there.  I didn't get a lot of great pictures - it was pretty crowded - and I didn't get to spend much time there.  I look forward to going back soon and getting more pictures and spending more time looking at the details. 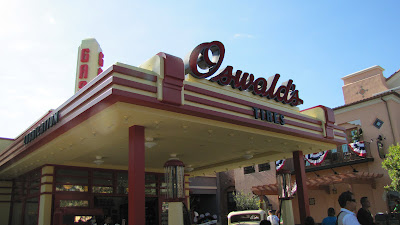 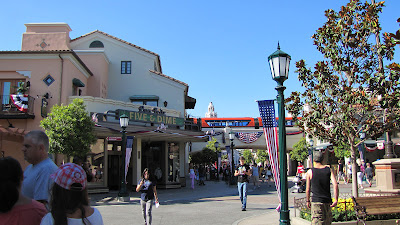 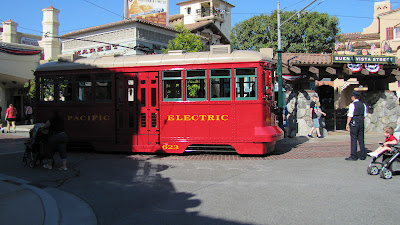 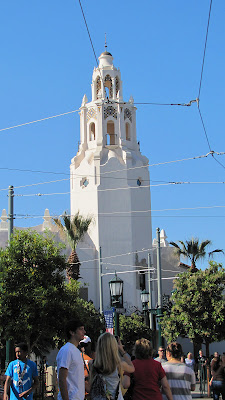 So, all in all, I think the new Cars Land & Buena Vista street is just what California Adventure needed.  They are a great improvement to the park.  I've always thought that it needed more character based rides there and I think more people will enjoying going there now.  I can't wait to go back and explore a bit more.

Thanks for stopping by!
Posted by http://adventuresindiy1759.blogspot.com/
Posted by Chrissy @ Adventures in DIY at 7:20 PM