Hello there!  I hope everyone had a great weekend.  I sure did!  I spent the weekend in San Diego visiting my parents, so I've been M.I.A.  We had a nice visit and got tons of shopping done.  I actually got a lot of stuff that I needed or had been wanting to get and at pretty good prices, so I'm a happy camper!

One of the places we went to was Ikea.  I needed to return a couple of things as well as get a few more things - one of them being a replacement picture frame for my dry erase calendar I made that you can view here.  That was before tragedy struck as seen here.  Very, very sad.  But, I got her all fixed up! 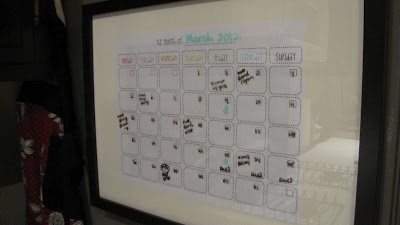 I had remembered seeing picture frame sized glass at Home Depot awhile ago, so originally I had decided to try my luck there.  I did my measurements and found the size that I needed.  It was only a few dollars.  Score! 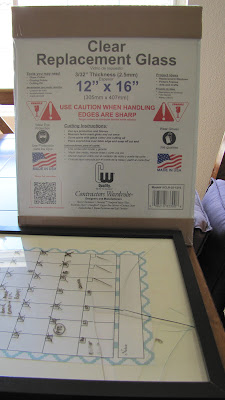 As I ripped open the plastic, thinking how clever I am, my hopes were soon dashed as I tried setting the glass into the opening.  Alas, it didn't fit.  Sighhhhh.  I must not have taken exact measurements (seriously - I was off by a centimeter.  Really?  REALLY??), plus it's an Ikea frame which never really quite works out to the same as regular store-bought frames.  So I made the trip back to Home Depot and returned the glass.  And then I patiently waited until I got the chance to get a replacement frame at Ikea.  Their frames are pretty cheap and I figured that I had to get other stuff there, so why not just get the same exact frame.  (I ended up using the other frame without the glass in it for something else - yay for me and reusing it!)

There were a couple of changes that I made this time around.  I found a different blank calendar that I liked better because the actual boxes were a bit bigger and easier for me to write in.  I found it here at Cutie Pie Printables.  I also hung it from 2 of the little command hooks instead of 1.  I almost had a tragedy before - it actually fell off the hook and onto the counter, but no damage was done (not until it was introduced to my elbow).  And I bought a new set of dry erase markers - they are mini sized and different colors, which should make it more fun.

So, there you have it.  She's all fixed up and ready to go. 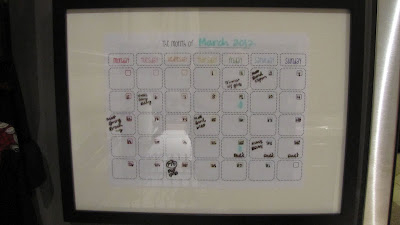 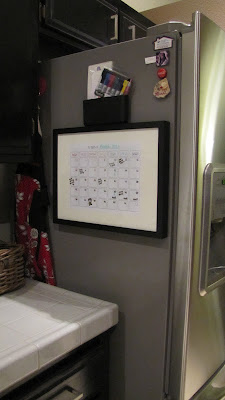 I hope everyone has a good week.  I'll have more projects for you this week.
Posted by Chrissy @ Adventures in DIY at 11:52 PM