While attempting to fix something on a project I had finished, this happened... 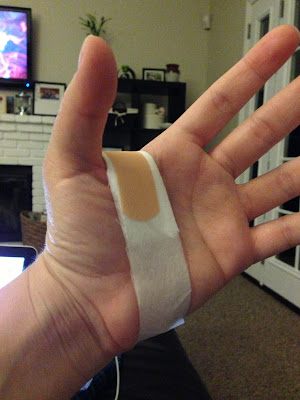 I have spared you the gore.  Just to the right of my thumb, in that little crook, I accidentally stabbed myself with an X-Acto knife.  I tried my best to work the knife in a direction away from other hand, but it slipped and stabbed me.  And I had just broken the tip off of it, so I got stabbed with a non-pointy X-Acto knife!  Oh. my. word.  It's a pretty good cut and I thought I might need stitches, but hopefully I won't.  So, basically that means, I will be laying off the projects for a day or two until this starts to seal up and heal (I don't want it to split open again - yikes!).  I have some projects & posts already in the pipeline, so you'll see a couple of them come across - just know that those were "pre-stabbing".  I guess this will force me to rest and maybe finally start the book I've been wanting to read!