So, this is why I've been in a bit of a DIY slump.  I have officially started painting my french doors.  I actually started them awhile ago - just to test it out and see what I was dealing with (I had to actually think about my strategy and how I was going to deal with the issues below).  But, I had been avoiding doing this project and figured that I just needed to finally dive in and just get on it already.

But here is just a taste of what I'm dealing with and why I was avoiding this project. 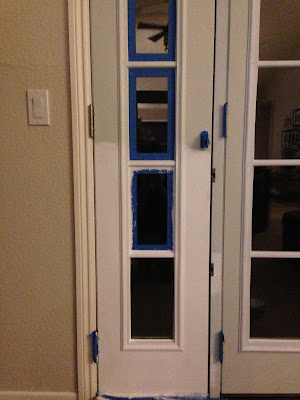 As you can see in the picture above, my french door set also includes two sidelites that open up to allow more airflow without keeping the main doors open.  Each sidelite has 5 windows and each door has 10.  That's a total of 30 little windows.  Taping them off is a pain in the booty, but I think I've got a system down now (it's still a pain though).

And the latches on the sidelites look like this... 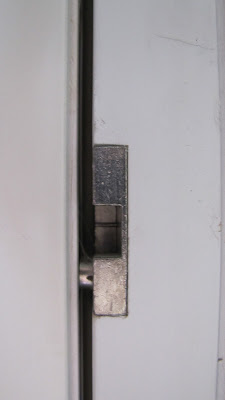 Um, how in the heck am I supposed to tape that off?  They aren't very big and are flush with the surface, but there are 3 per sidelite.  So, I'm having to hand-paint around these with a small artist brush. 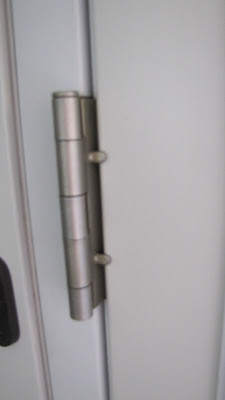 See those little tiny tabs?  Yep - having to hand-paint around those also with the artist brush.  I thought about just taking the doors down and the hinges off, but for several reasons, it's just not an option.

So, these are my issues with painting the french doors and why I've been lagging.    Since the holiday season has just begun, I will probably have to take a break to work on some Christmas gifts, but the doors - they will get done.  I am determined!  Oh, and did I mention that I still have a brand new front door that needs to be painted too?  (save me)

Posted by Chrissy @ Adventures in DIY at 1:31 AM