A few weeks ago, I finally finished one of the projects that I had been working on.  "Technically" it's not really done, but I'm done for now. 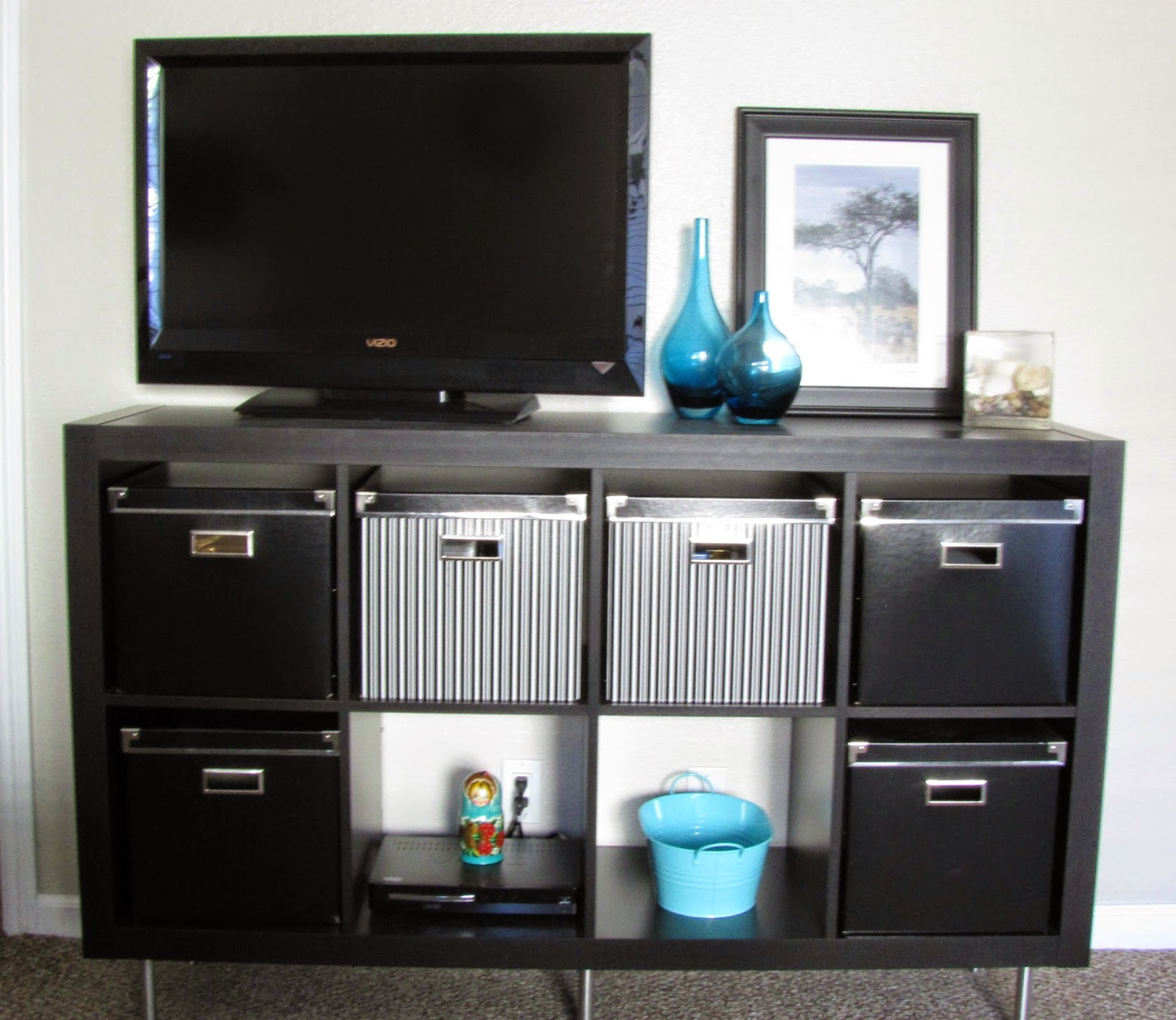 A few months ago, Ask Anna shared how she organizes her DVDs.  I thought it was a great idea, but I wasn't sure that I could part with the DVD cases.  But, after thinking about it for awhile, the idea of it sounded better and better.  I keep my DVDs in the 6 boxes in the TV stand (aka Ikea's Expedit shelf) in the above picture - that's a lot of DVDs!  And although it's nice because they're hidden in the boxes, I liked the idea of having more room to store other things.

Here's the piles of DVD cases that I changed out. 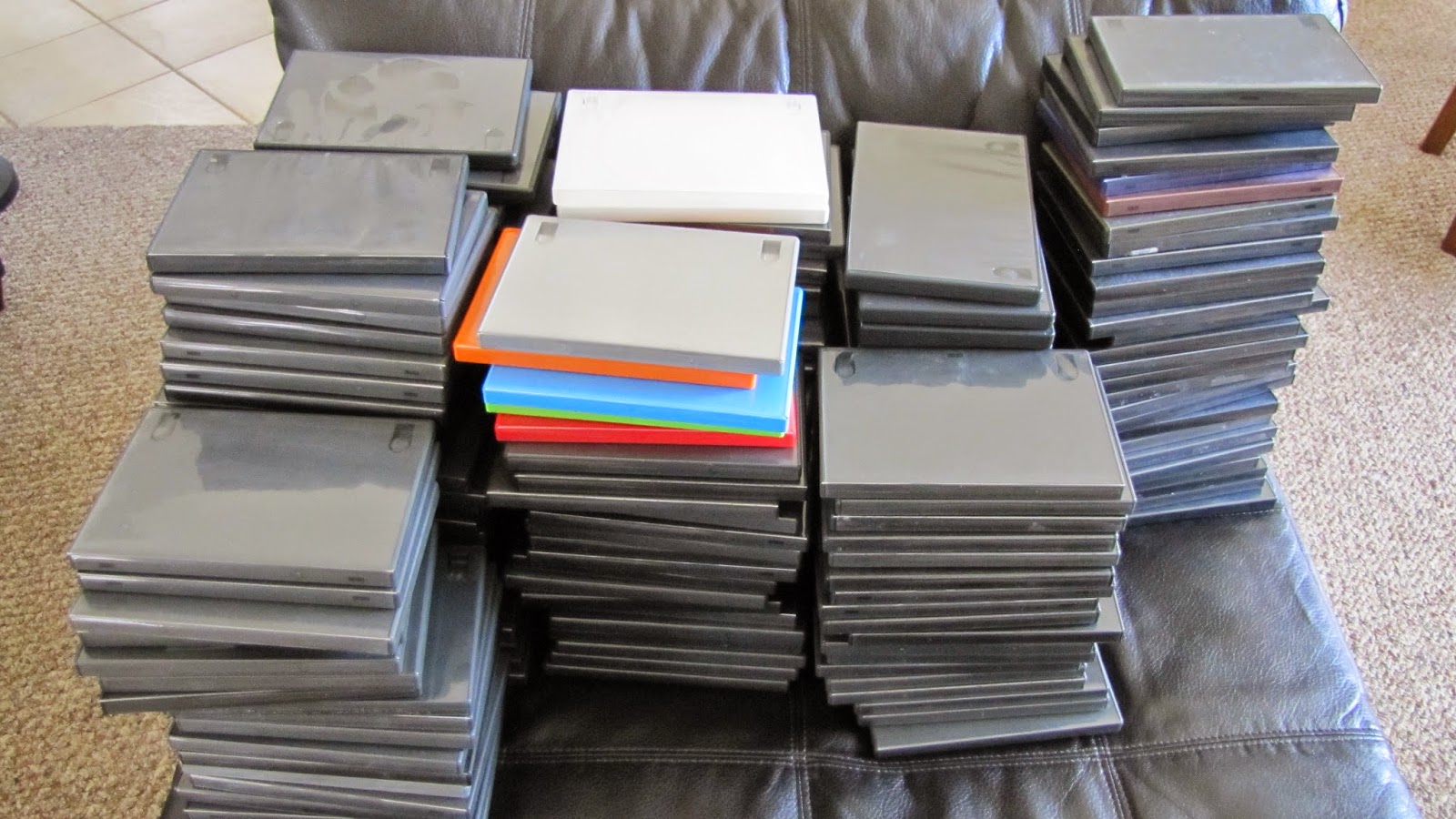 That isn't even all of them - some of the cases were those old cardboard ones, so they got trashed since I had to cut off the cardboard cover. 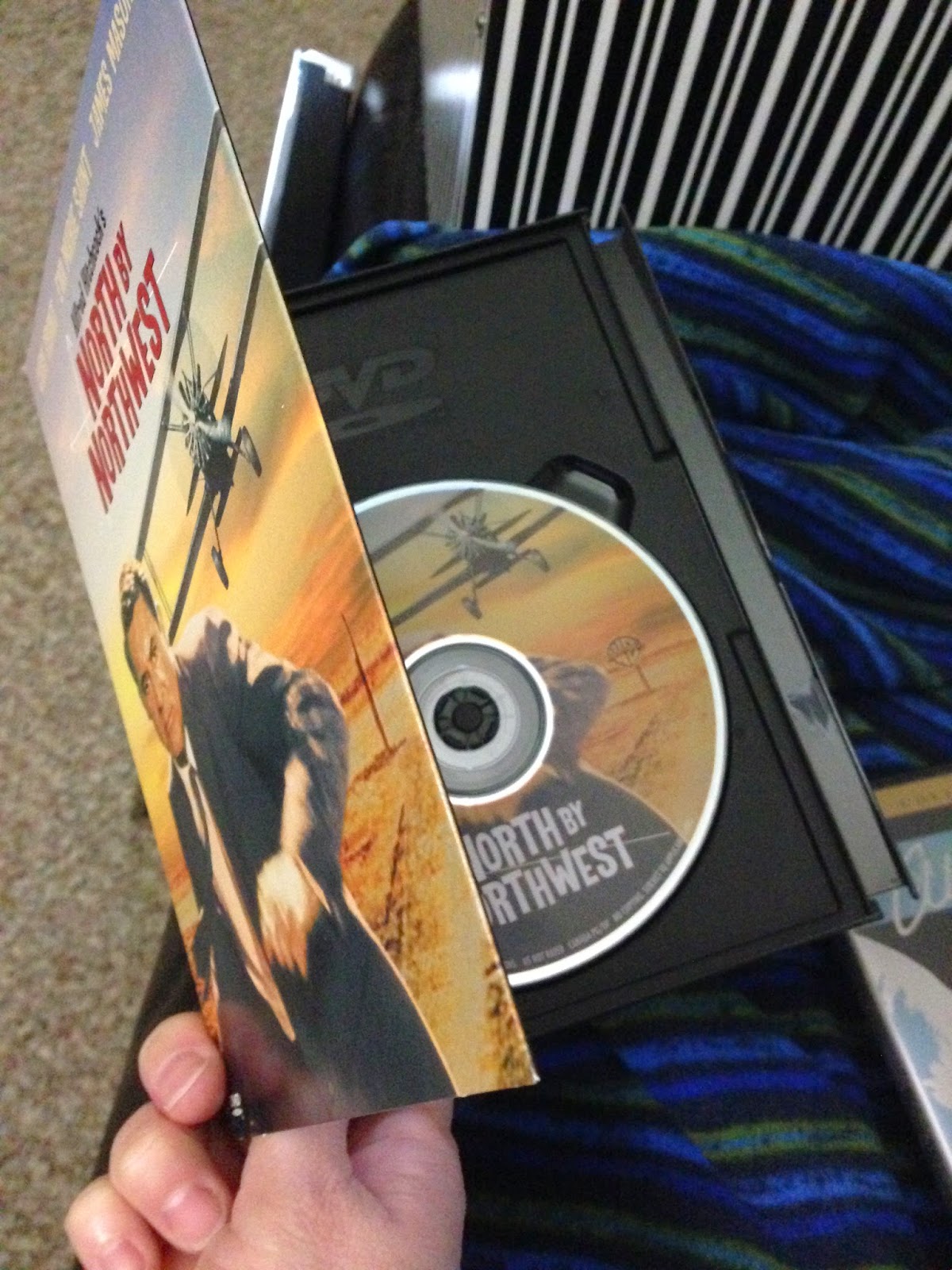 And here's the small piles that these turned into.  Yep - all of the DVDs in these sleeves were once housed in those DVD cases above.  Seems pretty unbelievable, right?  But, it's true! 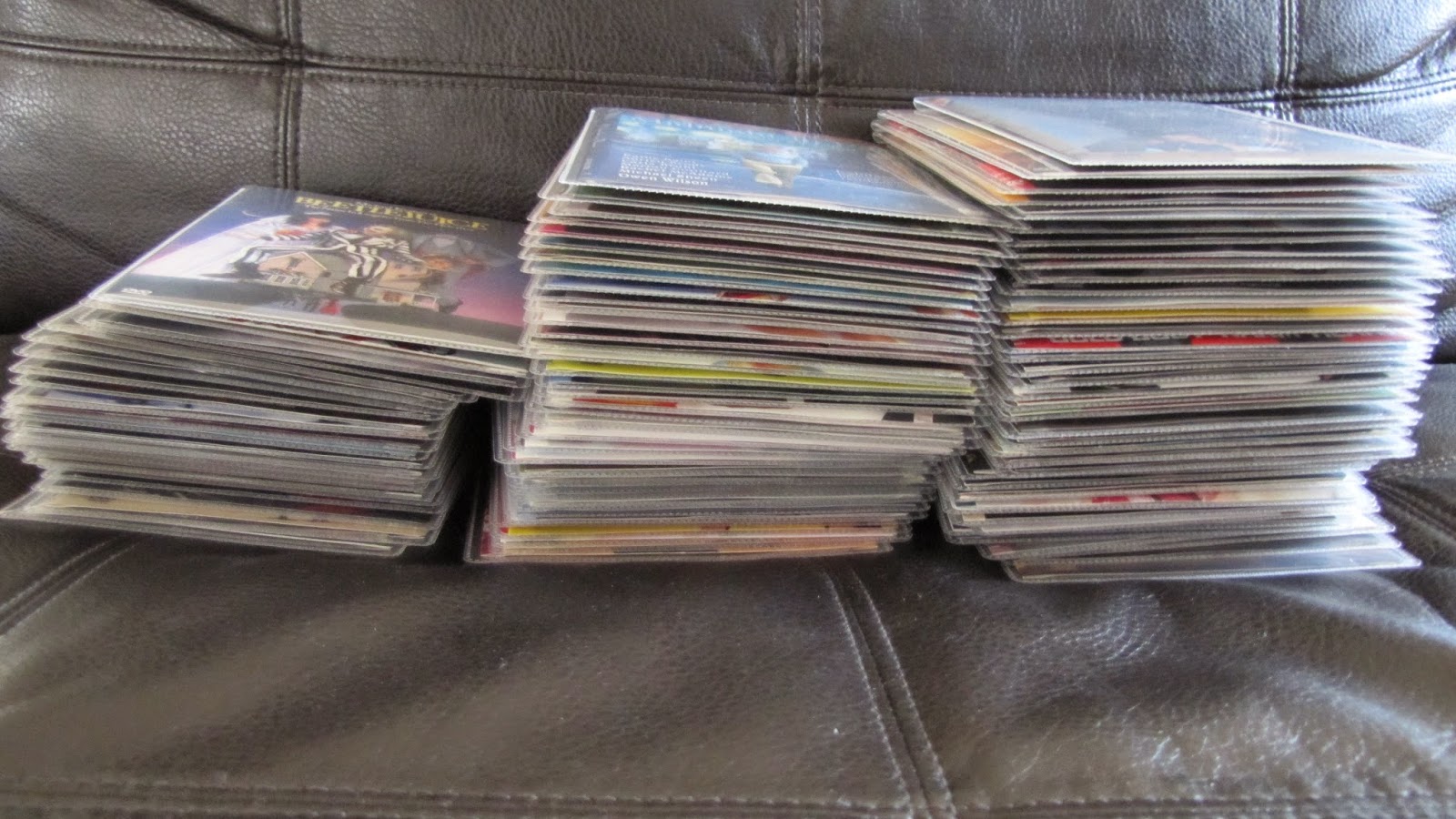 Here's a picture of them side-by-side. 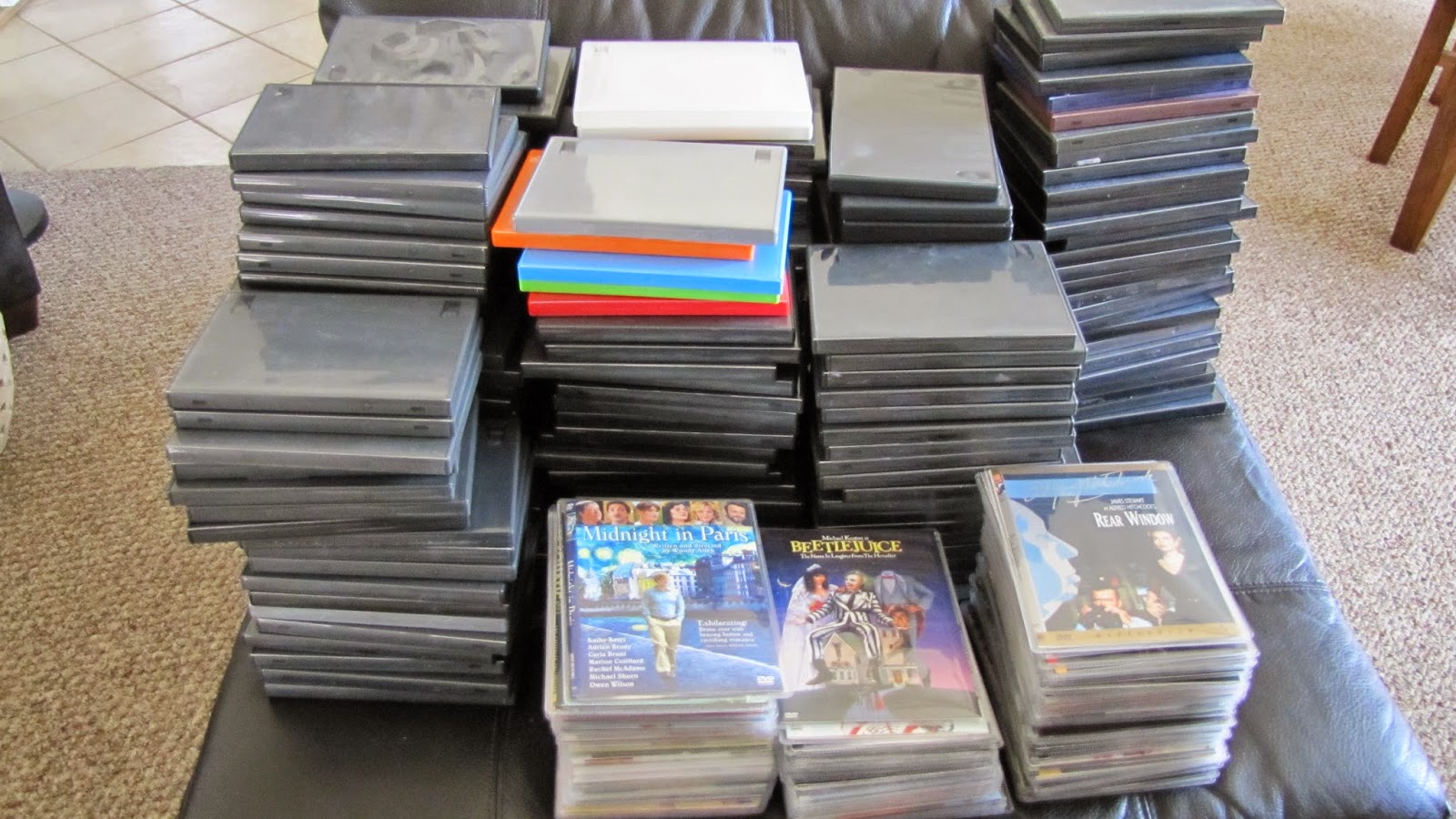 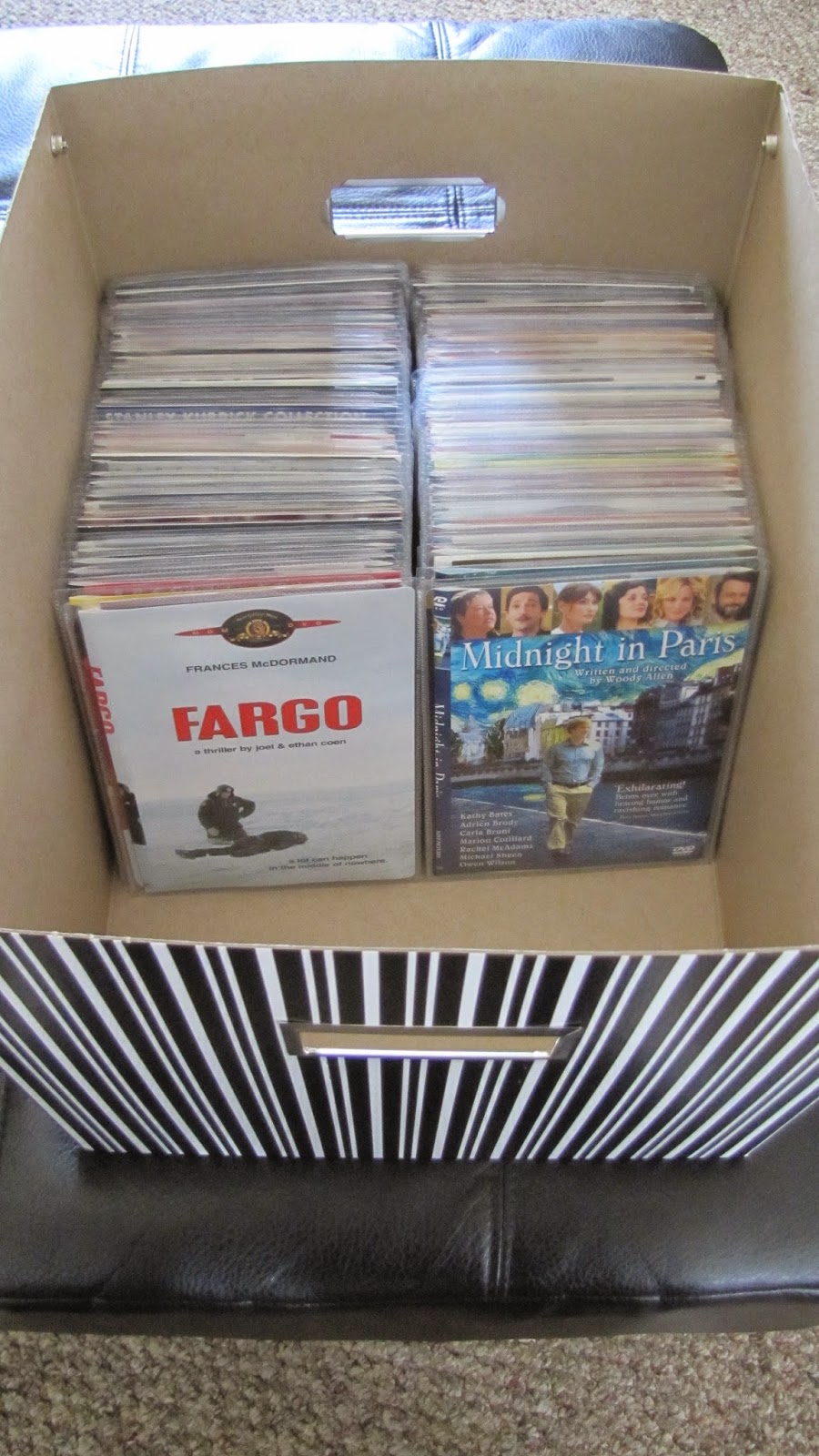 And if you're curious about how I put the paper cover art in the sleeves, I just folded it in half so that the fold creased down the middle of the spine.  I didn't want to cut them in case I decided to give away a movie.  I put the DVDs in between the 2 sets of cover art - so you can see the cover art on each side and know which DVDs are inside.

I put most of the bonus DVDs into these old CD binders that I had.  Remember the days of when we used CDs to listen to music?  And you'd put them into these binders so you could have them with you in your car?  Yep - still have a few of these. 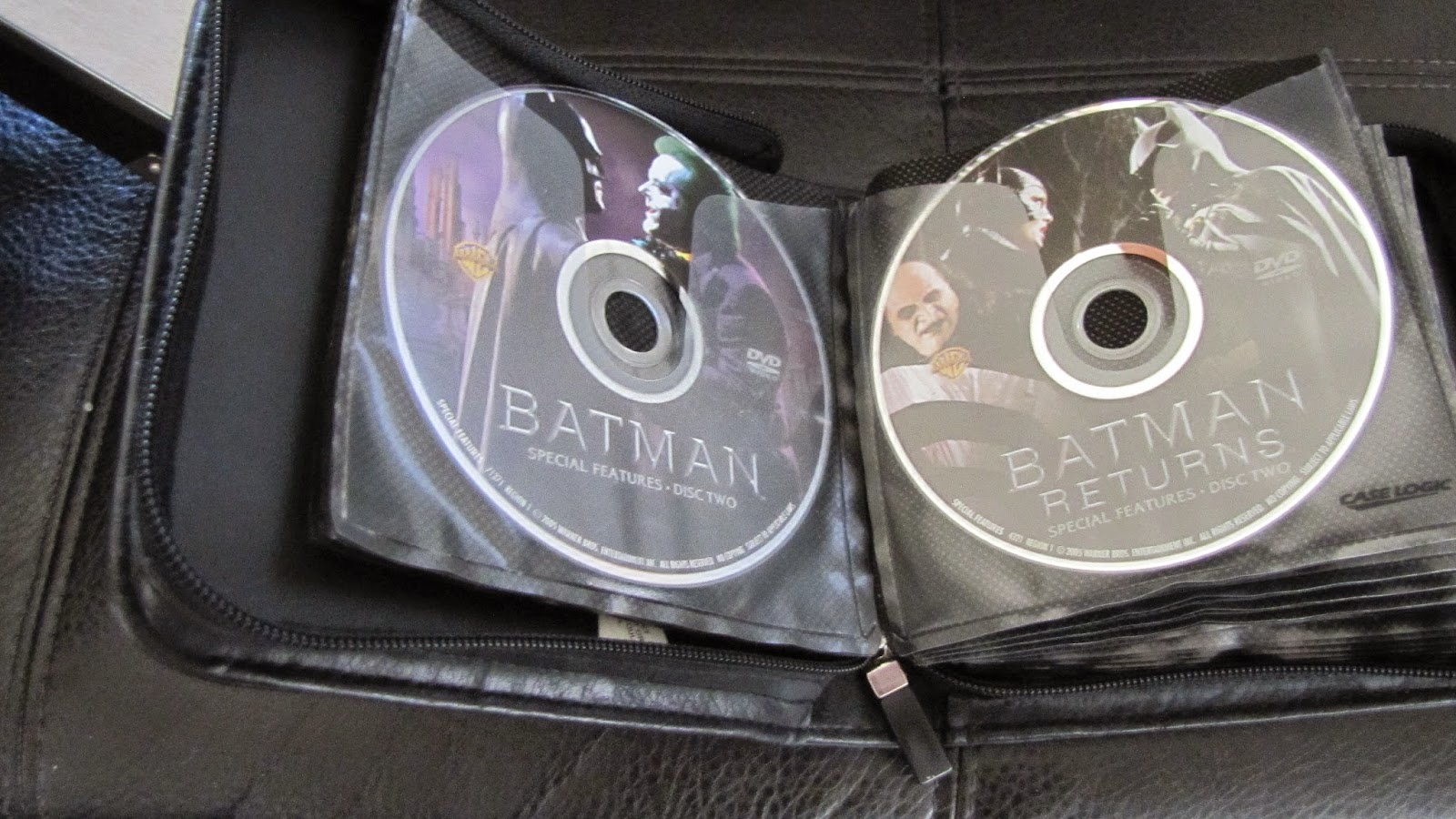 I managed to empty out 2 boxes out of the 6.  I probably could have emptied out a 3rd box, but after filling the other boxes back up with all the TV show sets, etc, I didn't want the boxes to be too heavy, so I spaced them out a bit (those boxes are made of cardboard).  And this is why I say I'm technically not done with this project - I was a bit disappointed that I didn't make as much of a dent as I thought I would have, so I'm thinking to transfer some of those TV show sets into the DVD sleeves since some of the sets take up so much room (I'll need to order more of the sleeves).  We shall see - it's all about "letting go".  But, for now I'm done and it's nice to have a bit more storage.

Originally posted by Adventures In DIY