I've been in a wrapping fury over the last couple of nights, so just a quick mention that Adventures in DIY is now on Twitter!   Ok, ok - it was my personal account that I use to stalk follow celebrities and comedians (seriously, you should check out Steve Martin on there - he's hilarious!), but I occasionally would tweet my own blog posts - just not consistently.  So, I have re-named my Twitter account to match the blog and will be making more of an effort to tweet more often.

At this time, I don't have a Facebook page for the blog.  Facebook is a timesucker and I just don't have a lot of time right now, but maybe one day...

By the way, I'm loving my current selection of wrapping paper that I have.  Lots of kraft, aquas, reds, and greens.  I don't ever want to run out of it! 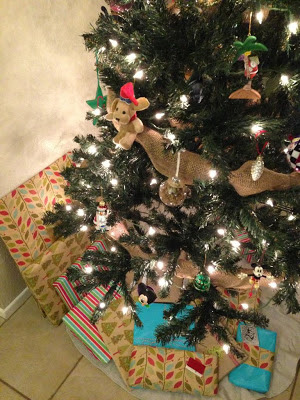 Ok, back to being a wrapping fool!
Posted by Chrissy @ Adventures in DIY at 11:58 PM

Email ThisBlogThis!Share to TwitterShare to FacebookShare to Pinterest
Labels: Blog