What up, 'G? Another Cork Monogram

Hello again - we're almost to the end of another week.  Yes!  I'm ready for some rest after having a long and busy weekend.  I am seriously lacking in my posting these days.  Between working on a semi-big project (painting the fireplace) and April being a big birthday month for family and friends (we're talking 10+ people including myself), I haven't really gotten much else done.

I wanted to stop in and share another cork monogram that I made earlier this week.  A couple of weeks ago, I posted this tutorial on how to make a cork monogram.  It was so simple to do.  So, I decided to make one as a gift for my friend's belated birthday (another April birthday!).  It was actually more difficult to do than the "F" I made, since the "G" has a good curve to it, but I think it came out pretty well if I do say so myself. 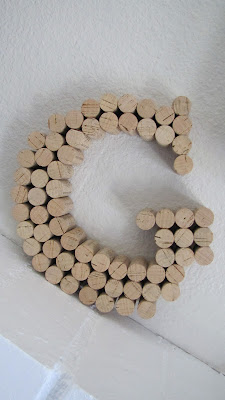 I followed the same process as in the tutorial for the "F" - I just laid out all the corks in an arrangement I liked and one-by-one glued them together.  It was a bit harder on the curves because I couldn't keep the corks exactly as I had laid them out, but it was close enough. 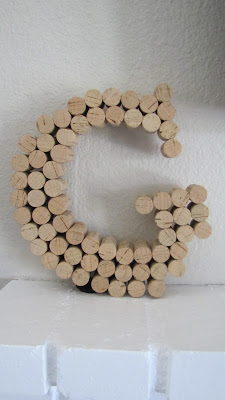 I also wasn't able to make it so that it sat flat on its bottom, so you can see how it tilts to the left a bit.  I was kind of bummed about that, but a hanger can be attached to the back so it can be hung up on a wall instead.

Thanks for stopping by to take a look!  In addition to few quick projects, I'm hoping to start painting my interior doors this weekend.  They are an off-white/cream/dingy color and have never been painted in the 2 1/2 years that I've owned the house, so they are long overdue for an update!

Linked up to:
How to Nest For Less' Just a Party with my Peeps link party

Creatively Living's Tell it to me Tuesday link party

Thanks for stopping by!
Posted by http://adventuresindiy1759.blogspot.com/
Posted by Chrissy @ Adventures in DIY at 11:52 PM