**Update:  for instructions on how to make this cushion, please see my post about how I made my  bench cushion.  Even though the measurements are different, it would be made in the same way.**

Way back over Memorial Day weekend, I took advantage of the sale at Joann's and bought some fabric and foam (that stuff is expensive!) for 50% off.  They were for my master bedroom's window seat and also for a bench I have in my front hallway.

I have been hesitating to make these for a few reasons.  1)  I'm not much of a sewer and sewing a straight line is something that apparently is difficult for me, 2)  Since I'm not much of a sewer, it was going to take a lot of thinking as to how I was going to put this thing together, 3)  How the heck am I going to cut this foam?,  4) It's been super hot and the heat makes me lazy.  Those are some pretty good reasons, right?   But, with the holidays coming up (and for me, they start with Halloween since that is my favorite holiday), I wanted to get some of these projects done so I have time during the holidays for crafts and to just enjoy them.

I didn't take many pictures of all the steps in making this - mostly because I was really concentrating on how in the heck was I going to make this thing and also because I wasn't quite sure if what I was doing was going to work.

First of all, I put the foam onto the window seat and measured where I needed to cut.  I tried using regular scissors, but that barely worked - would have taken me forever.  I decided to try a bread knife and that actually seemed to work.  The only problem with using the knife was that the serrated edges didn't make a clean cut and I also didn't cut very straight (I ended up having to hot glue some of the foam back onto the main cushion I was going to use).  But, it worked - it was a pain, but it worked.  The next step was to lay the fabric over the cushion and cut the fabric so that it would fit the cushion (with some extra for seams and any mistakes).  Then, I pinned the first 2 pieces together by lining up the edges and started sewing. 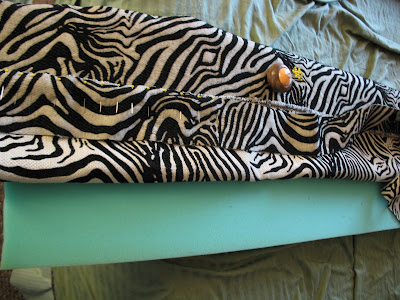 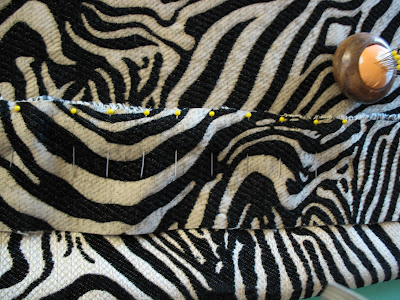 For the rest of the pieces, I had to measure from the seam that I sewed to the length I needed for each side and pinned at that spot so I would know where to sew.  It was a really pain-in-the-butt process (I'm sure there is an easier way, but this is how I attempted it since I didn't know any better).  Because this fabric has a lot of texture to it and because I would only be using it for when I get dressed or putting on shoes, there shouldn't be a lot of wear & tear on it, so it wouldn't need to be washed.  So, I ended up just leaving the end open so I could stuff the foam in (wow, was that an experience!) and then hand-sewed the end closed. 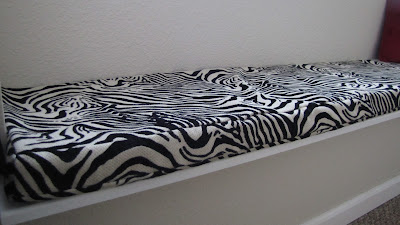 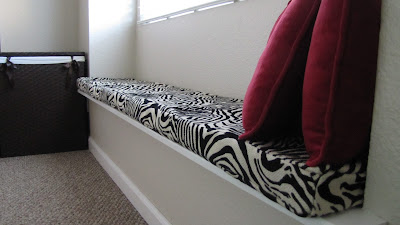 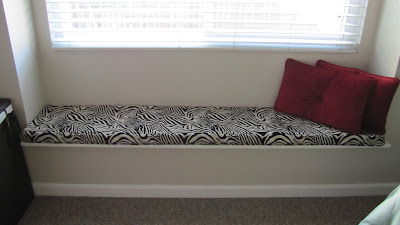 It actually turned out pretty well considering this is my first time making something like this!  I'm so glad it's finally done!

Since this was a learning experience and I now know what works and doesn't work, I have a plan for when I make the bench cushion.  I will measure the fabric and cut exactly the amount I need including allowance for the seams - this will eliminate the need for measuring during the pinning & sewing process (that took too much time).   I also bought one of those rotary cutters (I think that's what you call them) & cutting mat so I can make a nice straight cut.  Hopefully the next one will go a lot smoother!